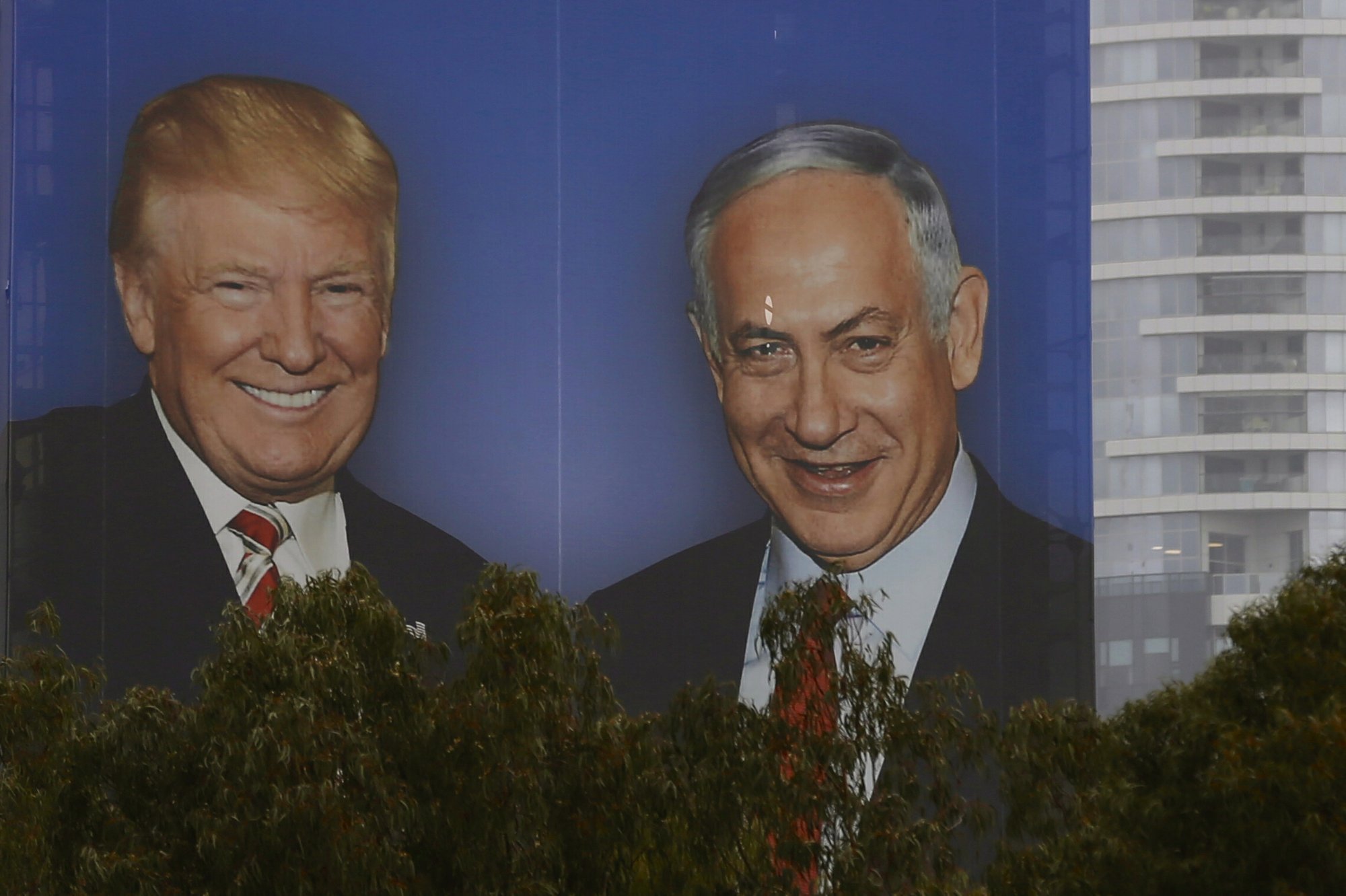 Drawing clear inspiration from Trump, Netanyahu’s Likud party has plastered huge billboards of the two leaders together and launched a Trump-like weekly webcast to counter what it calls the “fake news” industry.

The campaign reflects Trump’s popularity in Israel, one of the few countries where an alliance with the American president is considered a political asset. But it also risks undermining the traditional bipartisan support for Israel among Americans.

Despite his troubles at home, Trump has earned the appreciation of most Israelis by recognizing Jerusalem as their capital and moving the US Embassy there. Trump has further impressed Israelis by backing out of the international nuclear deal with Iran, re-imposing stiff sanctions on the Islamic Republic and vigorously defending Israel in international forums.

“This administration, not just Trump, has been the friendliest administration to Israel since 1948,” said Michael Oren, a deputy minister and former ambassador to Washington. “Netanyahu is just tapping into these current global trends of people living in a world of uncertainty who want strong, sometimes brutally strong, leaders.”

Netanyahu and Trump enjoy strong personal rapport. Netanyahu also seems to relish the American president’s attitude toward the Middle East, not only on Iran but also his hands-off approach to the Palestinian issue and Israeli settlement construction. After an icy eight-year relationship with Barack Obama, Netanyahu has gone out of his way to praise Trump at every turn.

He also has held his tongue on Trump’s various scandals, even after a neo-Nazi march in Charlottesville, Virginia, when Trump appeared to defend the actions of white supremacists. On a visit to Washington, Netanyahu even implored critics to stop questioning Trump over the supposed anti-Semitism of some of his supporters.

While Trump’s isolationism, particularly his planned pullout from Syria, may not be good for Israel, his unabashed pro-Israel rhetoric has made him popular domestically, said Nahum Barnea, one of Israel’s most influential columnists.

Beyond a confluence of interests, Trump and Netanyahu seem to share a populist streak against their countries’ more liberal establishments — to the delight of their nationalist bases.

Netanyahu has responded to a series of corruption investigations with Trump-like attacks on Israeli media, law-enforcement, judiciary and other “elites” he believes are bent on his removal. He is quick to deride any critic as a “leftist,” and, like Trump, has taken to social media to whip up his base.

“Netanyahu is a person who knows how to learn and imitate others and he’s been doing it in the past two-three years since Trump rose to power,” said Barnea. “He’s been far harsher in his domestic expressions and he knows that you create a political victory by pitting one sector against another.”

Trump, who endorsed Netanyahu in a fawning pre-Israeli election clip in 2013 — even before he got into politics — appears to equally admire the Israeli leader.

On Instagram, Trump shared an image of the giant billboard over the Ayalon highway in Tel Aviv featuring the two smiling and shaking hands under the slogan “Netanyahu. In a different league.”

More significantly, he is expected to host Netanyahu in a lavish state visit to Washington shortly before the April 9 election in Israel.

In response to the billboard ads, Valerie O’Brien, spokeswoman for the US Embassy in Israel, clarified that the US was “not involved in Likud’s campaign messages or strategy.”

While beneficial in the short-term, some warn the tight alignment with Trump could have negative long-term implications.

Israel, once a source of solid bipartisan support, has become an increasingly divisive issue among Americans in recent years. A poll conducted by the Pew Research Center last year, for instance, found Republicans more sympathetic to Israel than Democrats by a nearly 3-to-1 margin. Some fear an eventual backlash from Democrats.

“The more that Democrats don’t like Trump, the more that anything he associates himself with, in this case Netanyahu, gets drawn into that equation,” said Ron Klein, a former congressman who now chairs the Jewish Democratic Council of America. “For those of us who are pro-Israel, that’s unhealthy.”

Netanyahu is not alone in tapping into Trump’s appeal.

Likud backbencher Oren Hazan recently said the highlight of his term was the selfie he took with Trump during a 2017 visit. Even Netanyahu’s top challenger, former military chief Benny Gantz, chose a campaign slogan — “Israel Before Everything” — that many viewed as echoing “America First.”

But only Netanyahu has molded his politics in Trump’s image.

He has long had a rocky relationship with the media and accuses it, along with police and prosecutors, of being part of a “leftist” witch hunt to force him from office. Like Trump, he has also gone after former allies, floating conspiracy theories about an alleged planned putsch by a Likud rival.

The prime minister appears to be modeling his recent launch of “Likud TV” on Trump’s “Real News Update,” a weekly webcast on Facebook hosted by the president’s daughter-in-law to counterbalance what the administration deems a hostile media. Netanyahu’s first clip made dismissive references about police investigations into alleged corruption by the prime minister.

Police have recommended indicting Netanyahu on three corruption cases, and Israel’s attorney general is expected to announce his decision whether to charge him before the elections.

Back in 2009, it was Obama who offered inspiration to Israeli campaigners. An ultra-Orthodox Jewish party translated “yes we can” into its campaign slogan and Netanyahu designed his Web page after Obama’s. But a decade later, Trump is the hot commodity.

“It’s part of the Americanization of our politics. The difference is that Israeli campaigns stole tactics from Obama but still maintained a certain distance from him,” said Barnea. “Trump is considered ‘one of us.’”