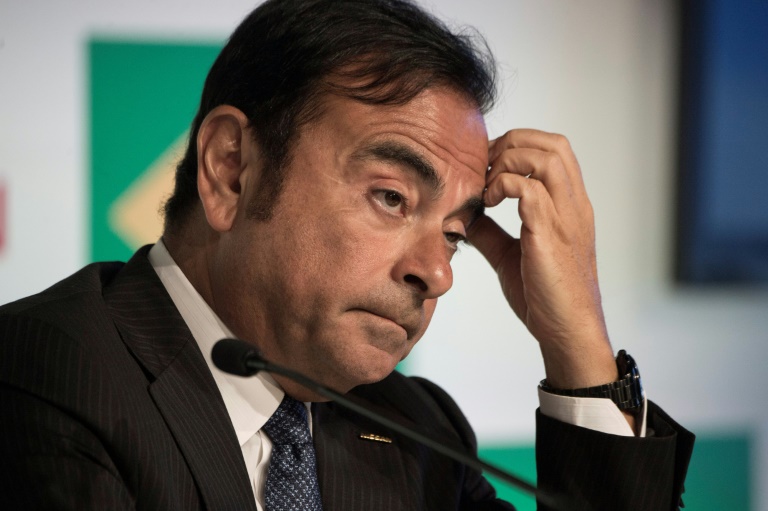 Nissan and Mitsubishi shares plunged Tuesday, as the automakers prepared to oust chairman Carlos Ghosn a day after he was arrested for alleged financial misconduct.

Details began to emerge about the allegations against Ghosn, whose arrest sent shockwaves through the auto industry, including claims that “huge sums” were spent on homes for him in four countries.

His legacy appeared in danger of total collapse, with his own handpicked successor as Nissan CEO accusing Ghosn of accruing too much power, in what he called the “dark side” of his leadership.

The spectacular fall of the Brazil-born executive, which Japan’s top government spokesman called “truly regrettable,” also raised questions about the future of the sometimes fractious alliance he led of Nissan, Mitsubishi and Renault.

Nissan and Mitsubishi have said they will propose his removal as chairman, with Renault’s board also meeting to discuss his fate.

The automakers and Japanese government officials said they would work to protect the alliance.

On Tuesday there were still many unanswered questions about the allegations against a man long credited with an almost magical ability to turn around ailing auto companies.

Nissan CEO Hiroto Saikawa said a months-long investigation prompted by a whistleblower had uncovered years of financial wrongdoing, including under-reporting of Ghosn’s salary and misuse of company assets.

Prosecutors said they were holding him as they probed allegations he had under-reported his income by around five billion yen ($44.5 million) over five years.

Public broadcaster NHK reported Nissan has provided Ghosn with houses in four countries “without any legitimate business reason,” and that Nissan paid “huge sums” for the homes in Rio de Janeiro, Beirut, Paris and Amsterdam.

It also reported that some compensation due to other executives ended up going to Ghosn, without specifying how the process had worked.

At the close of Tokyo trade, Nissan was down 5.45 percent while Mitsubishi had fallen 6.84 percent.

‘It’s all about money’

The shock of Ghosn’s arrest was compounded by the harsh language leveled against him by Saikawa, who in a news conference accused the titan of accruing too much power.

“Too much authority was given to one person in terms of governance,” he told reporters at Nissan’s headquarters in Yokohama on Monday. “I have to say that this is a dark side of the Ghosn era which lasted for a long time.”

It was an almost unthinkable turn of events for Ghosn, 64, who had earned a virtually unparallelled reputation, particularly in Japan, for his role in resurrecting Nissan.

Ghosn has dominated the country’s corporate landscape, and is a well-known figure among the Japanese public, who know him as “Mr Fix It”, partly through a popular manga comic of his life story.

But the tables had turned Tuesday, with the Yomiuri Shimbun describing executives at Nissan slamming Ghosn as “greedy”.

“He says the right things, but in the end it’s all about money,” the daily quoted senior employees as saying.

It was unclear how long Ghosn could be held, or even when prosecutors would officially announce the charges against him.

Local media reported prosecutors had negotiated a plea bargain for only the second time since Japanese law changed this year that would allow Nissan officials who are cooperating to receive lesser charges or lighter penalties.

Nissan said the ongoing investigation had uncovered years of misconduct by Ghosn and Representative Director Greg Kelly but refused to be drawn on whether other people were involved, saying only: “These two gentlemen are the masterminds, that is definite.”

The news sparked concern in France, where the state owns a 15 percent stake in Renault. President Emmanuel Macron said Paris would be “extremely vigilant” about the stability of the firm and its three-way tie-up.

Despite his international renown and rock-star status, particularly in Japan, where he was a rare foreign-born executive, Ghosn was not without detractors.

He earned admiration but also anger for his ruthless restructuring at firms like Nissan, and was nicknamed “Le Cost Cutter” in France.

And his pay packet was regularly the subject of criticism, including at Renault, where it sparked a spat with shareholders.