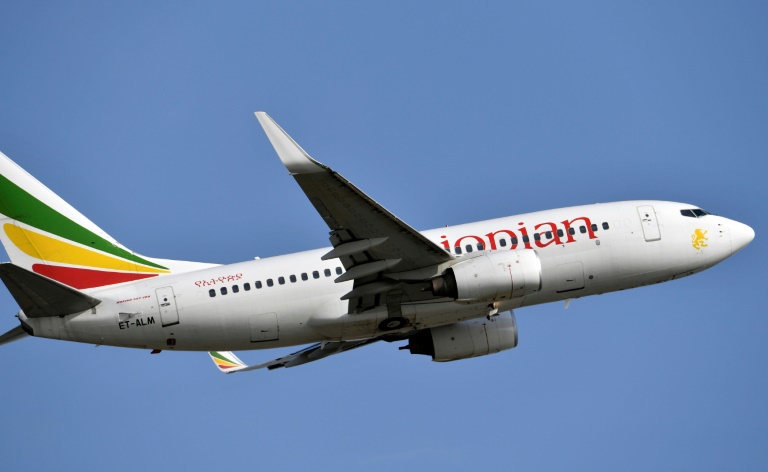 “We hereby confirm that our scheduled flight ET 302 from Addis Ababa to Nairobi was involved in accident today,” the airline said in a statement, later confirming a report by Ethiopia’s FANA Broadcasting Corp that there were no survivors.

“It is believed that there were 149 passengers and eight crew on board the flight,” it said.

The airline has not provided information on passengers’ nationalities but there are reports people from 33 countries were on board. The crash came on the eve of a major, annual assembly of the UN Environment Programme opening in Nairobi.

State-owned Ethiopian Airlines, Africa’s largest carrier, said the plane had taken off at 8:38 am (0538 GMT) from Bole International Airport and “lost contact” six minutes later near Bishoftu, a town some 60 kilometres (37 miles) southeast of Addis Ababa by road.

The weather in the capital, according to an AFP reporter, was clear when the brand-new Boeing plane, delivered to Ethiopia last year, plane took off.

The Boeing came down near the village of Tulu Fara outside Bishoftu.

An AFP reporter said there was a massive crater at the crash site, with belongings and airplane parts scattered widely.

Rescue crews were retrieving human remains from the wreckage.

Police and troops were on the scene, as well as a crash investigation team from Ethiopia’s civil aviation agency.

In the Kenyan capital, family members, friends, and colleagues of passengers were frantically waiting for news at Jomo Kenyatta International Airport (JKIA).

“I am still hoping that all is fine, because I have been waiting for my sister since morning and we have not been told anything,” Peter Kimani told AFP in the arrivals lounge over an hour after the plane was scheduled to land at 10:25 am local time.

His sister is a nurse who he said had gone to Congo. “She travels a lot on missions.”

“We are still expecting our loved one from Addis… we have just received news that there is a plane that has crashed. We can only hope that she is not on that flight.”

Hoping for the best

Among those waiting, Khalid Ali Abdulrahman received happy news about his son, who works in Dubai.

“I arrived here shortly after 10:00 am and as I waited, a security person approached me and asked me which flight are you waiting for. I answered him quickly because I wanted him to direct me to the arrivals, so I told him Ethiopia, and then he said: ‘Sorry, that one has crashed’.”

“I was shocked, but shortly after, my son contacted me and told me he is still in Addis and did not board that flight, he is waiting for the second one which has been delayed,” Khalid told AFP.

“I am waiting for my colleague, I just hope for the best,” added Hannah, a Chinese national.

African Union commission chief Moussa Faki Mahamat said he had learnt of the crash “with utter shock and immense sadness.

“Our prayers are with the families of the passengers + crew as authorities search for survivors. I also express our full solidarity with the Govt & people of Ethiopia,” he said on Twitter.

Ethiopian Prime Minister Abiy Ahmed’s office tweeted it “would like to express its deepest condolences to the families of those that have lost their loved ones.”

Kenya’s President Uhuru Kenyatta said he was “saddened” by the news, adding: “My prayers go to all the families and associates of those on board.”

Mahboub Maalim, executive secretary of the IGAD East African bloc, said the region and the world were in mourning.

“I cannot seem to find words comforting enough to the families and friends of those who might have lost their lives in this tragedy,” he said in a statement.

For its part, the plane’s maker, US giant company Boeing, said it was “aware” of the accident “and is closely monitoring the situation.”

Ethiopian Airlines said it would send staff to the accident scene to “do everything possible to assist the emergency services.”

It would also set up a passenger information centre and a dedicated telephone number for family and friends of people who may have been on the flight, while Kenya’s transport minister said officials would meet and council loved ones waiting at JKIA.

The Boeing 737-800MAX is the same type of plane as the Indonesian Lion Air jet that crashed last October, 13 minutes after takeoff from Jakarta, killing all 189 people on board.

The last major accident involving an Ethiopian Airlines passenger plane was a Boeing 737-800 that exploded after taking off from Lebanon in 2010, killing 83 passengers and seven crew.

According to reports, Boeing delivered the plane to Ethiopian Airlines last November.

Lion Air jet should have been grounded before fatal flight, Indonesia says