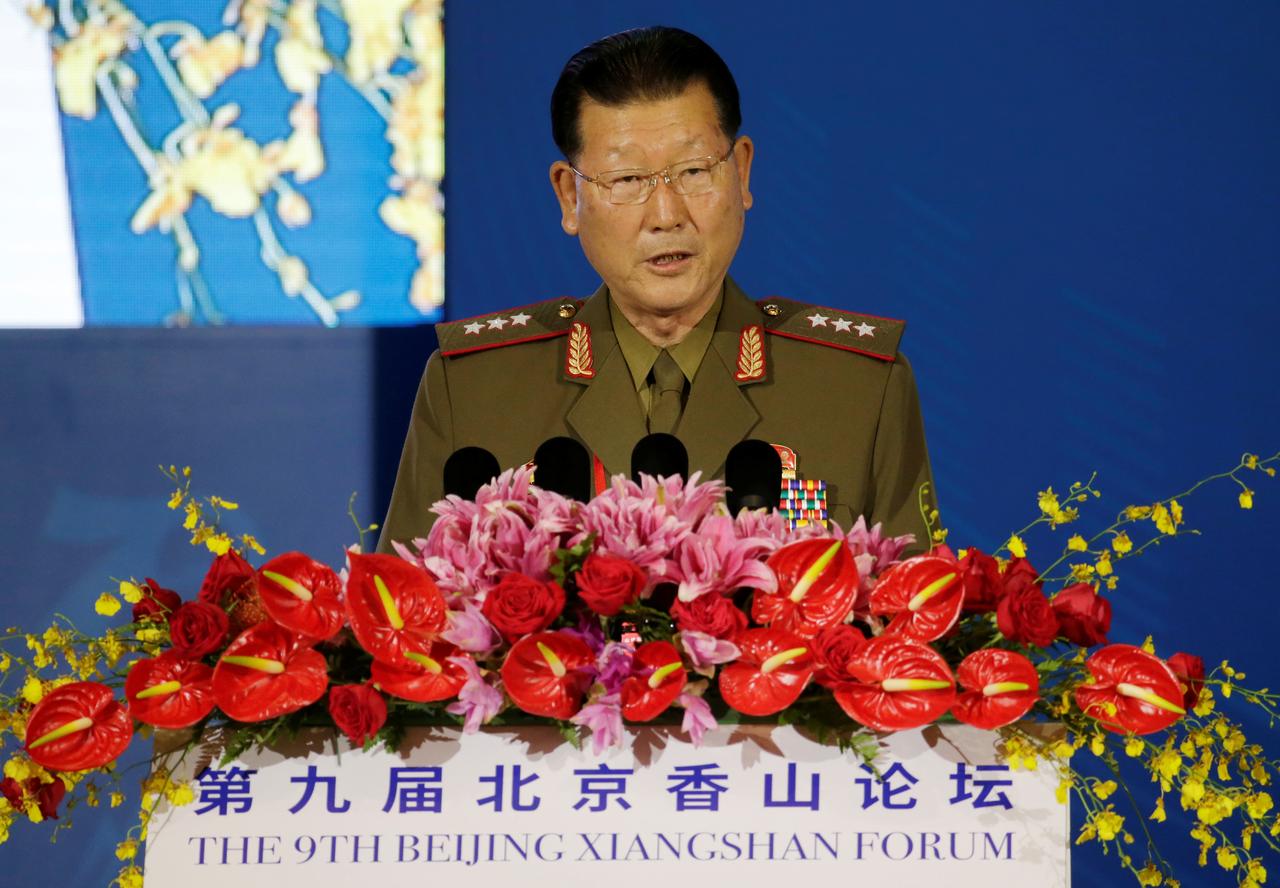 BEIJING (Reuters) – The United States and South Korea must produce new solutions for the current standoff on the Korean Peninsula, a senior North Korean military official said on Monday, warning that hostile policies towards Pyongyang would lead to serious consequences.

The remarks add to recent comments from Pyongyang expressing discontent at the lack of progress in its negotiations with Washington. This month North Korea issued a veiled threat about ending the freeze in long-range missile testing amid continued economic sanctions and pressure aimed at pushing it to give up its nuclear and ballistic missiles programs.

Kim Hyong Ryong, North Korea’s Vice Minister of the People’s Armed Forces, said at the Xiangshan Forum in Beijing that North Korea has worked to build lasting piece but that the situation has relapsed into a “dangerous, vicious cycle” of exacerbating tensions because of the actions of the US and South Korean governments.

“Though it has been more than one year since the DPRK-US joint statement was adopted, there is no progress in improving bilateral relations between the two countries, completely because of the US’ anachronistic, hostile policies against the DPRK,” Kim said, referring to his country by the initials of its formal name, the Democratic People’s Republic of Korea.

He also accused South Korea of a “double-dealing attitude” in continuing to carry out military drills with the U.S. and buying advanced military equipment.

“Bearing in mind our firm will to safeguard peace in the region, the United States and the South Korean authorities must refrain from any actions disrupting the stability of the situation and come up with a new way for solving the problem,” Kim said.

North Korea has conducted missile tests in recent months, including that of a submarine-launched ballistic missile, and broke off the latest working-level nuclear talks with the US in early October.

Pyongyang’s top negotiator for the talks blamed the US for the breakdown and said Washington “brought nothing” to the negotiating table.

Pyongyang has so far stuck to a freeze in testing of nuclear weapons and intercontinental ballistic missiles that has been in place since 2017 and allowed for three meetings between its leader, Kim Jong Un, and US President Donald Trump since last year.

North Korean state media reported last week on Kim Jong Un’s visit to Mt Paektu, the spiritual homeland of the Kim dynasty, and that his aides are convinced the leader plans “a great operation,” which experts say may signal a major shift in Pyongyang’s stance towards the US in the coming months.

Some analysts say possible North Korean actions could include another space launch or an intercontinental ballistic missile test.