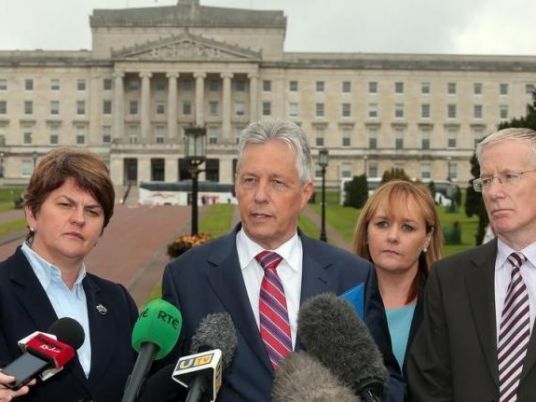 Britain and Ireland sought to calm Northern Ireland's political crisis on Friday by urging Protestant unionists and Catholic nationalists to shore up a power-sharing government that ended decades of sectarian violence.
The British province's autonomous administration is on the brink of collapse after a murder linked to former members of the paramilitary Irish Republican Army (IRA) prompted its first minister, Peter Robinson, to step aside.
British Prime Minister David Cameron called the situation "extremely worrying and difficult", while his Irish counterpart Enda Kenny said there was only a "limited opportunity" to avert the collapse of the administration, with lasting consequences.
The power-sharing government was established under the 1998 Good Friday peace deal that ended what had become known as "The Troubles": three decades in which 3,600 people died in tit-for-tat killings between Catholic nationalists who want the province to unite with Ireland and pro-British Protestant unionists.
Commentators do not think a return to those times is likely, but the last time the Stormont parliament was suspended, in 2002, it took five years for the rival parties from the two communities to agree to sit down together again.
This time, trust between the two sides has been destroyed by evidence that a paramilitary group that was supposed to have disbanded more than a decade ago is still engaged in violence, even if it is not pursuing a political agenda.
Talks are due to reconvene on Monday, and Cameron's spokesman said it was hoped all the parties would attend.
Cameron himself said it was "unacceptable in any part of our country to have active paramilitary groups", but still rejected calls from Robinson to suspend the province's political institutions and return its 1.8 million people to direct rule from London.
Robinson for his part avoided automatically triggering an election by naming an acting first minister in the shape of Arlene Foster, the only minister from his Democratic Unionist Party (DUP) who did not step down on Thursday.
She can hold the interim position for up to six weeks and Robinson said that should be enough time to complete talks, although he said his party had not yet to determine whether the terms were right to return to the negotiating table and avoid an early election, which would otherwise be due in May.
"I'm hoping that we can get the right basis upon which talks can take place. If we can then I think three, four, five weeks should be more than suffcient for us to deal with all of the necessary issues," Robinson told BBC Radio Ulster.
MURDER IN BELFAST
The crisis erupted when police said they suspected the murder of ex-IRA member Kevin McGuigan in Belfast on Aug. 12 might have involved some members of the IRA.
They detained a senior member of Sinn Fein, the former political wing of the IRA that is now in government, in connection with the killing, but later released him without charge.
Both the police and London's Northern Ireland secretary, Theresa Villiers, said the IRA still existed but was not involved in terrorism.
However, Sinn Fein President Gerry Adams, who has always denied having been a member of the IRA, said the group no longer existed, and that his party would not let the issue be a precondition of talks.
Sinn Fein's deputy first minister, Martin McGuinness, said any political vacuum would be exploited by violent elements.
But the chances of any breakthrough appeared slim. The leader of the smaller Ulster Unionist Party, Mike Nesbitt, said the main parties "deeply, deeply" disliked and distrusted each other.
On the streets of Belfast, there were fears that a lengthy impasse could see a return to the city's dark days of violence.
"People are absolutely sick and tired of it," said Neils William, a 60-year-old Belfast taxi driver.
"Essentially they are all the same as before. They don't fight about it, and that's important, but the anger is still in their hearts and minds.‎ You have two sides who cannot work together."
Robert Shields, 71, is a part-time guide showing tourists around the walls up to 12 metres high, often topped with spikes or barbed wire, that still divide the two communities.
"Things don't look good right now. We were going good there for a long time, we had visitors coming back, we had money coming in," he said.
"The people from the two roads here, the (Catholic) Falls and the (Protestant) Shankill road, they're tolerating each other at the minute, but if this escalates, we could go back years and years."
(Additional reporting by Michael Holden in London; editing by Guy Faulconbridge and Ralph Boulton)