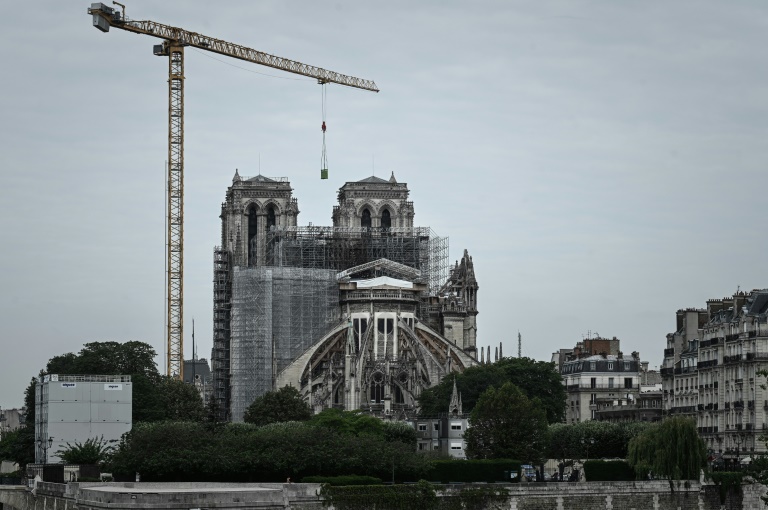 Workers at Notre-Dame cathedral in Paris on Monday began the delicate task of removing tons of metal scaffolding that melted together during the fire that destroyed the monument’s roof and spire last year, one of the riskiest operations in the rebuilding effort so far.

Around 40,000 tubes were fused into a tangled mass in the intense heat of the blaze, and must be removed without further damaging the limestone walls supporting the gothic vault.

Half of the metal remains suspended some 40 meters (130 feet) above the church’s floor.

“When all this is taken care of, we’ll be extremely relieved because the cathedral will have been saved,” said Christophe Rousselot, director general of the Fondation Notre-Dame, the charity that is overseeing the collection of donations to the cathedral.

“Pieces of the scaffolding could fall and weaken parts of the walls,” he said, describing the work as “very complicated, with a sizable degree of risk.”

A telescopic lift carried workers into the middle of the structure for a last evaluation, and a towering crane installed at the site brought up equipment.

Later this week, workers will be suspended by ropes to start sawing apart the scaffolding, an operation expected to last through the summer, Rousselot said.

The scaffolding had been installed for a renovation of the spire that was being carried out when the fire erupted on the evening of April 15, 2019.

Millions of people around the world watched as the fire tore through the church’s roof, causing its steeple to collapse and sending billowing fumes containing toxic molten lead into the air.

Firefighters worked throughout the night to keep Notre-Dame from collapsing completely, though officials have said the structure remains at risk.

Workers first had to install a new lattice of scaffolding to encompass the roughly 40 tonnes (88,000 pounds) of molten metal and stabilize it as well as the fire-scarred walls of the 13th-century masterpiece.

Two teams of five will take turns cutting away the tubes one by one while hanging from rope harnesses.

Once the tubes are cleared a more durable temporary roof can be installed to protect the cathedral’s priceless artworks from rain, allowing actual restoration work to begin, though officials have said that might not start until next year.

Marking the first anniversary of the disaster in April, President Emmanuel Macron reiterated his goal of restoring Notre-Dame to its former glory by 2024.

But the renovation has been slowed by a series of delays, including the recent halt during the coronavirus lockdown that kept the 60 to 70 workers at home.

Work had already been stopped last year to remove the lead particles that settled on the site when the metal panelling in the roof melted.

Heavy concentrations of the metal settled on the square in front of the cathedral and on nearby streets that proved particularly difficult to remove, sparking fears that residents could be exposed to poisoning.

Several schools were closed for weeks as workers decontaminated classrooms and playgrounds, and the square in front was reopened to visitors only last month.

Countless other cleaning and restoration operations await, and the project’s chief architect Philippe Villeneuve has warned that new challenges could arise as the work progresses.

Officials must also still decide on whether to rebuild the cathedral exactly as it was, or incorporate modern materials.

Macron has said he is open to adding a “contemporary” touch to the spire, for example, and plans to invite architects worldwide to make proposals.

The fire prompted an outpouring of funds from donors worldwide, with more than 900 million euros (nearly one billion dollars) given or pledged by some 340,000 companies and individuals.

Notre Dame rector says fragile cathedral might not be saved