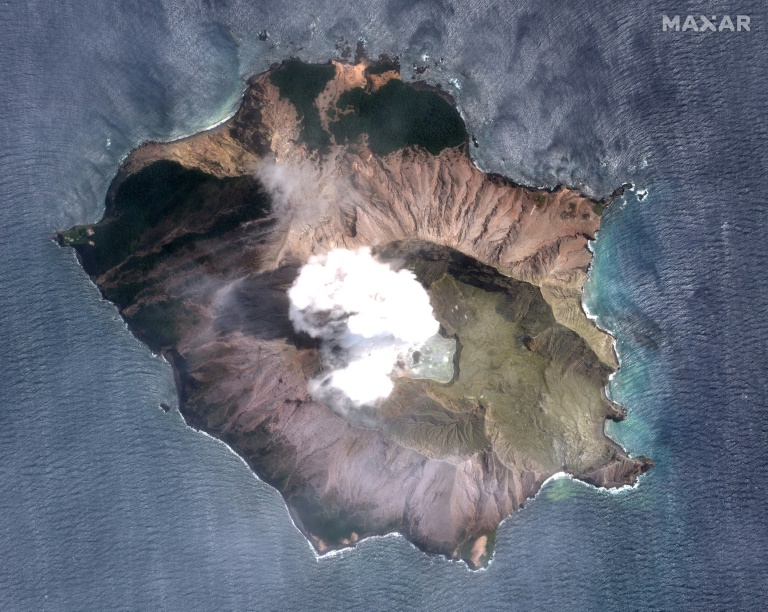 Teams will move in “shortly after first light” on Friday, deputy police commissioner Mike Clement said, despite volcanologists warning that the chances of another significant eruption in the next 24 hours had risen to 50-60 percent.

“They will go on to the island and they will make every effort to recover all of the bodies” and transport them to military frigate HMNZS Wellington anchored off the coast, he said.

With the help of drone flights and helicopter pilots who were near the volcano immediately after the eruption, authorities have located six of the eight bodies on the island.

Recovering the six will be a priority, Clement said.

A geologist will be on hand sifting data in realtime to determine whether another eruption is imminent and whether the mission needs to be aborted.

“The risk is not gone,” Clement said. “Of course I’m going to worry tonight.”

“People are putting themselves on the front-line to do the right thing… our thoughts and our prayers and our love will be with them.”

The number of people believed to have died in Monday’s disaster now stands at 16.

That includes the eight people thought to be still on White Island – among them New Zealand tour guide Hayden Marshall-Inman.

His brother Mark Inman has epitomized families’ frustrations with stalled recovery efforts, putting the delay down to “red tape, bureaucracy” and failed leadership, while offering to go to the island himself.

A visibly anguished Prime Minister Jacinda Ardern earlier expressed empathy with the families but insisted “everyone is desperate to get those victims back”.

“We are all in exactly the same place and wanting to make sure that as soon as possible, as soon as we can, that recovery operation begins.”

After days of caution and focusing on the risk to rescuers, police have indicated they now see the recovery as a race against time, and the longer the operation is delayed, the less chance there is of returning identifiable remains to grieving families.

On White Island poisonous gases are still billowing from the volcanic vent and the island is blanketed in a thick layer of acidic ash.

While officials weighed how to recover bodies of the dead, some 29 people ⁠— mostly tourists who had been on a day trip to see the natural wonder ⁠—  are still being treated in hospitals across New Zealand and Australia, many in a critical condition suffering severe burns.

The survivors’ injuries were so severe New Zealand doctors initially estimated they would need to import 1.2 million square centimetres (185,000 square inches) of skin for grafts — although that was likely to be revised down as victims were moved overseas to ease the strain on hospitals.

Sydney high school Knox Grammar named the latest fatalities as brothers Matthew and Berend Hollander, saying their deaths were a “devastating loss for our community”.

It said the boys’ parents, Barbara and Martin Hollander, were still unaccounted for.

A total of 47 day-trippers and guides were on the island when the blast occurred, hailing from Australia, the United States, Britain, China, Germany, Malaysia and New Zealand.

Australian Prime Minister Scott Morrison said one Australian was confirmed dead and a further 10 were missing and presumed to have perished.

Canberra has sent three military aircraft with specialist medical crews to repatriate some of the survivors, with at least 12 Australians expected to be flown to burns units in the country.

Malaysia previously said one of its citizens had died in the tragedy, but a foreign ministry official told AFP late Thursday the victim had in fact survived and was in a critical condition.

“The victim will be flown to Australia for further treatment,” the official said.

British and US officials said their citizens were among those hurt.

A coronial process has begun to identify the eight confirmed dead but police said it could “take some time”.