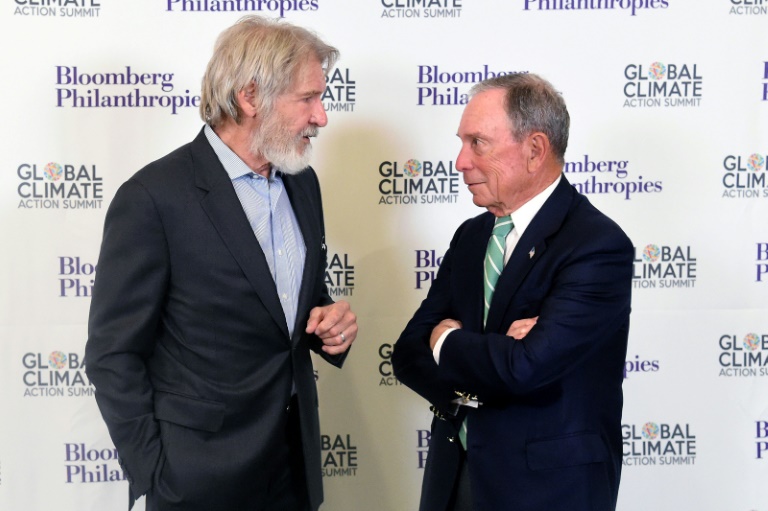 Mayors, governors, entrepreneurs, CEOs, investors and celebrities delivered a double-edged message Friday at the close of a climate summit in San Francisco: global warming is making the planet unliveable — but we know how to fix it.

“We are using the sky as an open sewer, it’s insane,” former US vice president Al Gore told the conference, noting that humanity belches 110 million tons of heat-trapping pollution into the atmosphere every day.

“Will we change? That’s what the Global Climate Action Summit is all about.”

Over three days, thousands of delegates from the private and public sectors showcased policies and innovations aimed at reducing that flow of greenhouse gases.

Cities are converting to all-electric vehicle fleets and setting deadlines for banishing gas-guzzling cars from their roads; companies have vowed to operate only with renewable energy, including a few smokestack multinationals in the developing world.

Investors managing fortunes said they were purging coal, oil and gas from their portfolios; young entrepreneurs showed off energy-efficiency apps and inventions.

Provincial and state governors in tropical countries vowed to empower indigenous peoples who have been managing forests sustainably since before “sustainable” was even a word.

But all these efforts may be in vain, the delegates warned, if national governments fail to do their part.

“Now is the time for all leaders to step up and take bold action,” they said in an appeal framed as a Call to Action.

“We call on the national governments of the world to step up ambition now… and chart a clear path to your zero-carbon future.”

“We have enough critical mass in the private sector now to help spur that political process,” said Paul Polman, CEO or Unilever, one of the world’s largest consumer goods companies.

The 196-nation Paris Agreement, inked in 2015, enjoins nations to cap global warming this century at “well below” two degrees Celsius (3.6 degrees Fahrenheit), and to strive for a ceiling of 1.5 C if possible.

With only one degree Celsius of warming so far, Earth has seen a crescendo of deadly heatwaves, droughts, floods and superstorms engorged by rising seas.

But UN talks to implement the treaty, which goes into effect in 2020, have stalled over disagreements on money to help poor countries green their economies and brace for unavoidable climate impacts.

More urgent still is the so-called “ambition gap” between voluntary national commitments to curb carbon pollution, and what is needed to keep global temperature rises under 2 C.

Even if all nations honor current pledges — many of which depend on climate finance that does not yet exist — the world will heat up by an unbearable 3.5 C, scientists have calculated.

A climate summit convened by UN Secretary-General Antonio Guterres next fall “is what is going to determine whether we can save the Paris Agreement or not,” said David Paul, Environment Minister for the Marshall Islands.

The transition to a greener global economy has been hampered by US President Donald Trump, who opted out of the Paris pact months after taking office, saying it would pose a “burden” on the US economy.

Trump has also taken a sledge hammer to the climate policies of his predecessor, Barack Obama, relaxing pollution rules for coal-fired power plants and rolling back car-mileage standards.

“Withdrawing American leadership from an issue that is life or death is one of the single greatest acts of irresponsibility of a president anywhere, anytime,” former US Secretary of State and presidential candidate John Kerry told the plenary, to thunderous applause.

But the American people are “way smarter,” he added, pointing to the conference and climate change policies in dozens of states across the country.

“The zero-carbon economy is the growth story of the 21st century,” economist Nicholas Stern, Grantham Research Institute on Climate Change and the Environment at the London School of Economics, told AFP.

“There is no long-run high carbon growth story.”

The final verdict was delivered by Hollywood veteran Harrison Ford.

“So let’s turn off our phones, let’s roll up our sleeves, and let’s kick this monster’s ass.”

US to miss Paris climate pact target by a third

US accused of blocking UN climate talks amid protests