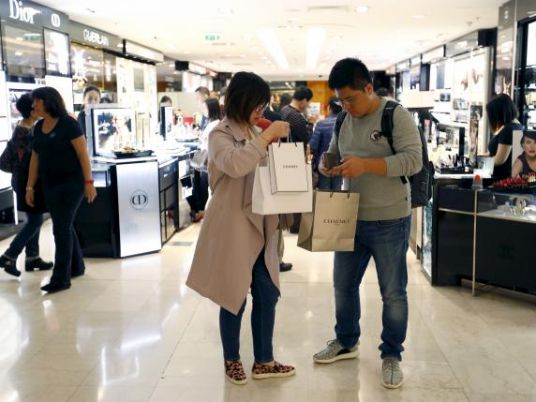 Chinese luxury consumers are spending more on ready-to-wear and new labels, a notable shift in the behavior and tastes of the world's top spenders, a Reuters survey of retailers in the United States, Asia and Europe showed.
Chinese consumers are increasingly traveling alone, rather than in groups, and are more likely to buy for themselves or friends than for their boss, or the spouse of a government official. Just over two years ago, around a third of Chinese luxury purchases centered on gifts-for-favors including Rolex watches, Hennessy cognac and Gucci handbags.
Beijing's clamp-down on corruption and conspicuous spending since 2012 has squashed that market and prompted more Chinese to buy luxury goods abroad to save money and shop anonymously.
Analysts estimate more than two thirds of luxury purchases by Chinese buyers is done overseas, mainly in shopping hotspots such as Paris, Milan, London, New York and Tokyo, which can offer savings of more than 50 percent, compared with China prices thanks to foreign exchange rates, tax refunds and other discounts.
"While they used to purchase luxury products to show off their wealth, now they want to show their good taste, their personal choice of the best the luxury industry can offer," said Daniele Zito, from consultancy Bain & Co, based in Italy.
"This is increasingly supporting more niche and less distributed brands."
More than a dozen luxury retailers surveyed in Asia, Europe and the United States said they had not seen any impact from China's economic woes this year. Such effects could feed through in coming months, analysts said.
Luxury spending by Chinese abroad is rising and their changing tastes have implications for many up-and-coming brands, the survey suggested.
Chinese luxury buyers barely existed a decade ago but today represent more than 30 percent of the global personal luxury goods market, expected to reach around US$259 billion this year.
And since only about 5 percent of Chinese have passports, many more will travel, predicts Erwan Rambourg, an HSBC luxury goods analyst and author of “The Bling Dynasty: why the reign of the Chinese luxury shoppers has only just begun”.
Many Chinese shoppers are on their second or third trip, sometimes to the same place, which means they are more likely to be traveling alone and have more time to try out new styles and brands.
"They have much more time to spend money and look after themselves when they are alone," said Bertrand Legal, a personal shopper at Paris' Printemps, a department store with more than 2,000 high-spending customers on its rolodex. Close to 70 percent are Chinese.
Rising stars
Valentino, Dolce & Gabbana, Givenchy, Chloe and Miu Miu, are among the brands drawing more interest from Chinese customers, the survey showed.
Rising stars in ready-to-wear are Victoria Beckham and Alexander McQueen, as well as Korean designers such as Mojo.s.phine and Ozoc.
"Everyone I talk to in China is always asking for new brands," said Sage Brennan, a consultant for brands in the United States.
Despite China's woes, Chinese luxury spending abroad had shown no sign of abating. Tax-refund firm Global Blue said global spending by Chinese tourists rose 65.6 percent in August and 73 percent in July year-on-year.
Sales have fallen sharply in mainland China though, hitting brands such as Prada, LVMH's Louis Vuitton and Kering's Gucci, which invested heavily to open boutiques there.
Political unrest in Hong Kong in 2014 scared off mainland Chinese tourists, hitting sales at luxury groups with high exposure to the city, such as Cartier and Montblanc owner Richemont.
"Companies have to accept the reality that the cycle of the past 10-12 years is over," said Peter Cheung, a fashion consultant in Hong Kong who works with luxury brands.
Overall, the global luxury industry's sales growth has slowed to 5 percent in 2014 from 7 percent in 2013 and over 10 percent in previous years.
"Knee-length skirt and a hat"
Personal shoppers in department stores such as Harrods and Selfridges in London, and Printemps in Paris said Chinese tourists are keen on making shopping a cultural experience and attending social events such as fashion shows and horse races.
"It is about getting them to discover the British lifestyle, dressing codes and etiquette," said Sabrina Cannon, head of personal shopping at Harrods, where Chinese are the top spenders.
She helps create entire looks for events such as Britain's Ascot horse race, for which one should have "shoulders covered, a knee-length skirt and a hat."
Chinese customers from big cities such as Shanghai and Beijing have started to mix brands as they hone their style, while those from second- or third-tier cities opt for the safe "total look", dressing in one brand from head to toe, personal shopping assistants said.
The typical Chinese luxury buyer is aged 25-40 and newly wealthy, many having made their money from Internet-based businesses, said Eva Chang of Shanghai luxury department store l'Avenue.
"This is a very savvy, fast-learning, ultra-connected group, who buy things for themselves or on behalf of friends," she said. Buying for others is around 20 percent of luxury purchases abroad, analysts estimate.
While Chanel is the preferred brand, "key opinion leaders", like celebrities, are helping new names gain ground.
"They will go for smaller brands, but only if they have heard about them before," says James Servini, head of personal shopping at Selfridges in London.
Favorite watch brands include Patek Philippe, Piaget, Vacheron Constantin and Rolex. Chinese shoppers prefer to buy diamonds than watches from Cartier, while popular jewelry products include Bulgari's Serpenti bracelets and Van Cleef's Alhambra pendants, the survey showed.
"After all these years of repression, I think they are expressing a new-found sense of freedom through their luxury purchases," said Priscille de Benoist, head of personal shopping at Printemps.