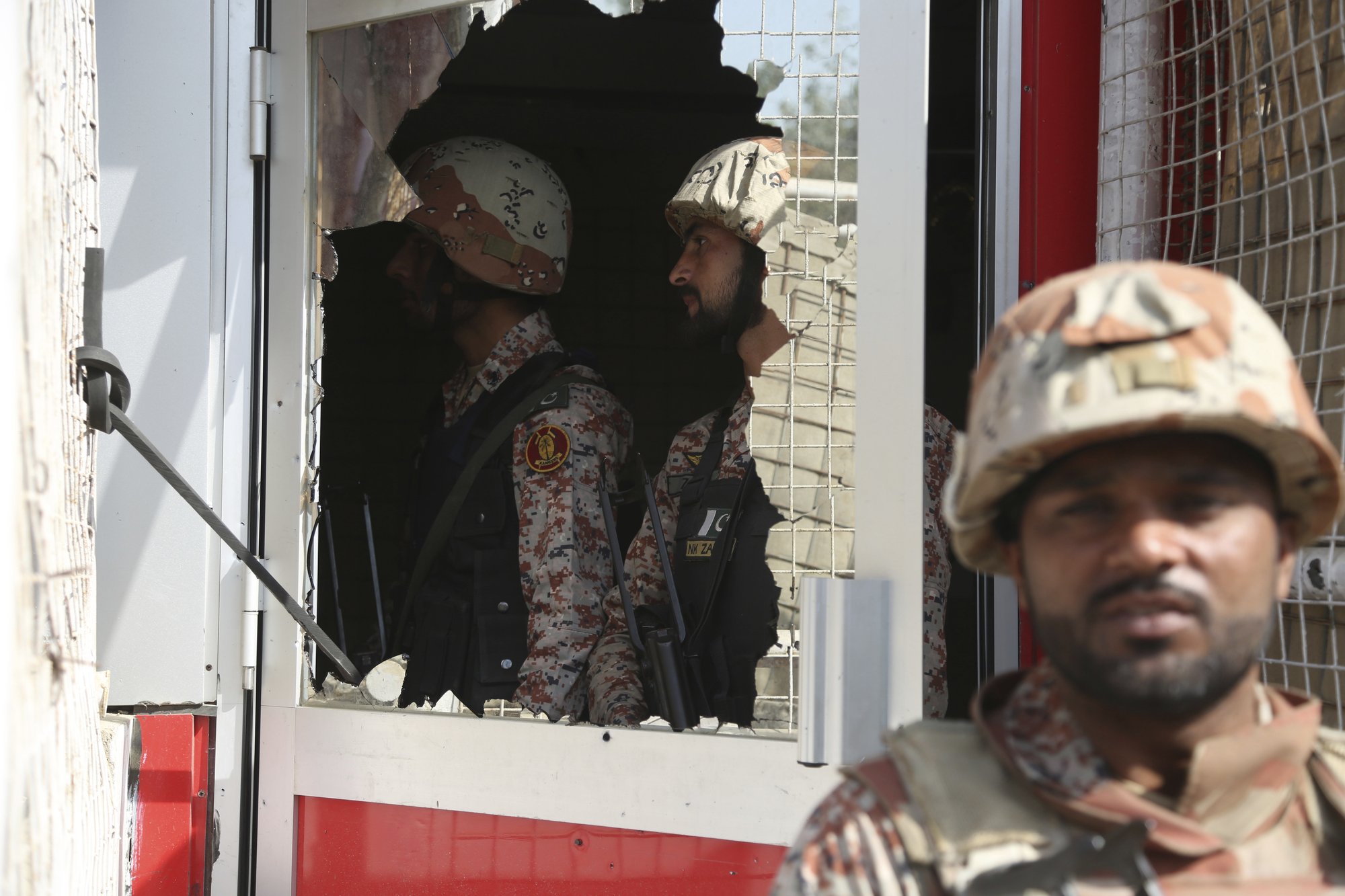 The brazen assault, claimed by a militant group from the southwestern province of Baluchistan, reflected the separatists’ attempt to strike at the heart of Pakistan’s close ties with major ally China, which has invested heavily into road and transportation projects in the country, including in Baluchistan.

All the Chinese diplomats and staff at the consulate were safe and were not harmed during the attack or the shootout, senior police official Ameer Ahmad Sheikh said.

Prime Minister Imran Khan condemned the attack, describing it as part of a conspiracy against Pakistan and China’s economic and strategic cooperation. Khan lauded the Karachi police and the paramilitary rangers, saying they showed exceptional courage in defending the consulate and that the “nation salutes the martyrs.”

He ordered an investigation and vowed that such incidents would never be able to undermine relations with China, which are “mightier than the Himalayas and deeper than the Arabian Sea.”

The attackers stormed the consulate shortly after 9 a.m., during business hours. They first opened fire at consulate guards and hurled grenades, then managed to breach the main gate and enter the building, said Mohammad Ashfaq, a local police chief.

Pakistani security forces quickly surrounded the area. Local TV broadcast images showing smoke rising from the building, which also serves as the residence of Chinese diplomats and other staff.

Multiple blasts were heard soon afterward but Sheikh could not say what they were. The shootout lasted for about an hour.

“Because of a quick response of the guards and police, the terrorists could not” reach the diplomats, Sheikh said after the fighting ended. “We have completed the operation, and a search is still underway to trace and capture all suspects.”

He added that one of the attackers was wearing a suicide vest and that authorities would try and identify the assailants through fingerprints.

Dr Seemi Jamali, a spokeswoman at the Jinnah Hospital, said the bodies of two police officers were brought to the hospital morgue while one of the consulate guards who was wounded, is under treatment.

Elsewhere in Pakistan on Friday, a powerful bomb at an open-air food market in the Orakzai region of the Khyber Pukhtunkhwa province, which borders Afghanistan, killed 12 people and wounded at least 50, said police official Tahir Ali.

Most of the victims in the attack in the town of Klaya were minority Shiite Muslims. No one immediately claimed responsibility for the bombing. Orakzai has been the scene of several militant attacks in recent years, mostly by Pakistani Sunni militants.

In its claim of responsibility for the Karachi consulate attack, the Baluch Liberation Army, said it was fighting “Chinese occupation” and released photos of the three attackers.

This was the second attack this year by Baluch separatists in Pakistan. Karachi, the capital of Sindh province, which borders Baluchistan, has a presence of several militant groups, including Baluch separatists.

In August, a suicide bomber rammed into a bus ferrying Chinese workers to the Saindak mining project in southwestern Baluchistan, wounding five workers. The project is controlled by the Chinese state-owned Metallurgical Corporation of China. And in May , gunmen opened fire on two Chinese nationals in Karachi, killing one and wounding the other.

Friday’s attack was a brazen uptick in the level of violence perpetrated by the Baluch separatist, said Amir Rana, executive director of the independent Pakistan Institute for Peace Studies.

So far this year, the Baluch Liberation Army has claimed responsibility for 12 attacks against security personnel guarding projects linked to the so-called Chinese Pakistan Economic Corridor as well as to the infrastructure.

In a letter dated Aug. 15, the group released a letter warning China against the “exploitation of Baluchistan’s mineral wealth and occupation of Baloch territory.” The letter was addressed to China’s ambassador to Pakistan.

But, Rana said, both China and Pakistan have calculated the security risks, which include the threats from the Baluch separatist.

“I don’t see that this will have any impact on the Chinese projects in Pakistan. These threats were already on Pakistan and China’s threat radar,” he said.

China is a longtime ally and has invested heavily in transport projects in Pakistan. The two countries have strengthened ties in recent years and China is currently building a network of roads and power plants under a project known as the China-Pakistan Economic Corridor, or CPEC.

The Baluchistan separatists have for years fought a low level insurgency in Pakistan, demanding a greater share of the province’s wealth and natural resources.

In Pakistani village, home is where the cave is

Taliban hold talks with US envoy in Qatar