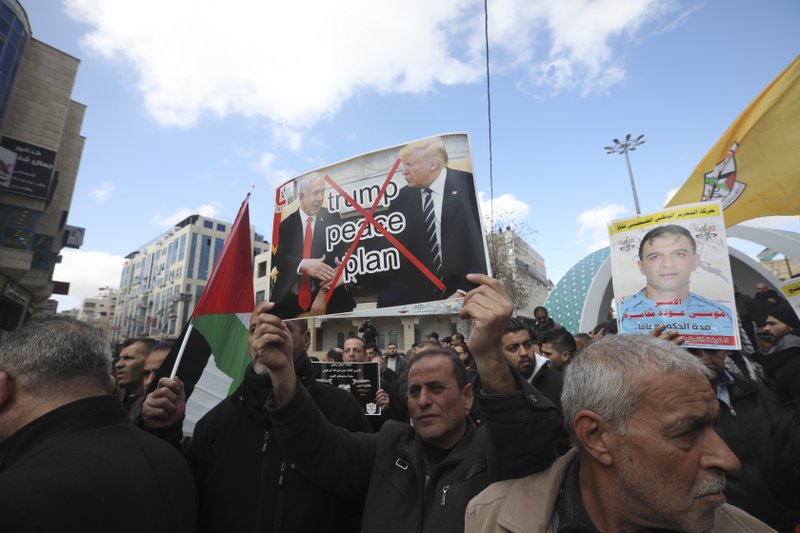 UNITED NATIONS (AP) — Palestinian President Mahmoud Abbas will reiterate his rejection of the Trump administration’s Mideast plan in an address to the U.N. Security Council Tuesday, but members will not be voting on a draft resolution opposing the U.S. proposal.

President Donald Trump unveiled the U.S. initiative for ending the Israeli-Palestinian conflict on Jan. 28. It envisions a disjointed Palestinian state that turns over key parts of the West Bank to Israel, siding with Israel on key contentious issues including borders and the status of Jerusalem and Jewish settlements.

Senior Palestinian official Saeb Erekat denied reports that the draft resolution was pulled because of a lack of support, saying in a statement that the “rumor” the Palestinians withdrew the resolution is “not true and totally baseless.”

He said the draft resolution, which initially said the U.S. plan undermined the Palestinian peoples’ aspirations for independence, is still being discussed and will be put to a vote once those discussions conclude with “a formula that represents our positions.”

The original draft resolution, co-sponsored by Tunisia and Indonesia and backed by the Palestinians, also said the U.S. plan violates international law and Security Council demands for a two-state solution based on borders before the 1967 Mideast war. It would have expressed the council’s determination “to examine practical ways and means to secure the full implementation of its relevant resolutions, including enforcement measures under Chapter 7 of the (U.N.) Charter,” which can be by military or non-military means.

The resolution had been expected to be put to a vote on Tuesday when Abbas addressed the council. But diplomats said many of its provisions were not acceptable to European members of the council, who support a two-state solution based on pre-1967 borders, and other council members.

After lengthy negotiations and revised drafts through the weekend, and the circulation of a drastically amended text by the United States, the Palestinians decided against putting any draft in “blue” — a final form for a vote, the diplomats said, speaking on condition of anonymity because the discussions were private.

Erekat said since the resolution hasn’t been put in “blue,” it cannot be said that it was pulled.

The proposed U.S. draft, obtained by The Associated Press, strips a reaffirmation of previous U.N. resolutions and references to pre-1967 borders as well as a condemnation of “all measures aimed at altering the demographic composition, character and status of the Palestinian territory occupied since 1967, including east Jerusalem, in violation of international humanitarian law and relevant resolutions.” A previous draft eliminated the reference to Chapter 7.

The Palestinians seek all of the West Bank and east Jerusalem — areas captured by Israel in the 1967 Mideast war — for an independent state and the removal of many of the more than 700,000 Israeli settlers from these areas.

But under terms of the “peace vision” that Trump’s son-in-law and senior adviser Jared Kushner worked on for nearly three years, all Israeli settlers would remain in place, and Israel would retain sovereignty over all of its settlements as well as the strategic Jordan Valley.

Israel’s U.N. Ambassador Danny Danon called the original draft “an anti-U.S. resolution” and said if it’s modified in “a constructive way, maybe the council will support it.”

He said Abbas should come to the Security Council on Tuesday “to present his vision for the future,” instead of to reject the U.S. plan.

“We look at it as a starting point for negotiations,” he said of Trump’s plan, adding that Abbas should come to Jerusalem to address the Israeli people and “deliver a message of hope, instead of a massage of hate.”

After Abbas addresses the Security Council on Tuesday, he will appear at a press conference with former Israeli Prime Minister Ehud Olmert, an opponent of the U.S. plan who was forced to resign a decade ago ahead of a corruption indictment that later sent him to prison for 16 months.

Danon said he thinks “it’s unfortunate … and shameful that he will be standing with president Abbas, especially this week when we saw attacks on Israeli civilians and soldiers” and a resolution “trying to condemn the U.S., our strongest ally. And I think from a former prime minister we should expect more.”

Last week, Kushner, the architect of the U.S. plan, called Olmert’s expected appearance with Abbas “almost pathetic,” accusing him of “trying to grab a headline when you’re irrelevant.”

He added: “It comes from a lot of jealousy that they couldn’t get it done themselves.”

Image: Palestinians protest the Mideast plan announced by the U.S. President Donald Trump, in Hebron, West Bank, Thursday, Jan. 30, 2020. Trump’s Mideast plan would create a disjointed Palestinian state with a capital on the outskirts of east Jerusalem, beyond the separation barrier built by Israel. The rest of the Jerusalem, including the Old City, would remain Israel’s capital. (AP Photo/Mahmoud Illean)