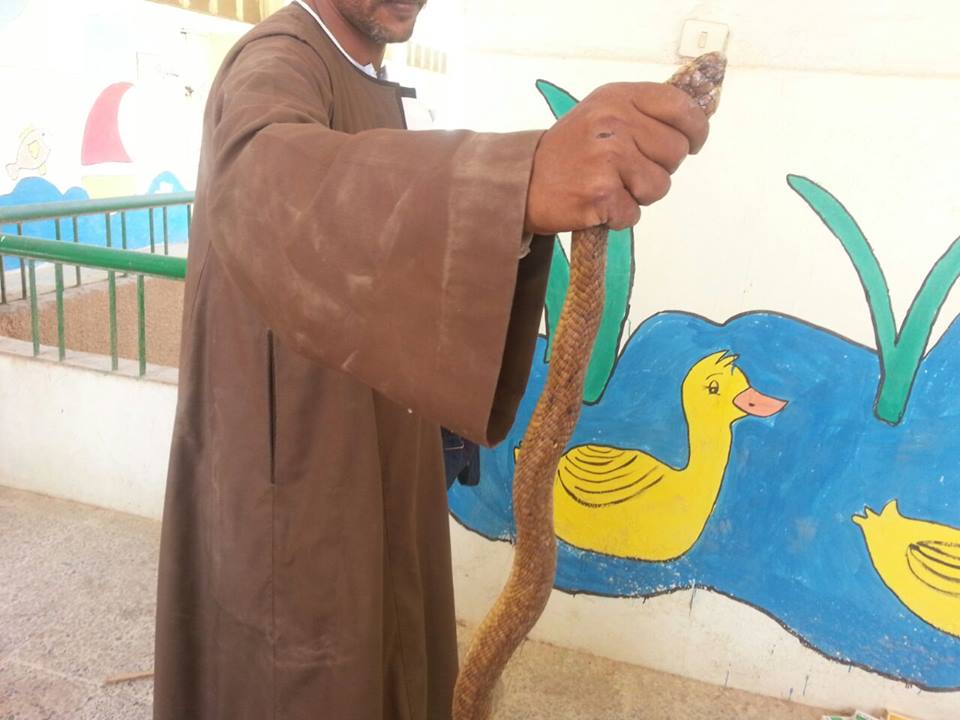 Last April, primary-level students at an Egyptian state school were panic-stricken when they saw a snake crawling into their classroom. The teacher reacted quickly, stomping on the animal's head and killing it.

Surpising though such an enounter may seem, this was not the first such incident in Ahmed Shawky Experimental Language School.

The school is located in the 15th of May suburb in the east of Helwan, close to a hilly area where reptiles are found in large numbers. Aside from the abundance of snakes, parents complain that the buildings are delapidated, with numerous cracks in the walls, while the bathrooms are unclean and the courtyard a mess of rubble.

During the spring semester of 2016, students discovered numerous poisonous snakes swirling around in the school's courtyards. They were especially numerous in the small garden of the kindergarten, forcing the school adminstration to call on parents to keep their younger kids at home until the problem had been fixed.

A snake catcher holds up a cobra discovered in the school

“We were shocked when we discovered this last semester, " said Rasha Khamees, one of the parents.

"My daughter’s friend told us about a snake that was found in the kindergarten’s garden, and the principle asked the school doorman to kill and hide it without drawing anyone's attention. Then we realized that this was not the first time, and that such incidents take place from time to time."

Khamees has two children in the school, one in the kindergarten and the other in the fifth primary level.

A snake-catcher places another snake in his bag

While many parents hoped the snake in the garden was an isolated incident, they were set straight when another creature appeared inside a classroom for primary-level children.

The story spread quickly on social media, along with photographs, soon catching the attention of media outlets. As they watched the crisis grow, the school administration decided to transfer all the students to another school for the end-of-year exams in May. While the students were away, the school administrators said they would look for a solution to the snake problem.

The transfer operation was not easy, bearing in mind that students at all levels — from kindergarten up to secondary school — would have to move at the same time. "It was not easy," said Khamees, "and we were worried about sending our kids to another school."

In an effort to clear up the problem, the school brought in a snake-catcher who caught a long female cobra, while parents and teachers looked on in amazement.

Having found the mother and many babies, the snake-catcher said there must be an adult male hiding nearby. He asked the school to put out eggs to attract the male, who would be tempted by the free meal.

After a few days, the eggs began to disappear, suggesting the male was in the area. Finally, he was caught, along with a number of youngsters.

The snake-catcher hunts for a snake in front of students, teachers and parents

However, the parents and staff at the school were still uneasy, fearing that there might be other snakes around that would emerge in time. They said that the dilapidated condition of the school was part of the problem, since the rubble, cracks and numerous holes provided the perfect living quarters for reptiles.

The school principal, along with the local education authority, promised a program of repairs and paving, blocking up the various entrances to snake burrows.

The improvements were due to be conducted over the summer holidays, but parents say that the promised building work has not been completed.

Another snake captured on school premises

According to Khamees, both the school and the education authority promised that if the work was not finished by the start of the new school year, places would be found for the children at other schools. However, she says this has not happened, leaving the parents unsure of where their children will study this year.

“It’s very hard now to find a place in another public school nearby, because all of them said that they are full and there are no places available for our kids,” Khamees said.

"Since we are in Egypt, nothing has happened, and it’s only one month until the new semester starts. We don’t know what to do, how we'll get our kids into a school,” Khamees said.

After desperate attempts to negotiate with the school and the education authority, the parents sent emails to the Ministry of Education, attaching a complaint about the snakes.

However, apart from a brief reply asking for confirmation of the name of the school, they never got an official response from the ministry.

“We are trying hard to meet someone in charge in the Ministry of Education, but it’s difficult. However, we haven't given up. We have filed a complaint and a lawyer is undertaking the case now,” Khamees said.

A complaint about the snakes submitted to the Education Ministry

One source of assistance has presented itself, however.

A group of officials from the veterinary medicine department at the Agriculture Ministry inspected the school, writing a report confirming the problem with snakes and saying they threatening the lives of the students.

Not long after, a group of workers from the Agriculture Ministry arrived at the school. They plugged up the burrows of the snakes, distributed poisonous eggs and sprayed artemisia to repel the animals.

Following these anti-snake precautions, parents say the head teacher informed them that the school would be open for business as usual from September.

So far, though, many parents remain unconvinced, fearing that the solution may be temporary. However, with no alternatives on offer, they — or rather their children — may have to take their chances.

Some parents say the bathrooms in the school are unclean, attracting the snakes

A dirty and messy yard at the shool, where snakes have been breeding