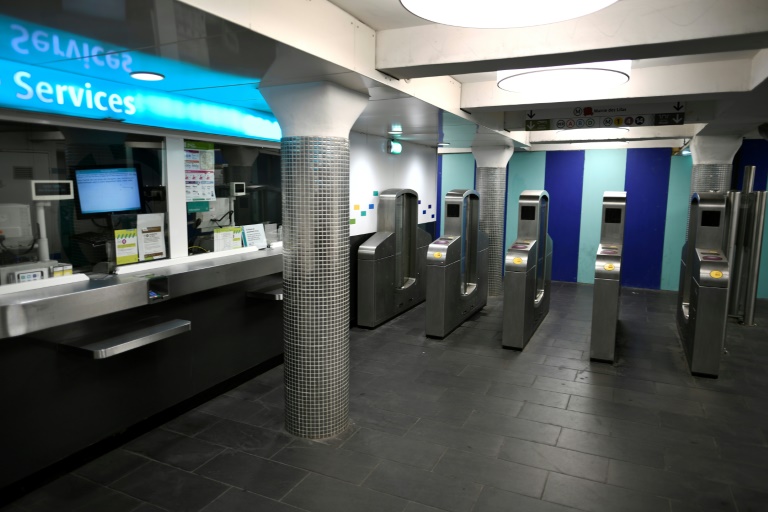 Paris metro and other public transport workers walked off the job Friday over a planned pension overhaul, sparking huge traffic jams and forcing many people to stay home for the one-day strike action.

Ten of the city’s 16 metro lines were shut down completely, while service on most others was “extremely disrupted,” the RATP transit operator said.

Massive crowds waited on the platforms of the few lines still working and officials counted some 200 kilometres (125 miles) of traffic backups during the morning rush hour, double normal levels.

The city’s burgeoning cycle lane system was seeing a surge in traffic as people pulled out bikes to get to work.

Two of the three main suburban lines traversing the city were also severely disrupted, as were most bus and tram services.

Die Sokhanadu, 25, was stuck at a station on line 12, trying to get to his job working on the restoration of the Notre-Dame cathedral in the heart of the city.

“If the metro doesn’t start running, I’m going to have to head home,” he told AFP.

Others worried about their evening commutes, with the RATP warning that only lines 1 and 14 — the only two which function autonomously, without drivers — would be operating after 8:00 pm (1800 GMT).

The RATP warned Thursday that commuters should try to find travel alternatives and said it was financing free 30-minute rides on the Cityscoot network of electric mopeds.

US ride-hailing giant Uber is also hoping to seize the moment with two free 15-minute rides offered on the Jump electric bikes and scooters it has deployed in Paris.

‘Shot across the bow’

The strike is the first major action against President Emmanuel Macron’s plan to implement a “universal” pension system that would do away with dozens of separate schemes for different professions.

Metro workers and other critics say it would force them to work longer by removing their long-held rights to early retirement, secured decades ago to compensate for arduous work often involving long hours underground.

France’s state auditor, the Cour des Comptes, says the average retirement age for RATP workers in 2017 was 55.7, compared with 63 years for most French workers.

The three main RATP labour unions have called the strike “a shot across the bow” against the overhaul, the latest element in Macron’s push to bolster France’s economy and finances with a wide-ranging reform plan.

It is shaping up to be the biggest metro strike since 2007, when former president Nicolas Sarkozy pushed through a pension reform that delayed the retirement age for most public workers.

During his 2017 presidential campaign, Macron pledged not to touch the current earliest legal retirement age of 62 for most workers.

But Jean-Paul Delevoye, who is leading the reform project, has suggested a points system that would effectively wipe out the more advantageous pensions for a wide range of professions, including those for sailors, notaries and even Paris Opera workers.

More controversially, Delevoye has also proposed making a full pension available only from 64 — people who retire earlier would have to accept a lower pension: five percent less for someone who stops working at 63, for example.

“We’re going to construct a truly universal system where every euro paid in will provide the same rights for everyone, whether a labourer, a shop owner, a researcher, a farmer, a civil servant, a doctor or an entrepreneur,” Prime Minister Edouard Philippe said in a speech Thursday.

Consultations are currently being held with labour unions and the government wants parliament to vote on the project early next year.

The government is likely to face further opposition to its plans in coming weeks, with lawyers, airline pilots and stewards, and medical workers already calling a strike for Monday.

Photo: Metro turnstiles were left open at the Les Halles station, normally a bustling commuter hub, during the Paris metro strike on Friday.

Paris, four other French cities ban use of pesticides