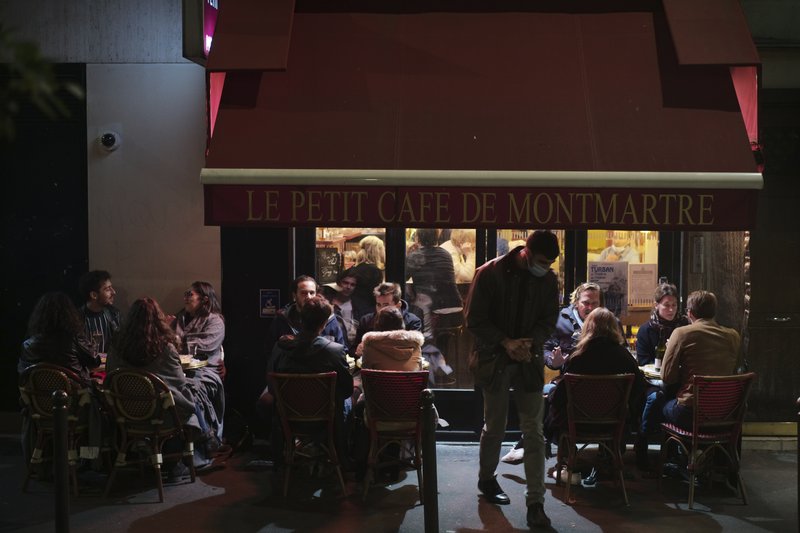 Paris police prefect Didier Lallement announced the new restrictions would apply at least for the next two weeks.

“We are continuously adapting to the reality of the virus. We are taking measures to slow down (its spread),” he said.

Starting on Tuesday, bars will be closed in Paris and its suburbs. Student parties and all other festive and family events in establishments open to the public will be banned.

Restaurants will remain open under strict conditions, to be detailed later on Monday. They are expected to include distance between each table, a limitation of the number of people and a request to register customers’ names and phone numbers.

Indoor sport facilities, including swimming pools, will only be open to children aged under 18. Gyms are already closed.

Cinemas, theaters and museums will remain open with strict sanitary rules, but fairs and professional shows won’t be allowed.

Authorities have maintained the limit of 1,000 spectators per day at big sports events, allowing the Roland-Garros tennis tournament to continue as planned this week.

The director of the Regional Health Authority, Aurelien Rousseau, said about 3,500 new cases of infection are confirmed on average each day in the Paris region, and 36 percent of ICU beds in the area are occupied by COVID-19 patients.

The alert has already been raised to the maximum level for 12 days in the southern city of Marseille and nearby Aix-en-Provence, as well as the French overseas territory of Guadeloupe, in the Caribbean.

Authorities ordered the shutdown of all public venues, including bars and restaurants in these areas, which prompted several demonstrations from angry business owners in Marseille.

On Monday, local authorities announced restaurants in Marseille and Aix-en-Provence would reopen on condition they respect the same restrictions as in Paris.

The country, one of the hardest hit in Europe, has reported 32,230 virus-related deaths since the beginning of the pandemic.

Image: FILE – In this Sept.26, 2020 file photo, people enjoy a drink in a cafe terrace in Paris. French authorities have placed the Paris region on maximum virus alert on Monday, banning festive gatherings and requiring all bars to close but allowing restaurants to remain open, as numbers of infections are rapidly increasing. (AP Photo/Lewis Joly, File)

German leaders consider how to slow rise in virus cases

It’s class time again across Europe, virus or no