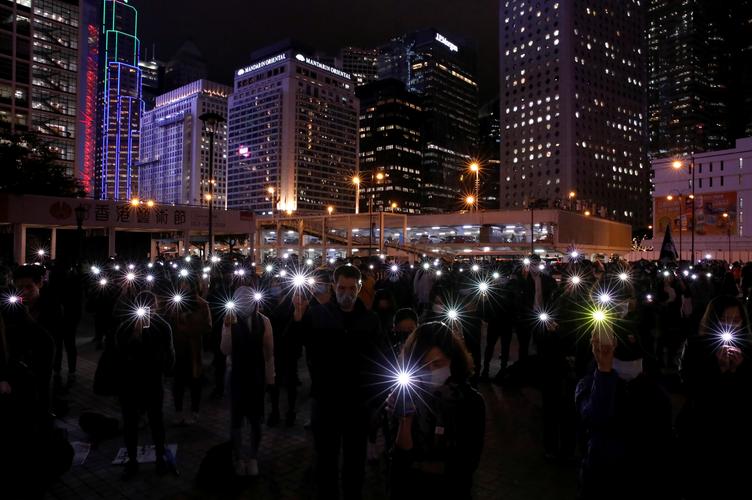 HONG KONG (Reuters) – Hong Kong pro-democracy protesters began staging New Year’s Eve rallies around the city on Tuesday, urging people not to give up the fight for democracy in 2020, as police prepared to deploy more than 6,000 officers according to local media.

“Liberate HK, Revolution of our time is my New Year wish,” said 30-year-old Calvin, who attended a lunchtime rally in the central business district.

Protesters were urged to wear masks at the “Don’t forget 2019 – Persist in 2020” rally, according to social media posts.

“As we have been protesting for such a long time, but the government still refuses to listen to us. If we don’t join the protest, we are in debt to our comrades who have already been jailed,” said Calvin.

“Let’s start 2020 with a new resolution, to restore order and harmony in society. So we can begin again, together,” said Lam in the three-minute long message.

Other protest events dubbed “Suck the Eve” and “Shop With You” are planned for the bar and entertainment district of Lan Kwai Fong in the central business district, as well as promenades near Victoria Harbor, and in major shopping malls.

Police will deploy more than 6,000 officers to deal with potential unrest over the New Year’s period, according to the South China Morning Post newspaper, citing unnamed sources.

“I joined the lunch protest to tell Hong Kong people that we didn’t give up the five demands. My New Year wish is this movement can end soon,” said a 40-year-old clerk named Kong.

“I am a mother of two kids, I stopped bring my kids to join the protest now as it’s becoming dangerous for them to join and I don’t know which are good or bad cops anymore,” Kong said.

The police say they have arrested nearly 6,500 people since the protests began escalating in June in what is the worst political crisis faced by the city in decades.

“Hong Kong people have resolved many difficulties before. With our resilience and wisdom I believe we can once again overcome our current challenges and rebuild Hong Kong,” said Lam.

On New Year’s Day, tens of thousands are expected to join a major pro-democracy march, after it received police approval to proceed, with organizers hoping to sustain the protest movement’s momentum into the new year.

The previous such march by organizers, the Civil Human Rights Front, in early December, drew an estimated 800,000 people.

“On New Year’s Day, we need to show our solidarity … to resist the government. We hope Hong Kong people will come onto the streets for Hong Kong’s future,” said Jimmy Sham, a leader of the group told reporters.

The protests began in June in response to a now-withdrawn bill that would have allowed extraditions to mainland China, where courts are controlled by the Communist Party, and have evolved into a broader pro-democracy movement.

The demonstrations planned for New Year follow a pick up in clashes since Christmas Eve, when riot police fired tear gas at thousands of protesters following scuffles in shopping malls and in a prime tourist district.

Image: FILE PHOTO: Anti-government demonstrators use the flashlights of their mobile phones as they take part in a protest in Edinburgh Place in Hong Kong, China, December 30, 2019. REUTERS/Navesh Chitrakar

Hong Kong to end year with multiple protests, kick off 2020 with big march