Egyptian Minister of Youth and Sports Ashraf Sobhy was in a car accident on Sunday, on the Egypt-Alexandria desert road while heading to the Beheira Governorate during an inspection tour to inaugurate several sports and youth facilities in Beheira. 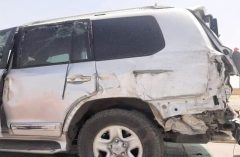 In an official Ministry statement, Sobhy was described as having superficial bruises and is expected to be discharged on Sunday. The Director of Emergency at Dar Al-Fouad Hospital Hani Moro also confirmed that the minister’s condition is stable and reassuring. As soon as he learned of the accident, the governor of Beheira Hisham Amna went to the hospital to personally visit the minister.