In the heart of the island of Zamalek, with its urban features linked to one of Egypt’s architectural renaissance periods, especially on al-Yamany Street (formerly Prince Helmy Street), the Gezira House building, the first residential building in the Gezira area will undergo major restoration.

Renewing the decorative facades of the first building on the island in a manner befitting to the period style, brings back the memory of the once historic and social status of the Gezira neighborhood: its stories that chronicle important events that its residents witnessed. Al-Gezira House building has preserved  its architectural splendor which dates back to 1910.

The architectural masterpiece is named after son of Khedive Ismail and is not only important because it is the first building in the area, (a location for villas of political, economic, art figures and decision-makers) but is also witness to an urban expansion, dubbed as the Gezira Gardens.

The streets of the neighborhood bore the names of the princes of the Alawi family. 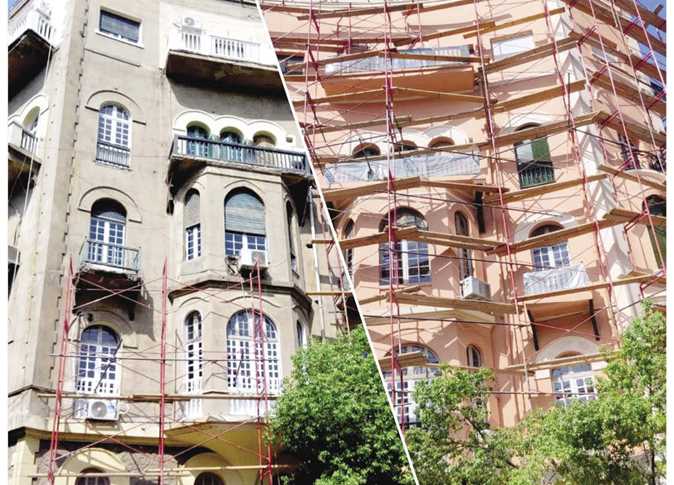 Abu Saada discussed the obstacles that prevented the preservation of Egypt’s architectural and urban heritage.

The protection from deterioration or demolition and what proposed solutions to address problems of restoration were also discussed.

Abu Saada believes that there are multiple reasons that led to the demolition and vandalism of heritage building Most commonly are that the owners are mostly looking for personal interests; seeking to benefit from the vacant lands on which architectural buildings are located.

They usually seek to build high-rise buildings or towers, comprising dozens of housing units for a high financial return; millions of pounds, he said.

He added other reasons including factors: the lack of awareness among some owners, as well as administrative and legislative factors, such as the new rental law, which turned these properties into a burden for the owners. Also the high cost of maintenance and the fact that there was no viable economic value in keeping them.

Abu Saada praised the experience of redeveloping al-Gezira House, stressing that restoring the decorations of its facades in appropriate colors has revived its splendor. There are many proposed solutions to encourage owners of heritage buildings to preserve them, through initiatives similar to the initiative of the Gezira House building.

Other initiatives include following the trends of European schools, like turning them into hotels, schools or cultural centers, he continued.

Abu Saada stressed that there is a law that guarantees the preservation of heritage buildings from deterioration, through continued maintenance work under the supervision of competent authorities.

However, there are many violations and breaches of this law, due to the owners’ efforts to demolish these buildings and build modern ones. Spreading awareness through partnership between NGOs and businessmen to revive the architectural buildings is imperative to keep heritage alive.

Cirque du Soleil to host 16 shows in Egypt this March