Pope Tawadros II, Pope of Alexandria, Patriarch of  St. Mark, received, on Monday, Martha Morcos, the widow of the priest of Alexandria.

The martyred Father Arsanios Wadeed, and Reverend Marcos Abdel Masih, a relative of the martyred father and some family members.

The Pope offered condolences to Morcos and the members of the family, and spoke with them about joy in heaven and about man’s mission in life. The meeting was attended by Archpriest Abram Emil, the representative of the Patriarchate in Alexandria.

Wadeed was subjected on Thursday evening to an attack using a sharp object in the neck, by an unknown person in Karmus, Alexandria.

Wadeed was subsequently transferred to the Armed Forces Hospital in the Mostafa Kamel area, but he died after arriving at the hospital. 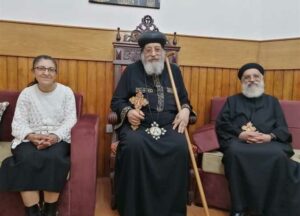 The security services arrested the perpetrator, and investigations are underway to find out his identity and motives for committing this treacherous incident.