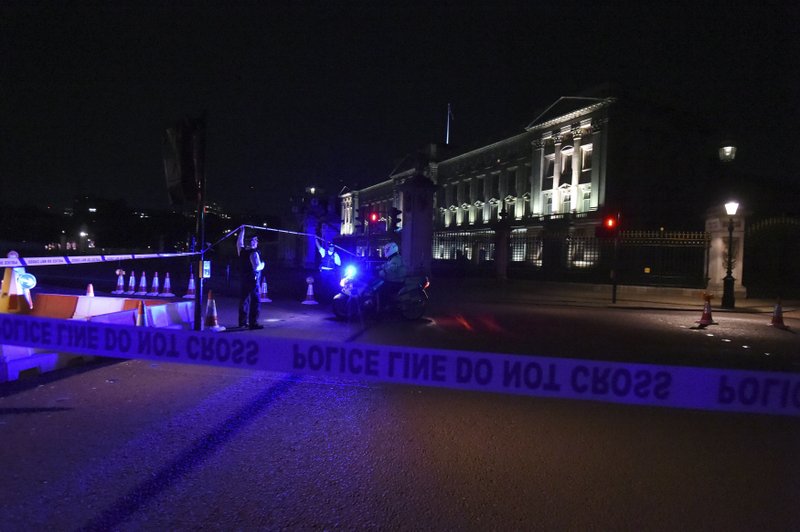 British counterterrorism police on Saturday were investigating a man who was detained after he drove a car at police outside Buckingham Palace then “reached for a 4-foot sword,” injuring three police officers.

The Metropolitan Police force said officers stopped a 26-year-old man who deliberately drove at a police van near Queen Elizabeth II’s London residence, one of the city’s top tourist attractions.

“Uniformed officers then confronted the driver of the vehicle and during that confrontation the driver reached for a 4-foot sword” in the car, Dean Haydon, commander of the Metropolitan Police counterterrorism branch, said.

The suspect repeatedly shouted “Allahu akbar,” which means “God is great” in Arabic, Haydon said. Three London police officers were slightly injured while struggling to arrest him, he added.

Haydon said the arrest was an isolated incident, adding that police presence was heightened in London regardless because of the long Bank Holiday weekend.

The suspect was taken to the hospital for minor injuries and remained in custody in a London police station. No one other than him and the police officers was injured.

British media reported that no members of the royal family were in Buckingham Palace at the time.

Buckingham Palace did not comment and directed all questions to London police. It said tours of the parts of the palace that are open to the public in summer were unaffected Saturday.

Witness Kiana Williamson said she saw officers trying to wrestle a man out of a car that had stopped near the palace. In less than a minute, “the man had been restrained and looked almost unconscious by the side of the road,” Williamson said.

Last year, a man convicted of murder climbed a palace wall and was detained on the grounds while the queen was at home.

Spain death toll to 15 as suspect linked to fatal carjacking

Finland's knife attack suspect to appear in court, may be via video link