The 54th Venice Biennale – the oldest in the world – opened on 4 July with the title "ILLUMInations". Whereas the model of the modern nation state has been rejected as ancien regime by both radical philosophers and transnational market economies, the Biennale is hosting a record number of 88 national pavilions that participate in the race of reaffirming the nation state and the notion of collective representation.

Curated by Bice Curiger, the Biennale’s title "ILLUMInations" refers to art’s capacity to “sharpen perception” and open a door for epiphany, unexpected aesthetic encounters, and ultimately the possibility of enlightenment. However, the title also plays with the idea of the “nation” – to bring nations to light, fix them in reductionist national forms for the gaze of globetrotting art tourists, and territorialize nations in a city that seems in a constant state of topographic fluidity.

Beyond the glossy façade of representations, arty-party gatherings and institutionalized discussions, there lay more fundamental questions pertaining to the significance of the format of the Biennial: the relevance of representing nations, as well as the economy and ideology of the event. While paradoxically operating in a transnational framework, the Biennale still relies on the idea of the nation state as a core concept for the production of the event. And yet, as this concept fades in the conditions of neo-liberal capitalism and globalized financial economy, it is the terrain of representation in which the power of the state is increasingly exercised. It is then, when the nation state fades, that it needs to reassert itself hysterically as representation.

While the Venice Biennale as a representational event and a spectacle obscures the labyrinthine politics and exercises of power evolving at the local level of the nation state, it also reveals those structural conditions and power dynamics that inform the selection processes of representative artists, the sweat and tears curators, artists and commissioners shed while working with ministries (or perhaps the other way around), and the ways in which power is exercised within the local contexts in a struggle for symbolic value and self-presentation.

Nevertheless, representation always leaves an excessive trace, which unmasks its very condition as representation and de-neutralizes it. It is this battle for the recognition of national cultures through the art event, and as an extension, a particular representational politics at the level of the state that the Egyptian pavilion in Venice exposes. But it also exposes another tension, one between a singularity of practice and its subsequent generalization as a token for an epoch and geography.

The Egyptian pavilion in Venice reflects the moment of revolutionary urgency when it presents Ahmed Basiony’s work, an artist who died during the "Day of Rage" on 28 January. As a project licensed by the new post-Mubarak Ministry of Culture, the pavilion is both comfortably accommodated within the rhetoric of the new transitional government that claims to take its legitimacy from Tahrir Square and is anxiously situated vis-a-vis the constellations of political power in revolutionary Egypt.

Artist Shady al-Noshokaty, who is the executive curator of the pavilion and the late Bassiouny’s friend and mentor, approaches the pavilion as a space for personal engagement with a practice, and namely, the artist’s last work "Thirty Days Running in The Place" (2010). Curated by Aida Eltorie, the pavilion displays a five-channel video installation randomly playing the documentation of the artist’s performance along with footage from Tahrir Square that Basiony himself recorded on 25 January. Though the two types of documentation are juxtaposed, al-Noshokaty is careful not to package Basiony as a martyr, but as someone with the double function of an artist whose work is dealt with as a singularity on its own terms, and as a citizen-activist-witness to the Egyptian uprising. This dual approach seeks to do justice to Basiony’s artistic practice but also to his vocation as a citizen.

On 25 January, Basiony was present in Tahrir Square in a street cleaner’s blue uniform with bags of clothes pegs hanging from his two sides – a reference to his earlier performance "Symmetrical System" (2009). The artistic performance for him was rather separate from the political performance that took over downtown Cairo. However, the line between these two becomes very thin in the Egyptian pavilion, as the viewer’s experience is pre-emptively foreclosed. Upon entrance to the space, a text displaying Basiony’s last emotionally charged Facebook status update is fixed to the wall.

Given the long history of the Egyptian representation in the Venice Biennale and the mistrust of governmental structures toward contemporary art practices and its actors, it came as a surprise that al-Noshokaty, an artist associated with the so-called “independent” art scene, was entrusted by the Ministry of Culture to organize the 2011 pavilion. However, ambiguously, within the current cultural politics in Cairo in the context of the public authority’s desire for legitimization upon the revolutionary moment, the support also seems quite expected.

What seems to be a moment in which a possibility has opened up for working hand-in hand with public authorities to present Egypt in the biennale through a “contemporary” artist, yet again turned into a battleground for legitimization, a display of power and hijacking of the symbolic value of representation. Whereas in previous years, the ministry under Farouk Hosny presented artists whose work largely confirmed the dominant identity discourses promoted by national culture, an identity constructed through the tension between Egypt’s Pharaonic past, its religious traditions and forces of modernization, this year the proposition came from the contemporary art scene. Thus, it raised hopes that the era of artist-bureaucrats licensed to organize the national pavilion as hand-overs from the ministry was over.

The politics that took place around the pavilion, however, was no more different than those of the previous years. The ministry went through pains to diminish al-Noshokaty’s role in the organization of the pavilion through petty acts such as erasing his name from the submission to the Biennale catalogue "ILLUMInation" or even removing Basiony’s name from the cover of the pavilion’s publication and inserting a picture and introductory note by the newly appointed Chairman of the Egyptian Fine Arts Sector, Ashraf Reda right after the catalogue’s title page. While doing this, it tried to erase the personal and subjective engagement with the artist through complex layers of (dis)identification that al-Noshokaty was eager to emphasize. Instead, it monumentalized Bassiouny as a memorial token for new Egypt by putting its legitimizing stamp on the pavilion in a blatant manner.

The struggle to appropriate Basiony’s practice and erase al-Noshokaty’s subjective engagement with the artist’s work serves a dual function. Firstly, it attempts to tame the impact of the pavilion on cultural politics in Cairo, and namely, it prevents the possibility of “reconciliation” between the dominant national cultural representation and the contemporary “internationalized” art scene. Secondly, it cancels the radical impact of Bassiouny’s death as a citizen-activist and turns him into memorabilia; one must confess that the pavilion itself is not innocent of this memoralization. As Reda’s attempt to deliver a speech and distribute 25 January stickers and flags at the opening of the pavilion in Giardini was rendered unsuccessful, questions of recognition, legitimization, and ultimately power emerge. 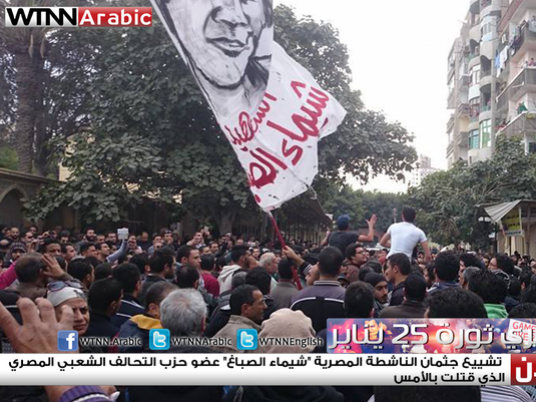