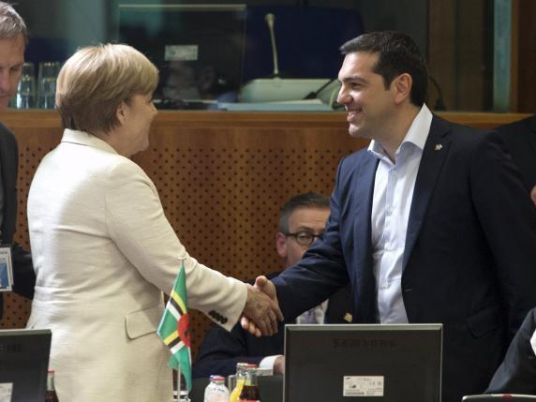 Support for German Chancellor Angela Merkel's conservatives has slipped by two percentage points due to divisions within her parliamentary bloc over a third bailout for Greece and even her own popularity has taken a hit, a poll showed on Wednesday.
The Forsa poll put the conservative bloc of Merkel's Christian Democrats (CDU) and Bavaria's Christian Social Union (CSU) on 41 percent, down two points from a week ago.
However, the Social Democrats (SPD), who share power in a 'grand coalition' with Merkel, failed to gain, staying put at 23 percent. The radical Left and rightist Alternative for Germany (AfD) inched up to 11 and 4 percent respectively.
The share of people who would vote for Merkel in a direct election for chancellor also fell to its lowest level this year, dipping two percentage points to 53 percent.
However, she is still one of Germany's most popular post-war chancellors and while her SPD rival Sigmar Gabriel gained two points, he is still far behind at 14 percent.
Forsa chief Manfred Guellner said the reason for Merkel's decline was last Wednesday's parliamentary vote on an 86 billion euro (62.92 billion pounds) aid package for Greece when a record rebellion in Merkel's ranks highlighted the opposition she faces on Greece.
He said while 41 percent was the average support for the conservatives between Monday and Friday last week when the poll was conducted, it had fallen to 40 percent by Friday.
The relatively high number of rebels "meant Angela Merkel hit her lowest level this year," said Guellner in a statement.
Merkel, who on Wednesday heads to the eastern town of Heidenau where anti-refugee protests turned violent at the weekend, is also facing criticism for her handling of the problems caused by a wave of asylum seekers arriving in Germany.