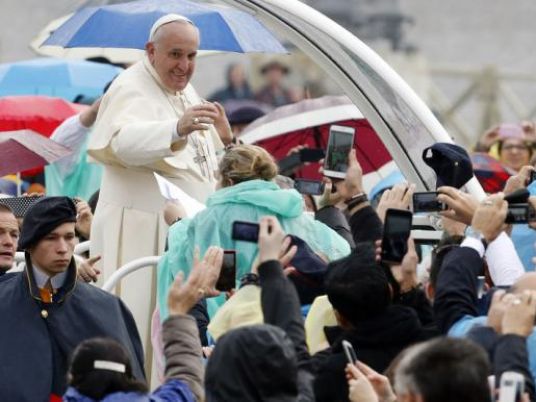 Pope Francis put his shoulder to the doors of the Catholic Church and shoved them open a little wider Friday, calling for the church to be more tolerant in practice, while not changing any official doctrines.

He urged priests around the world to be more accepting of gay men and lesbians, divorced Catholics and other people living in what the church considers "irregular" situations.

"A pastor cannot feel that it is enough simply to apply moral laws … as if they were stones to throw at people's lives," Francis writes in a sweeping paper outlining his stance on family matters.
He urges more common sense and less unthinking following of rules — what he calls "discernment."
"By thinking that everything is black and white, we sometimes close off the way of grace and growth," he writes.
Path of Jesus
The paper has much to please both liberals and conservatives, though it may not go far enough for either group within the church.
"I understand those who prefer a more rigorous pastoral care which leaves no room for confusion. But I sincerely believe that Jesus wants a Church attentive to the goodness which the Holy Spirit sows in the midst of human weakness," he writes.
The statements come in a highly anticipated paper called "On Love in the Family," or "Amoris Laetitia" in Latin. Running more than 260 pages, it comes after Francis summoned the world's Catholic bishops twice to discuss the issues in conferences known as synods.
The first was in October 2014, and the second was a year later.
Francis has been working on the document since then.
A 'groundbreaking new document'
For those paying attention to Francis since he became pope three years ago, the opinions in the paper are unlikely to come as a surprise.
This is, after all, the pope who said, "Who am I to judge?" when asked about homosexuality.
But Friday's paper is not simply a remark made in an interview.
It's what's called an "apostolic exhortation."
That means it is an official statement from the pope on how Catholics should live their lives. It's the second exhortation Francis has issued since taking the throne of St. Peter, and the first based entirely on synods he summoned himself.
His aim "is to help families — in fact, everyone — experience God's love and know that they are welcome members of the church," said the Rev. James Martin, a Jesuit priest and writer who called the paper a "groundbreaking new document."
On divorced Catholics, whose religious lives Francis has made it a priority to ease, he writes: "The divorced who have entered a new union should be made to feel part of the Church."
"It can no longer simply be said that all those living in any 'irregular situation' are living in a state of mortal sin," he writes.
Shift on divorce
On divorced Catholics, whose religious lives Francis has made it a priority to ease, he writes: "The divorced who have entered a new union should be made to feel part of the Church."
Francis has pushed to make it easier for Catholic couples to get an annulment of their marriages if they break up. That allows them to continue to participate fully in church life if they remarry, including taking the sacrament of Communion.
He does not say explicitly in Friday's paper that divorced Catholics should be allowed to take Communion, Martin observed.
The reception of Communion is not spelled out here, but that is a traditional aspect of 'participation' in church life," said Martin.
The Pope does not change Catholic doctrine on homosexuality, marriage, birth control or abortion in the paper.
In fact, he reiterates that marriage between a man and a woman remains the Catholic ideal, superior to other forms of union.
"In order to avoid all misunderstanding, I would point out that in no way must the Church desist from proposing the full idea of marriage," he writes.
A "great variety of family situations … can offer a certain stability, but de facto or same-sex unions, for example, may not simply be equated with marriage," he says.
And he holds the line against artificial birth control, rejecting the phrase "safe sex."
The very wording, he says, operates as if "an eventual child were an enemy to be protected against."
More tolerance, less judgment
But he calls much more for tolerance and mercy than for judgment in the paper.
"There is no stereotype of the ideal family, but rather a challenging mosaic made up of many different realities, with all their joys, hopes and problems," he writes.
"Every person, regardless of sexual orientation, ought to be respected in his or her dignity and treated with consideration."
There are about 1.2 billion Roman Catholics around the world, the Vatican calculates. That's just over half the world's Christians, according to the Pew Research Center, a think tank in Washington, DC.
The Catholic population in the so-called global South is growing in influence. Pope Francis himself is a reflection of that trend — he's from Argentina, making him the first Pope from the region.
The Pope tells priests that they should made decisions appropriate to their local conditions.
"Each country or region … can seek solutions better suited to its culture and sensitive to its traditions and local needs," he writes, in a possible effort to satisfy both liberals and conservatives by decentralizing authority.
He tries to take the heat out of the culture wars by admitting a measure of Catholic responsibility for them.
"At times the way we present our Christian beliefs and treat other people has helped to contribute to today's problematic situation," he writes.
In addition to the many sections of the paper that will be seen as statements of Vatican policy, the paper also explores the practical problems that married couples face, and advises them to work through them together.
And Francis allows a little poetry to seep into the document, too, writing: "Young love needs to keep dancing towards the future with immense hope."