Pope Benedict, speaking in his last Sunday address before becoming the first pope in almost six centuries to step down, said he was following God's wishes and that he was not abandoning the Roman Catholic Church.

Benedict, speaking in a strong voice to tens of thousands of people in St. Peter's Square, said he would continue to serve and love the Church by praying and meditating after his historic abdication Thursday.

"The Lord is calling me to climb onto the mountain, to dedicate myself even more to prayer and meditation," he said to cheers of "Long Live the Pope."

"But this does not mean abandoning the Church. Actually, if God asks this of me, it is precisely because I can continue to serve her with the same dedication and the same love I have shown so far," he said.

But he said he would be serving the Church "in a way more in keeping with my age and my forces."

The Sunday address was one of Benedict's last appearances as pontiff. On Wednesday, he will hold his last general audience in St. Peter's Square and on Thursday he will meet with cardinals and then fly to the papal summer retreat south of Rome.

Cardinals will begin meetings the next day to prepare for a conclave, likely to start in mid-March, where they will elect a new pope from among themselves.

“Perhaps in some way either provoked or not prevented,” says Pope Francis 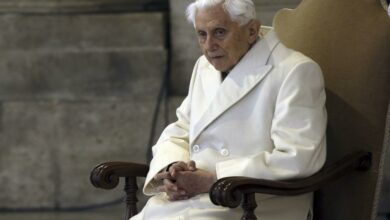 Retired pope asks pardon for abuse, but admits no wrongdoing