Pope of Alexandria Tawadros II held a meeting with the President of Italy Sergio Mattarella on Monday in Rome, discussing various topics related to Christianity in Egypt, such as the outstanding role the Coptic Orthodox Church and Al-Azhar institution played in combating extremism.

According to the Ambassador of Egypt to Italy Hesham Badr, Mattarella said that Christians enjoy more peace alongside Muslims and better living conditions in Egypt compared to other countries in the Middle East, where they still suffer conflict and persecution.

Mattarella added that Egypt and Italy’s government and citizens alike are keen on developing close bilateral relations together. Countries of the Mediterranean Region must keep unified under the leadership of Egypt and Italy, Mattarella said.

Pope Tawadros II presented an overview on the armed forces efforts against terrorism in Sinai, in addition to the improvement of Egypt’s economic development and the living standards for it’s people.

The pope took time to praise the government’s role in restoring churches demolished by the Muslim Brotherhood group during their rule of Egypt. Pope Tawadros II had also supervised arrangements to receive the first group of Italian pilgrims for the Holy Family Journey in June, stating that the number of Italian tourists visiting the route has increased.

The pope arrived at Rome airport Friday morning, accompanied by a church delegation on visit for a few days to Italy.

They attended the ecumenical prayer that Pope Francis of the Vatican called for in the city of Bari, south of Italy, to alleviate the suffering of Christians in the Middle East.

Photos: Pope Tawadros receives the widow of slain priest of Alexandria and family 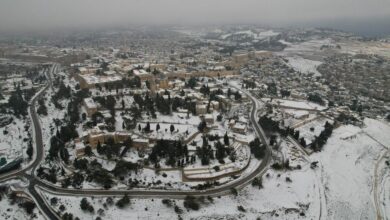