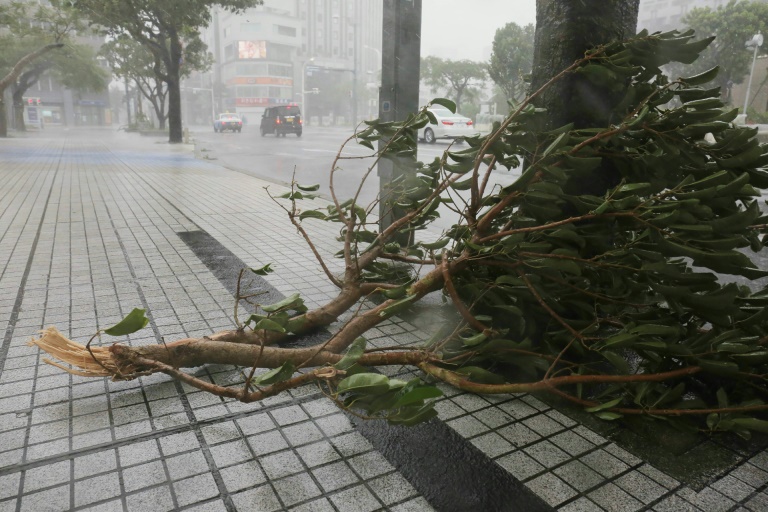 A powerful typhoon pummeled Japan’s southern island of Okinawa Saturday, injuring at least 17, as weather officials warned the storm would rip through the Japanese archipelago over the weekend.

Typhoon Trami, packing maximum gusts of 216 kilometers (134 miles) per hour near its center, was forecast to hit the mainland early Sunday and cause extreme weather across the country into Monday.

Television footage showed branches ripped from trees by strong winds blocking a main street in the regional capital Naha, as well as torrential horizontal rain and massive waves splashing over breakwaters on a remote island in the area.

Local policemen in rain jackets wielding chainsaws were battling the furious wind to remove fallen trees. The gusts were strong enough to overturn a truck and smash the glass windows of a bank.

Some 700 people were evacuated to shelters in Okinawa and electricity was cut to nearly 200,000 homes, public broadcaster NHK said.

At least 386 flights were cancelled, mainly in western Japan, according to NHK.

West Japan Railway said it would suspend all services in the Osaka region and cancel some Shinkansen bullet trains by noon on Sunday.

Seventeen people suffered minor injuries in storm-related accidents in Okinawa and several houses suffered some damage but no one was feared dead, local officials said.

“The number may rise further as we are in the middle of sorting out figures,” said Masatsune Miyazato, an official at the island’s disaster-management office.

“People in Okinawa are used to typhoons but we are strongly urging them to stay vigilant,” he told AFP.

The weather agency warned people across Japan to be on alert for strong winds, high waves and heavy rain.

“Please stay on alert, evacuate early and ensure your safety,” the official said.

After raking the outlying islands, the typhoon is forecast to pick up speed and approach western Japan on Sunday “with a very strong force” as it barrels over the mainland, he added.

There have already been heavy downpours in large areas of western and eastern Japan, including the capital, as the storm spurred a seasonal rain front.

The weather agency issued a warning of landslides in Wakayama, western Japan, where local authorities separately announced that a local river had reached “dangerous levels”.

Fishermen in Kagoshima bay, where the typhoon is expected to make landfall, were already making preparations, tying down their boats as Trami approached — even as forecasters warned that another typhoon was following in its course.

Angler Masakazu Hirase told AFP: “It’s dreadful because we already know there’s another typhoon after this one but you cannot compete with nature. We do what we can to limit the damage.”

If the forecast holds, it will be the latest in a series of extreme natural events to strike Japan.

Western regions are still recovering from the most powerful typhoon to strike the country in a quarter of a century in early September. Typhoon Jebi claimed 11 lives and shut down Kansai Airport, the main regional airport.

Officials at Kansai were already making preparations, placing sandbags and warning that they may be forced to close the airport.

Deadly record rains also hit western Japan earlier this year and the country sweltered through one of the hottest summers on record.

Also in September, a magnitude 6.6 earthquake rocked the northern island of Hokkaido, sparking landslides and leaving more than 40 people dead.