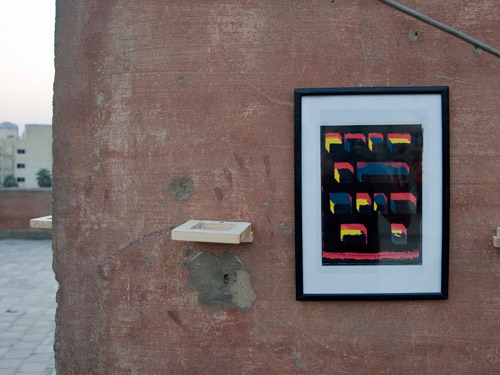 It was loneliness that prompted artists Hady Kamar and Jenifer Evans to start working together, Kamar jokingly says about their collaboration for the past few months.

So far, their series of screen prints on paper, layered with textual and figurative elements, subtly share the aesthetics and taste of graphic novels. The created imagery is playful, involving much repetition, yet uniqueness at the same time.

The rooftop of Kamar’s apartment building was the setting for their second, untitled exhibition, held for a single night in July. As audiences and friends gathered on the Nile-view terrace, there was something quite melancholic about watching the artwork at dusk, in a gallery that would exist only for a few hours.

Each of the screen prints hung on the walls presented an almost identical layout: a grid of four rows of colored parallelepipeds (three dimensional boxes whose faces are all parallelograms). On the boxes’ front side, you could see hand-drawn sea waves, a series of smiling mouths, a computer, or a hand.

Occasionally, commentary placed at the bottom of the prints referred to old private conversations, or to the etymology of the word “desire.” We learned, for instance, that the noun comes from the Latin phrase “de sidere,” meaning “from the stars.”

In relation to an art scene like Cairo’s, where many artists tend to justify their work with a meaning or function, Evans — who is also an Egypt Independent staff writer — says that the duo is “not trying to do anything.”

Subject matter is, however, present in the artwork informed by the artists’ areas of interests, although in a rather open-ended, subtle way.

Evans is mainly interested in issues of migration, but also languages and labels. A migrant herself, she reflects on the experience of being, or not being able, to cross borders and “also on the contrast between people’s [migratory] physical experience and the language used by bureaucracy to describe it, which is completely absurd. There is a gap between reality and how it is retold,” she explains.

Kamar’s work, which is more text-based, is rather personal.

“Most times, I just put down things I am reading at the moment as a hobby,” he says. “I am interested in the grandness of space, distance and time. They are unknowable … but just as much as our little human relations, that can hold the same gravity and magnitude.”

Viewing the work, audiences easily attach a range of personal feelings to it, making it familiar.

“I could never initiate a conversation about space in my real life, as I am not knowledgeable enough. Yet during the show, people came and told me, ‘I can understand perfectly what is being said here,’” says Kamar.

The sense of longing, separation and melancholic distance diffused across his works can be easily related to Evans’ focus on human migration. In a way, Kamar seems interested in the abstraction of Evans’ subject matter.

Their works come together in a fluid way that allows viewers to draw implicit relationships — an effect that Kamar says is totally unintentional, and happens only at the moment of the show, after an interval of separation.

The artists explain the nature of the collaboration with the same ease that transpires through their images. The framing template comes first; the two decide on it together, whether it is a box or a bottle, like the dominant pattern in their first show, held in February at Evans’ apartment.

Different variations of the dominant motif are produced by the two artists, who then each add personal elements related to their respective fields of interest. All the works finally rejoin on the day of the show.

The templates and content material are intentionally treated as separate elements during the creative process. Printing the templates and later layering them with personal motifs involves a temporal gap. This interruption allows a re-evaluation of the template imagery.

“A few months passed between printing the frames and our second show,” says Kamar, adding that when he went back to work on the prints, it felt like they were already an artwork on their own. “I was layering art on top of art.”

The repetitive nature of the chosen templates hints at infinite possibilities based on the next choices made by the artists.

“It all seems made of simple decisions,” as Kamar describes it.

Then, step by step, the pieces slowly gain aesthetic specificity, and “the small decisions become monumental.”

The spontaneity of the process is something that this artistic duo cherishes. Kamar explains that he does not really want to think about the possible ties between the subjects of their individual final works “in order not to start doing it intentionally.”

The only intentional junctions between their practices remain localized at the beginning of the creative process and at its very end, with the exhibition.

“I wonder whether our works would look the same if shown separately,” asks Evans. Probably not — Kamar’s romantic taste and Evans’ distinctive sarcasm influence and play on one another in a sort of imaginary conversation, which they plan to continue.

In the near future, the pair would like to realize more shows and then work on a publication. It would include the prints but also, as Evans explains, “some of the texts that we have taken words out for our pieces. There is something very cartoonish about our works. There is a lot of narrative going on and a magazine or graphic novel could create even more narrative.”

The publication would constitute a third layer of their work.

“I am really interested in this addition of other text or elements that have nothing to do with the [original template] images themselves. This mechanism provides a certain kind of freedom,” Kamar says. “Indeed, I feel like there is freedom throughout the process.”