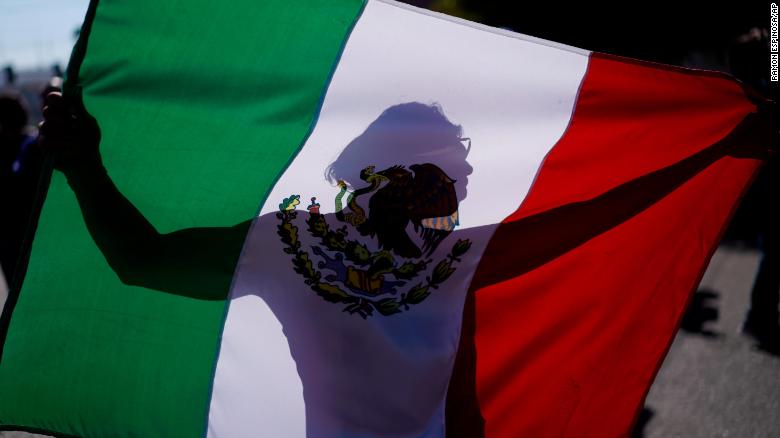 Tijuana, Mexico (CNN) – In this Mexican border city, a line of police stood in riot gear.

But the authorities weren’t guarding against the thousands of migrants who’ve come to Tijuana in recent days on their journey to seek asylum in the United States.

They were blocking a crowd of protesters who had gathered Sunday near a sports complex where more than 2,000 Central American migrants are staying.

Police said they were standing guard after protesters pushed through fencing and tried to march toward the complex.

Waving Mexican flags and wearing patriotic colors, protesters told CNN there isn’t enough space in Tijuana to house the growing number of migrants, who they accused of putting their city’s security at risk.

“I feel offended. I feel hurt. I feel assaulted. I feel afraid. I have never felt that way in my city, and now I feel it, and that isn’t fair,” said Mariana González.

The Tijuana resident said her city already has enough problems and shouldn’t put up with outsiders bringing more.

But some locals dismissed the protests as a small gathering of fringe groups that don’t represent views of most residents of Tijuana, where more than 1 million people live.

“We have to support the migrants and show solidarity as human beings,” said Tijuana resident Eugenia Arsola, “not give hateful speeches or promote hate.”

Alberto Rivera said a serious problem had crept into the border city, but it wasn’t the migrants.

More than 2,000 Central American migrants arrived in the border city of Tijuana in recent days, and about 3,000 more migrants are estimated to be in Mexicali, Mexico, another border city about 100 miles away, UNHCR spokeswoman Francesca Fontanini said.

As large groups of migrants trekked through Mexico for weeks, many noted the outpouring of support they received along their journey.

In southern Mexico, residents rushed to the streets to hand out food and donated clothes to passing migrants.

US Army unfurls miles of fencing along border with Mexico