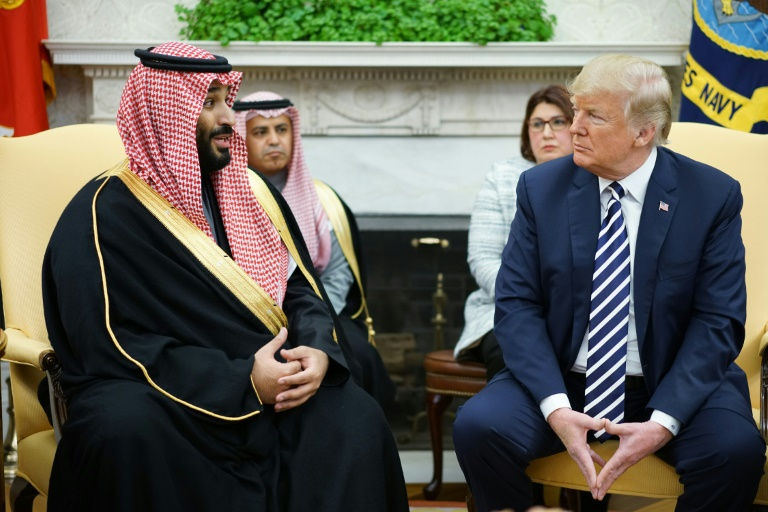 Saudi Arabia’s crown prince received an effusive welcome Tuesday at the White House from US President Donald Trump, who hailed a “great friendship” with the kingdom — but made no public mention of the sticking points in the burgeoning alliance.

In front of the cameras, it was all back-slapping, handshakes, smiles and warm words between Trump and the heir to the Saudi throne, Mohammed bin Salman, who was seeking to burnish his leadership credentials.

“It is an honor to have the crown prince of Saudi Arabia with us,” Trump said as the pair prepared to have lunch in the Cabinet Room.

“The relationship is probably the strongest it’s ever been — we understand each other.”

Prince Mohammed, 32, was making his first visit to the White House since he cemented his role as the kingdom’s de facto political leader, and as he pursues economic and social reforms long sought by the West.

Trump, touching on the sensitive shaking-out happening inside the kingdom, said “some tremendous things have happened since your last visit to the White House.”

Prince Mohammed’s reformist message and the promise of Saudi investment in the United States has endeared him to the neophyte US president — 39 years his elder — and America’s own political princeling Jared Kushner, Trump’s son-in-law.

Trump and MBS — as he is known in Washington’s corridors of power — have seen eye-to-eye on concerns about Iran’s military activism, Middle East peace, relaxing Saudi Arabia’s deeply conservative laws and over their love for mega-investments.

“Saudi Arabia is a very wealthy nation and they are going to give the United States some of that wealth hopefully, in the form of jobs, in the form of the purchase of the finest military equipment anywhere in the world,” Trump said.

But an all-out PR campaign designed to burnish the crown prince’s image, and declarations that “relations have never been better,” mask several problems that could spoil the honeymoon.

As Prince Mohammed arrived in Washington, word trickled out that Saudi Aramco — the kingdom’s energy behemoth — was cooling on the idea of a stock listing in New York, something for which Trump has publicly lobbied.

Trump ducked a question about the issue.

The news was accompanied by expressions of concern about a US law that exposes Saudi Arabia to legal action over the 9/11 attacks, which Riyadh would dearly like to see removed.

“The Trump administration will not be able to offer the necessary guarantees on any changes to US law that would reassure Saudi Arabia and the IPO is simply too important to place in jeopardy,” said Ayham Kamel of the Eurasia Group consultancy.

Another point of friction is the war in Yemen, where Saudi Arabia leads a coalition fighting the Iran-backed Huthi rebels.

That devastating three-year-old conflict was an early proving ground for the prince, who is also the minister of defense, but it has been beset by allegations of atrocities against civilians, and strategic drift.

Just hours after the prince left the White House, the US Senate rejected a bipartisan bid designed to withdraw US intelligence and reconnaissance support for the war.

Senators voted 55-44 to kill the effort, which was aimed as a clear warning to the White House against signing a blank check.

Prince Mohammed later met with Republican Senators Dan Sullivan, Tom Cotton, and Lindsey Graham, along with Democratic Senator Joe Manchin, in talks which the Saudi embassy said showed the “multidimensional” nature of the kingdom’s relations with the US.

Trump was also expected to press his guest to end a standoff with Qatar, which has wrecked Gulf Cooperation Council unity and put the US president’s plans for a US-Gulf summit at Camp David in doubt.

But the most delicate discussions could be about Saudi Arabia’s nuclear program, which is mooted as civilian-focused but could quickly become a platform for building a weapon.

“Saudi Arabia does not want to acquire any nuclear bomb, but without a doubt, if Iran developed a nuclear bomb, we will follow suit as soon as possible,” Prince Mohammed told “60 Minutes.”

Saudi Arabia’s nuclear program is “a massive contract that also has massive geopolitical implications,” according to the Soufan Group, another political consultancy.

“Letting the deal go through without the prohibitions (on nuclear weapons) would be potentially disastrous,” the group said.

But if these niggles turn into full disputes, it is likely to be only behind closed doors.

After his visit to Washington, Prince Mohammed will embark on a nationwide tour, visiting New York, Boston, oil hub Houston, Los Angeles and Silicon Valley. He is expected to remain in the United States through the first week of April.