Qatar’s first public election of a consultative assembly is set to take place. The Arab state’s ruling Emir Sheikh Tamim bin Hamad Al Thani has announced October 2 as the date. Qatari citizens who are at least 30 years old are able to register as candidates for the advisory council, called the Shura Council, until next Thursday.

The Shura consists of 45 members, with 30 now to be elected by the population and 15 appointed by the emir. Up until now, the emir used to appoint all 45 members of the Shura, which is chosen every four years.

Prime Minister Sheikh Khalid bin Khalifa Bin Abdulaziz Al Thani has called on citizens “to participate positively in the first elections to be held in the history of the State of Qatar to form the elected Shura Council,” the state-run Qatar News Agency reported.

This move implements — with almost 18 years delay — Qatar’s new constitution, which was approved in a 2003 referendum. So far, citizens have been able to cast their votes directly only in local elections and referendums on constitutional amendments.

“The election of the Shura Council definitely represents a new experience. Even if the result is not a truly democratic parliament, but rather an advisory body, it is still a step toward democracy,” Ahmed Yousef al-Mlifi, a political analyst in Kuwait, told DW Arabic.

However, he also sees the limitations of the council. “Council members can only question the prime minister on his policies and ask for a vote of confidence if two-thirds of the members agree. And yet, this is almost impossible given the high number of members appointed by the emir,” he said. 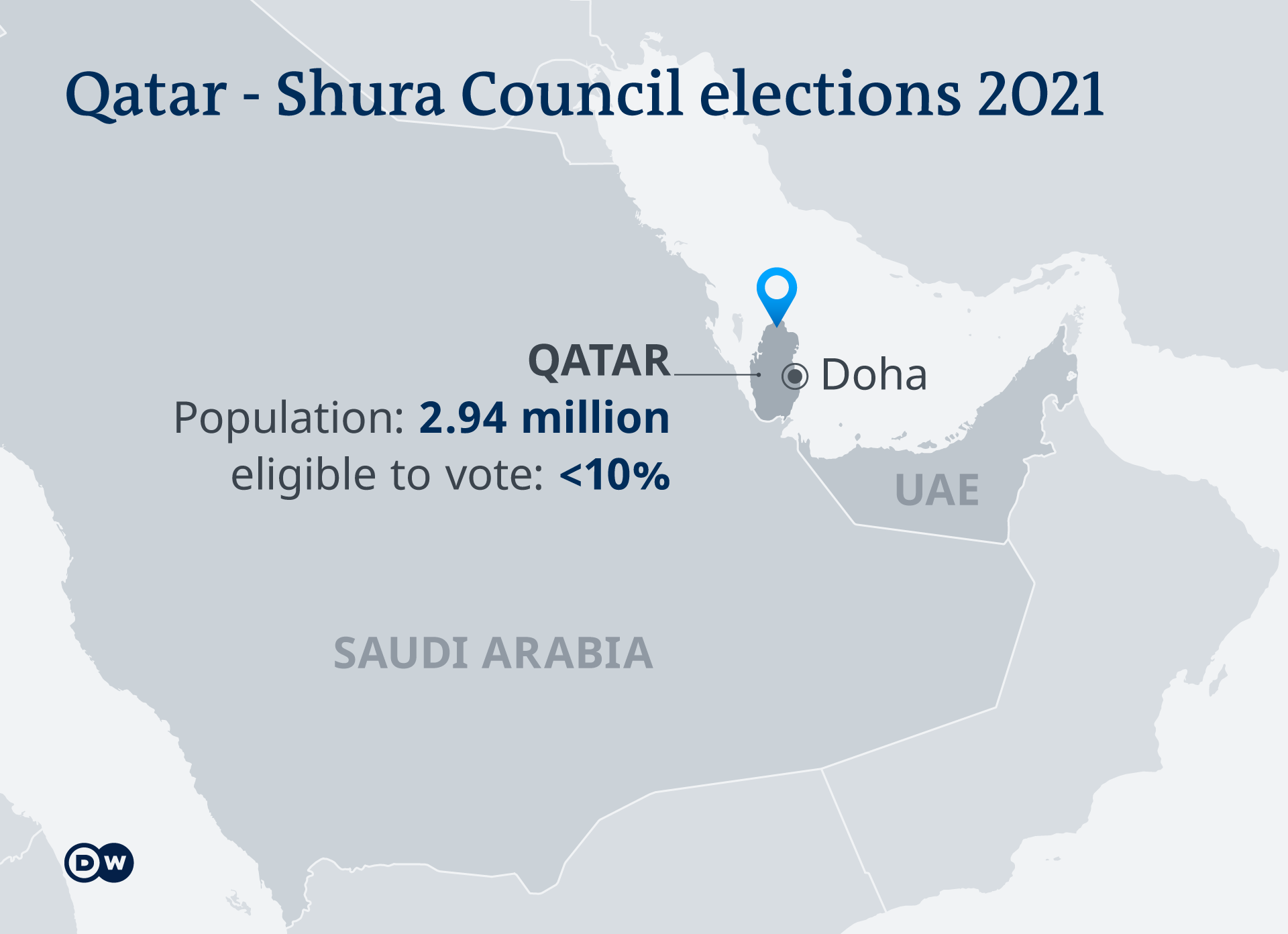 Dr. Cinzia Bianco, research fellow at the European Council on Foreign Relations, sees the election of the Shura more in a geopolitical context and less as a push toward democracy. “Bahrain and Oman have similar consultative bodies, and Kuwait even has a fully elected assembly, so I’d rather say that Qatar is catching up with the neighbors on the one hand, and on the other, it can be seen as organic development of the institutional political life in Qatar,” Bianco told DW on the phone.

However, she, too, highlighted the limits within the wider political discourse. “There is a good chance that the council will enrich the conversation on economic and social issues, but all major political segments, like foreign policy, defense, security and investment policy are excluded,” Bianco told DW.

A (not so) general election

By far not everyone in this small emirate with its population of 2.94 million is eligible to vote or to be elected. Ninety percent of the population is excluded from casting ballots, as they are (mainly Asian) foreigners. This leaves fewer than than 300,000 Qatari citizens of legal age who can exercise their right to vote.

This group includes the descendants of those who lived on Qatari territory before 1930 and have not moved away since. Also considered Qataris are those who can prove they are descended from a Qatari family.

However, those who have not lived constantly on the territory of the state since it was founded in 1971 are excluded. This especially applies to some members of Qatari tribes — most notably the nomadic al-Murra tribe.

The relationship between the al-Murra tribe and Qatar’s ruling family has been repeatedly difficult, most recently in 2017 when some members sided with Saudi Arabia at the beginning of the 3 1/2 years of boycott that was dubbed the Qatar crisis. The dispute was resolved only at the start of 2021.

Consequently, news that members of the al-Murra tribe are explicitly excluded from voting has sparked an outcry among the group. In Doha, seven people were referred to the Public Prosecution Office on charges of “inciting racial and tribal strife” after they had criticized the terms of the elections for the upcoming Shura elections. 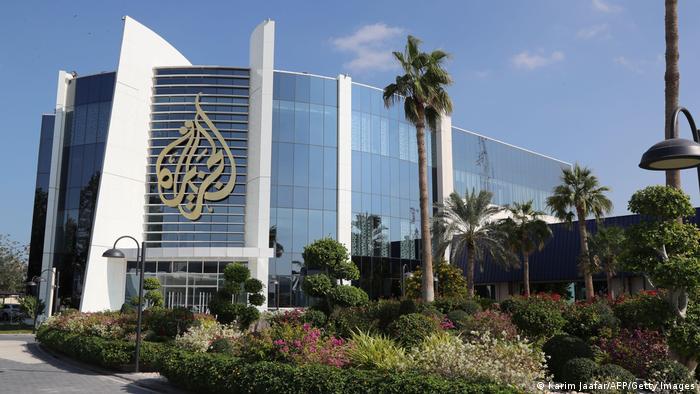 On social media, above all on YouTube and Twitter, videos of protesters in Doha were widely shared. However, experts have pointed out that — for example, under the Arabic hashtag #BoycottQatarElections — presumed Saudi bots seem to have amplified the scope. Videos of protests were initially posted by one account only but were followed up by a torrent of fake news. Marc Owen Jones, a researcher at the Qatari Hamad bin Khalifa University in Doha even believes that most tweets of protesters were manipulated:

If Jones’ assumptions are correct, this could indicate the unease of neighboring states in the face of Qatari reforms.

“However, I don’t believe that the major states of the Arabian Peninsula are particularly concerned about Qatar’s electoral law,” Eckart Woertz, director of the GIGA Institute for Middle East Studies in Hamburg, told DW.

He feels that the idea of democratization in Qatar is unlikely to upset its neighbours, because in all countries on the Arabian Peninsula, the right to vote and stand for election is handled very restrictively. “Overall, that is likely to remain the case in Qatar as well,” he said.

Cinzia Bianco also doesn’t see the protests as a general movement within the Qatari population. “Qatar’s population is, in fact, tiny and fairly homogeneous; there is no actual grievance that could use the Shura Council as a multiplier of political threats to the regime,” she told DW on the phone.

Qatar, one of the world’s biggest producers of gas, is a close US ally and has one of the highest per capita incomes in the world, averaging above $59,000 (€50,230). This also makes social and political unrest seem rather unlikely. 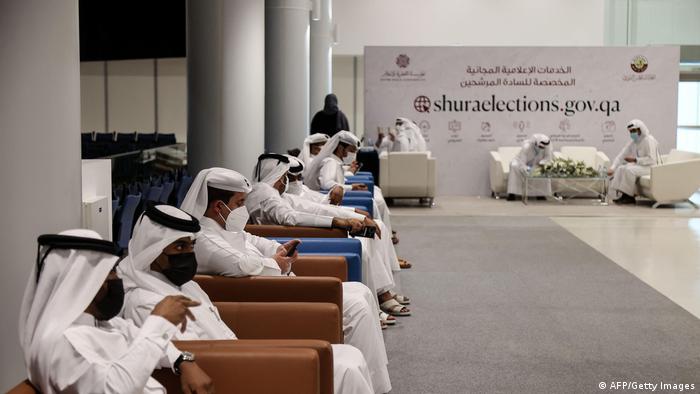 PR coup for the global audience?

Moreover, Bianco also doesn’t believe that the emir is following up on the election for PR reasons. “Qatari leaders have been talking about the Shura election since 2009, and they have waited until now to implement it, even though in the past, they would also have had good reasons to do a PR stunt: for example, at the beginning of the Qatar crisis, when there was strong and negative media attention focused on their support for Islamist groups,” Bianco told DW.

She added that “in general, carrying out institutional reforms to get a good press — something which is generally also short-lived — is not that common in the Gulf.”

However, positive media coverage is certainly not unwelcome at the moment either. For example, Qatar is home to cadres of the Egyptian Muslim Brotherhood as well as those of the Afghan Taliban, who have just seized power in Kabul.

However, the emirate is at the same time actively involved in evacuating Afghans and internationals via Doha to other countries. The upcoming Football World Cup in 2022 might also serve as a welcoming front to a more democratic image.

One thing seems for sure: The voter turnout on October 2 is expected to be very high. In 2003, around 85 percent of the eligible population voted in the referendum, and there are indications that a similar percentage will cast ballots in 2021.

Egypt court returns Mansour, his board to Zamalek SC