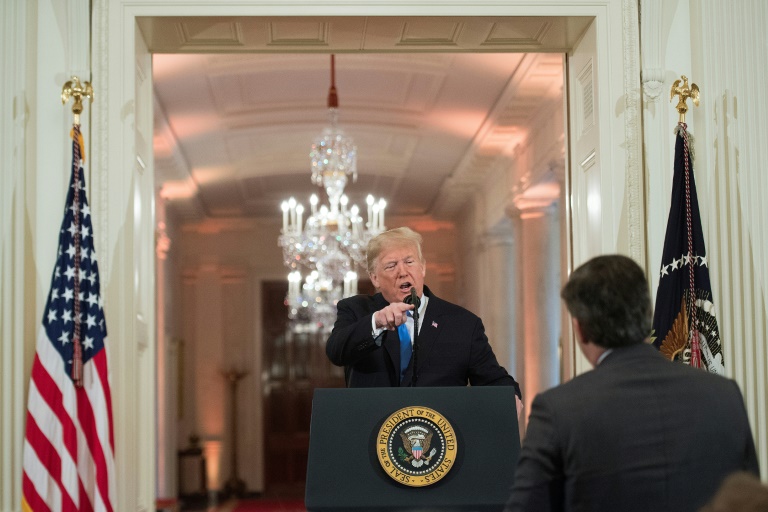 Donald Trump’s inner circle piled in Monday on the US news media, which was plunged into soul-searching over coverage of a two-year probe that failed to show collusion between the president’s 2016 campaign and Russia.

With America’s political landscape reset by the bombshell findings, some continued to defend aggressive reporting of a story still unfolding — but other observers warned a “reckoning” was in store over potentially biased coverage.

The White House wasted little time in sharpening its attacks.

“I think Democrats and the liberal media owe the president, and they owe the American people an apology,” Trump’s spokeswoman Sarah Sanders charged on NBC, echoing similar demands from the president’s sons, Donald Jr and Eric.

But well beyond the Trump camp, there was an acknowledgement that the summary of Robert Mueller’s conclusions released Sunday risked badly damaging the credibility of many news outlets in the eyes of the public.

“It’s official: Russiagate is this generation’s WMD,” ran the headline of a damning analysis by Rolling Stone editor and author Matt Taibbi — alluding to flawed coverage of Saddam Hussein’s alleged weapons of mass destruction arsenal in the run-up to the Iraq war.

Taibbi called the special counsel’s findings a “death-blow for the reputation of the American news media.”

“Nothing Trump is accused of from now on by the press will be believed by huge chunks of the population,” he wrote.

Glenn Greenwald, co-founder of The Intercept, argued cable news outlets in particular need to face up to errors of judgment.

“Check every MSNBC personality, CNN law ‘expert,’ liberal-centrist outlets and #Resistance scam artist and see if you see even an iota of self-reflection, humility or admission of massive error,” Greenwald said on Twitter.

“If there’s no media reckoning for what they did, don’t ever complain again when people attack the media as ‘Fake News.'”

‘No time to retreat’

Many media analysts were more nuanced, arguing it was too soon to make judgments on coverage of the Russia probe based on Attorney General Bill Barr’s letter to Congress summarizing Mueller’s still-secret report.

“I don’t think the media can be charged with being unfair to Donald Trump,” said Stephen Ward, a media ethicist and former director of the University of Wisconsin’s Center for Journalism Ethics.

“With a president so aggressive and so challenging the constitution, the media had to report on him.”

Instead of being cowed, Ward argued media outlets should do their job to get the full report to the public.

“They’ve got to get their hands on a copy and publish it immediately,” he said.

Washington Post media writer Margaret Sullivan said media “should be proud” of its coverage, arguing “this is no time to retreat.”

“American citizens would have been far worse off if skilled reporters hadn’t dug into the connections between Trump’s associates — up to and including his son Don Jr — and Russians,” Sullivan wrote.

“I don’t see how anyone could say this was overhyped,” echoed Northeastern University journalism professor Dan Kennedy.

But Kennedy conceded there were legitimate questions over the coverage of outlets such as CNN and MSNBC.

“I think when we look to what’s bad in the media, it’s natural to look to cable news, which has to sell hours of air time with talk and speculation,” Kennedy said.

Donald Trump Jr set the tone for the counterattack, assailing “more than 2 years of non-stop conspiracy theories from CNN, MSNBC, BuzzFeed and the rest of the mainstream media.”

His brother Eric chimed in, tweeting: “How about a simple apology from the #MSM for the hell everyone has been put through for the past two + years?”

Visibly emboldened by the turn of the events, the White House sent a memo out to television producers urging them to “employ basic journalistic standards” when booking six high-profile Trump critics who, it said, had “made outlandish, false claims” on air.

Deborah Potter, a former CBS News correspondent who now runs media and ethics training programs, said much cable coverage was “based on speculation, because there were zero leaks from Mueller.”

She also stressed that “many responsible news organizations were giving the correct impression” of where the probe was headed.

But Potter warned the heightened scrutiny triggered by Mueller’s findings would make it harder for the sector to regain the public’s trust, badly eroded in recent years.

“We’ve seen a rebound in general trust in the media, but the partisan divide is as deep as ever,” Potter said.

“Republicans distrust the media by a wide margin and that is a symbol of where things stand, and troubling for democracy.”

US on edge for Russia probe findings on Trump