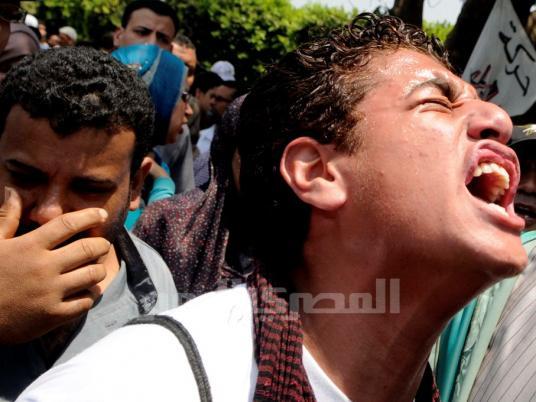 A human rights organization is accusing authorities of detaining more than 300 children during protests last year and trying minors before regular courts instead of family courts, in defiance of the law.

Human Rights Watch said in a statement Tuesday the children have been "denied their rights to counsel and notification of their families." The New-York based organization "found strong evidence that police and military officers beat many of the children and in some cases subjected them to treatment amounting to torture." It quoted some children as saying that they were subjected to electric shocks and beaten with rifle butts.

The organization pointed to the Egyptian government's pledge to end all forms of human rights violations, especially the beating and torture of children.

“If the government wants a real break with the past, it should make it a top priority to investigate the abuse of children at security officials’ hands and prosecute the officials responsible," Priyanka Motaparthy, an HRW children’s rights researcher, said in the statement.

The report, however, said President Mohamed Morsy had taken a number of positive steps, including granting amnesty for crimes linked to the 25 January revolution, a decision the organization said should end prosecution of many detained children. It also recommended that cases involving child abuse should be given priority in investigations, and that officers involved in torturing or mistreating children should be prosecuted.

HRW said authorities had also detained more than 130 children during protests against an amateur anti-Islam film outside the US Embassy in Cairo in September. The organization said the detention of children has continued under Morsy, extending the police violations seen under the previous regime.