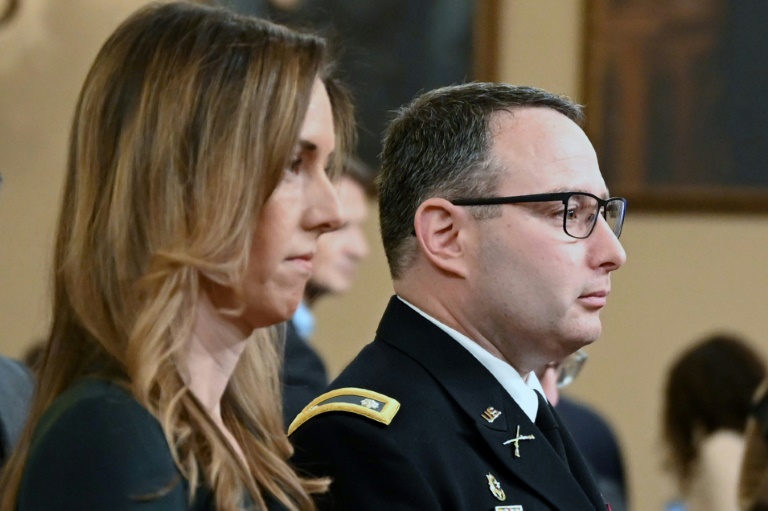 A US Army officer and key impeachment witness saw his loyalty called into question by Republicans on Tuesday, as he testified that President Donald Trump made inappropriate demands on his Ukrainian counterpart for dirt on rival Democrats.

Straining to fight back on abuse-of-power allegations against Trump, Republicans in Congress took aim at Lieutenant Colonel Alexander Vindman, a respected member of the White House National Security Council, suggesting the Kiev-born immigrant’s allegiance is not to the United States and so his testimony is dubious.

Testifying in the second week of televised impeachment hearings, Vindman steadfastly defended his patriotism, saying he had reported alarming pressure by Trump for Ukraine to investigate potential 2020 rival Joe Biden “out of a sense of duty.”

Other witnesses before the House Intelligence Committee supported Vindman’s account that Trump and his envoys held up aid to Ukraine to pressure President Volodymyr Zelensky to help the US leader’s re-election chances, which Democrats say is a gross and impeachable abuse of power.

“It is improper for the president of the United States to demand a foreign government investigate a US citizen and a political opponent,” Vindman told the hearing.

He called Trump’s July 25 phone call with Zelensky — seeking a “favor” to investigate Biden as well as vague claims of Ukraine support for US Democrats in 2016 — “inappropriate,” “improper” and a “partisan play.”

“Frankly I couldn’t believe what I was hearing,” Vindman said of the phone call. “There was an element of shock.”

In nearly more than seven hours of testimony, four witnesses described the months-long push for the Ukraine investigations by Trump and aides, particularly his personal lawyer Rudy Giuliani and Gordon Sondland, the US Ambassador to the European Union.

Sitting next to Vindman, Jennifer Williams, a foreign policy advisor to Vice President Mike Pence, said she too had doubts about the July 25 phone call, which they both monitored from a separate room.

She said the call was “unusual” in the way Trump raised the investigations.

But both assigned more blame to an “irregular” diplomatic track in the hands of Giuliani and Sondland, while not attributing the policy directly to Trump.

Volker also underscored repeatedly that Trump’s allegations Biden may have acted corruptly in Ukraine — Biden’s son served on the board of a controversial energy company Bursima — were “not credible”.

As the damaging testimony piled up, Republicans turned to character assassination to undermine Vindman, so far one of the most potent witnesses in the impeachment investigation.

The White House published tweets questioning Vindman’s judgment — even as he continues to serve on the president’s National Security Council.

Trump branded the inquiry a “kangaroo court,” denying he ever had face-to-face contact with Vindman. “I never saw the man,” Trump said.

And the Republican counsel appeared to question his loyalty by repeatedly asking how he was invited three times to become Ukraine’s minister of defense — offers Vindman called “comical” and said he “immediately dismissed.”

“Do you have any reason why he asked you to do that?” counsel Stephen Castor persisted, asking whether it was a high honor to have been asked, and whether Vindman kept the “door open” to the offer.

Vindman, dressed in military uniform decorated with his Purple Heart and other commendations, called the attacks on fellow public servants “reprehensible.”

Vindman moved to America as a child, and he movingly addressed his father during his testimony, saying he “made the right decision 40 years ago to leave the Soviet Union” and seek a better life for his family in the United States.

“Do not worry, I will be fine for telling the truth,” he said.

Democrats said the Republican line of questioning was a smear of Vindman’s immigrant heritage.

In a surprise move, Trump said Monday he might himself testify in the probe — although a live appearance is unlikely, given the high legal risks.

Nine officials in total are set to appear this week, including, on Wednesday, Sondland, who other witnesses indicated had direct communications with Trump about pressuring Ukraine.

Trump’s impeachment by the Democratic-controlled House would place him on trial in the Senate, where a Republican majority could protect him from removal.

Trump under pressure in 2nd week of impeachment hearings