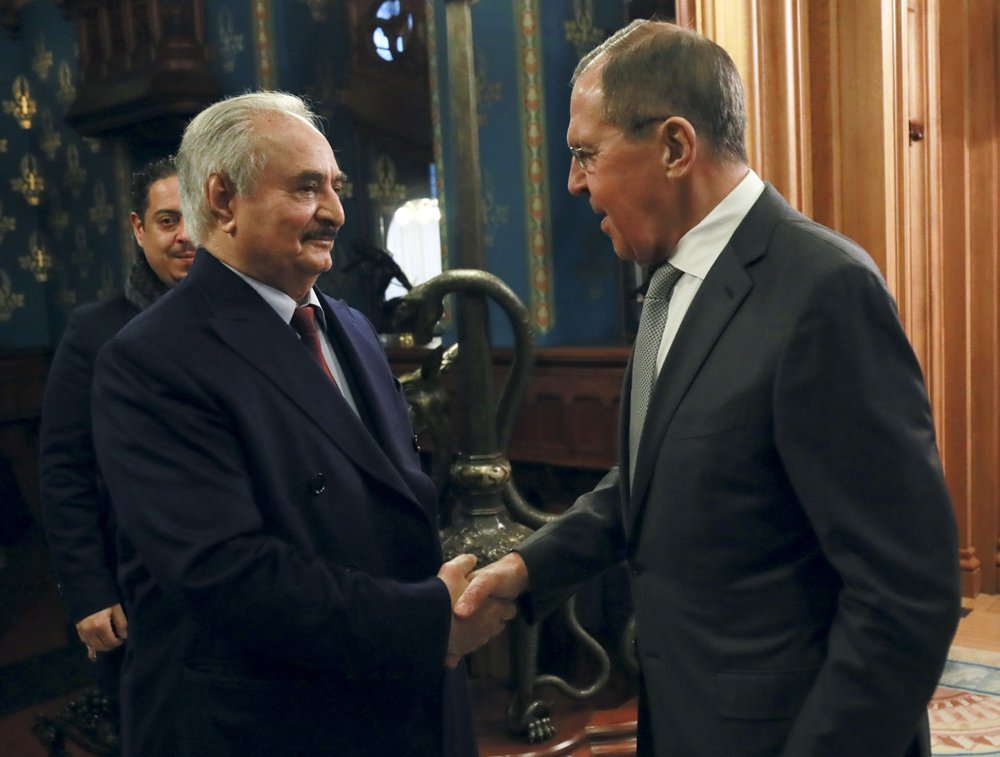 MOSCOW (AP) — Russia sought Tuesday to downplay the collapse of talks that sought to secure a cease-fire in Libya after the country’s rival leaders left Moscow without reaching an agreement, an outcome that cast a shadow on an upcoming Libya summit hosted by Germany.

Russia and Turkey proposed a cease-fire last week in hopes of bringing an end to the north African country’s long-running civil war. Fayez Sarraj, the head of Libya’s U.N.-recognized government in Tripoli, and his rival, Gen. Khalifa Haftar, came to Moscow on Monday for talks with Russian and Turkish diplomats and military officials.

The talks lasted about seven hours, and Sarraj and Haftar didn’t meet directly.

They considered a draft document spelling out details of a truce proposed jointly by Russia and Turkey that began Sunday. Sarraj signed the draft before departing, while Haftar requested more time to consider it and then left Moscow without signing the document.

German Chancellor Angela Merkel’s office said Tuesday it was inviting both Sarraj and Haftar to the summit scheduled for Sunday in Berlin.

In Ankara, Turkish President Recep Tayyip Erdogan vowed to teach Haftar “the lesson he deserves” if attacks on the Tripoli government continued.

Addressing his ruling party’s legislators, Erdogan praised Sarraj, saying he had displayed “an extremely constructive and compromising” stance during the talks in Moscow.

Erdogan added that it was now up to Russian President Vladimir Putin to convince Haftar to agree to the cease-fire proposal.

“The coup-plotting Haftar first said ‘yes’ but then fled Moscow,” Erdogan said. “We have completed our duty. The rest is the duty of Mr. Putin and his team.”

“We all work in the same direction and urge all the sides (of the conflict) in Libya to negotiate instead of trying to sort things out violently,” Lavrov said Tuesday in Sri Lanka.

Russia’s Defense Ministry put out a statement saying that Haftar could still sign the proposed draft, but he needed some extra time to discuss it with his associates.

“Marshal Haftar had a positive view of the final statement, but requested two days to discuss the document with the tribal leaders before signing it,” it said.

The ministry charged that during the Moscow talks “the warring sides agreed in principle that the cease-fire should be supported and extended indefinitely to help create a more favorable atmosphere for holding a conference on Libya in Berlin.”

Merkel visited Moscow on Saturday to discuss Libya with Putin, and they had a phone call Monday in which the Russian leader briefed her on the results of the talks in Moscow.

German Foreign Minister Heiko Maas said he was optimistic of reaching an agreement at the Berlin conference. He added that negotiators have agreed on the text for an agreement with all sides, German news agency dpa reported.

Maas said the aim of the agreement would be to end hostilities and put in place a U.N.-led political process.

He noted that the Russian and Turkish-led negotiations “are certainly helpful, but the ‘Berlin process’ goes well beyond that,” aiming to cut outside military support, bring about an arms embargo and also a cease-fire.

The truce brokered by Russia and Turkey marked the first break in fighting in months. There were immediate reports of violations by both sides, however, raising concerns it might not hold.

Libya plunged into turmoil after the 2011 civil war that ousted and killed long-time dictator Muammar Gadhafi. Various foreign players back Libya’s rival governments, and they have recently been stepping up their involvement in the oil-rich nation’s conflict.

Haftar is supported by France, Russia and key Arab countries, including Egypt, the United Arab Emirates and Saudi Arabia.

Turkey, Italy and Qatar support the Tripoli government, which has faced an offensive by Haftar’s forces that have besieged the capital since last April.

On his way back from Moscow, Sarraj made a stop-over in Istanbul where he met with the U.S. Ambassador to Turkey, David Satterfield. The U.S. Embassy said they discussed “issues of mutual interest.”

Russia has maintained contacts with both conflicting parties in Libya, but the government in Tripoli has recently charged that Russian military contractors were fighting alongside Haftar.

Turkey, in its turn, has sent it military personnel to Libya to support Sarraj’s government.

The joint Russia-Turkey mediation effort in Libya follows the deals they struck to coordinate their action in Syria, where Moscow has shored up President Bashar Assad’s government and Ankara has backed his foes.

Both sides accuse each other of violating ceasefire in Libya