Saudi Arabia executed Mustafa al-Darwish on Tuesday for crimes that, according to rights groups, he committed while still a minor. The execution was confirmed by the Saudi state press agency.

Al-Darwish was found guilty on several charges, including meeting with others involved in riots in 2011 and 2012, “participation in armed rebellion,” “sowing discord,” and plotting to kill local security forces. He was arrested in 2015 and sentenced to death in March 2018. By late May this year, he had exhausted his legal appeal options. Activists warned that his execution was imminent and depended only on the Saudi king’s signature.

His family in Saudi Arabia said al-Darwish had only attended anti-government protests. Al-Darwish is a member of Saudi Arabia’s marginalized Shiite Muslim majority and there have been regular anti-government protests in the Shiite Muslim-majority region of Qatif. There was a period of more pronounced unrest there between 2011 and 2012 as the so-called Arab Spring protests swept the Middle East.

According to rights groups, the 26-year-old al-Darwish must have been either 17 or 18 at the time of the alleged crimes. Saudi authorities maintain that he was an adult at the time of the offenses, but do not provide precise dates.

Rights groups: Trial was not fair

Al-Darwish’s family said he was tortured into confessing. He later recanted his confession. His family also say that they were not able to contact him and Amnesty International argued that he was not given a fair trial. 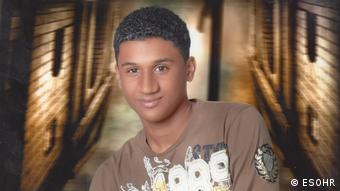 The family said they were not informed of Tuesday’s execution and only heard about it through online media.

“Six years ago, Mustafa was arrested with two of his friends,” a statement issued by al-Darwish’s family on Tuesday said. “The police released him without charge but confiscated his phone. We later found out that there was a photograph on the phone that offended them. Later they called us and told Mustafa to come and collect his phone, but instead of giving it back they detained him … How can they execute a boy because of a photograph on his phone?”

Saudi Arabia is known as a world leader in capital punishment and has conducted several mass executions.

Last year, Saudi Arabia’s King Salman decreed that crimes committed by minors — that is, anyone under 18 — would no longer be punishable by death. Instead the perpetrator would be sentenced to 10 years in jail.

The March 2020 royal decree was never reported by state media nor published in the official gazette as would be normal practice. The state-backed Human Rights Commission also told news agency Reuters in February that the ban would only apply to less serious crimes.

“The execution of Mustafa al-Darwish once again shows that the Kingdom’s claim to have eliminated capital punishment for childhood crimes is not true,” a statement from Reprieve said.

The organization’s director, Maya Foa, called upon European leaders to “make clear that executions for childhood crimes will not be tolerated.”

“The cruelty of this execution, without warning, for the crime of joining protests as a teenager, is the true face of Mohammed Bin Salman’s Saudi Arabia — not the endless empty promises of reform,” Ali al-Dubaisi, who heads the European Saudi Organization for Human Rights, or ESOHR, said.

According to ESOHR data, of the 53 prisoners currently facing potential death sentences, four were convicted of crimes committed when they were younger than 18.