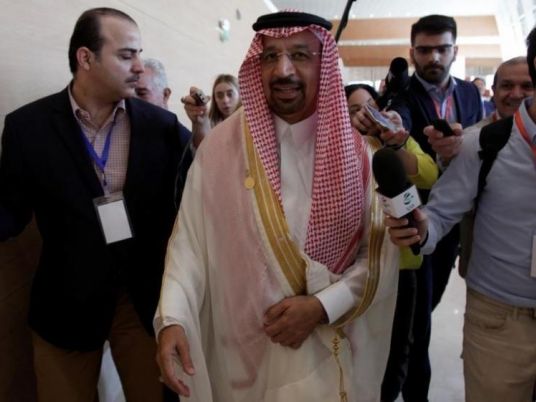 Saudi Arabia's Energy Minister Khalid al-Falih said on Monday that OPEC should not crimp oil supply too tightly and said he was optimistic a global production deal to limit supplies could be reached by November.

Speaking at the World Energy Congress in Istanbul, Falih said OPEC, which agreed a deal to cut production in Algiers last month, needed to behave in a balanced and responsible manner and that he continued to believe in its important role.

"OPEC needs to make sure we don't crimp too tightly and create a shock to the market. We are going to be very responsible," Falih said.

"Prices have dropped too low and that has impacted investment. Many companies and countries are hurting… we don't want to give the market the wrong signal and shock the market's prices," he said.

Falih said he would meet Russian Energy Minister Alexander Novak in Istanbul in the coming days to discuss Russia's reaction to the Algiers agreement, and that a technical committee meeting between OPEC members and non-OPEC countries would take place in two weeks.

OPEC officials are embarking on a flurry of meetings to nail down details of the deal in Algiers, where modest oil output cuts were agreed in the first such deal since 2008.

The chain of meetings, which are starting in Istanbul, signal that unlike in the first half of 2016, the exporting group is more serious now about managing the global supply glut and propping up prices.

"It is time to do something different than we faced in 2014. It is a very gentle hand on the wheel, we are not doing anything dramatic," Falih said. "The difference is that the market forces have shifted significantly between 2014 and now."

He said there was still not total clarity on supply and demand in some areas such as China and North America at the moment and that he hoped the situation would be clearer by the time of OPEC's November meeting.

Citing Novak, Russia's energy ministry said on Friday it expected an output freeze deal could be reached before the OPEC meeting on Nov. 30..

No decision is expected in Istanbul, OPEC sources have said. But the meeting will be a chance for officials to discuss the next step after the Algiers deal, which was agreed after intensive shuttle diplomacy.

Falih said Saudi would be prepared to deal with whatever price may emerge.

"We have economic and fiscal plans to deal with very low (price) scenarios and moderate price scenarios," he said.