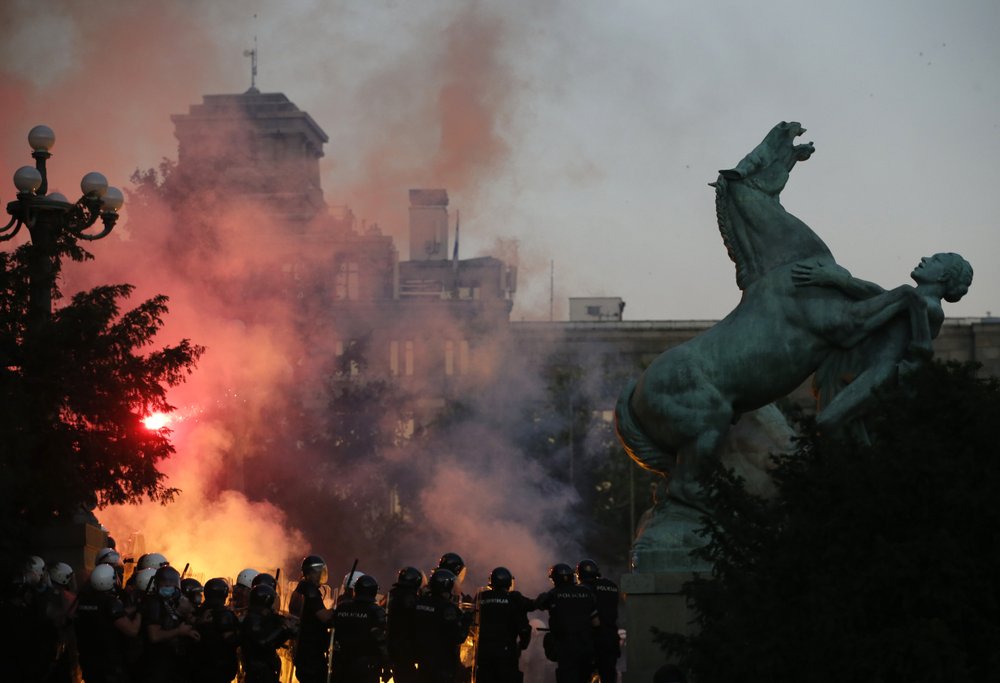 BELGRADE, Serbia (AP) — Serbia’s president said Friday he’s not worried about losing political power amid large protests against his handling of the coronavirus crisis and hard-line rule, but instead expressed his fear about the spread of the virus by the demonstrators.

“It is so irresponsible to call upon people to gather and demonstrate when we are faced with the most horrific numbers of infections from the coronavirus,” President Aleksandar Vucic told reporters during his state visit to France.

“I beg people, please let’s keep our health safe. Nobody is going to take power by force. Power is taken at the elections. You can protest as much as you want when the epidemic is over,” Vucic said.

“If you don’t understand this, and you want to bring some tycoons to power — let me tell you — this is not going to happen.”

After two nights of violent protests and clashes with police, peaceful demonstrations were held in the capital of Belgrade and several other Serbian towns on Thursday. A few people wore face masks.

Defying a ban on mass gatherings passed by the government on Thursday, many protesters wore white T-shirts with the inscription, “Sit Down, Don’t Be Set Up” — referring to widespread reports that the violence the previous nights that played into the government’s hands was staged by far-right groups close to the authorities.

The opposition Alliance for Serbia coalition said in a statement that Vucic’s regime on Thursday apparently “gave hooligans a night off” while he attended a summit in Paris that is focusing on peace talks between Serbia and its breakaway province of Kosovo.

“With the peaceful protests last night, people showed in what kind of a country they want to live,” the statement said. “We had an almost normal day when Vucic was not in town, without him playing around with the protests, the pandemic and our lives.”

Vucic denied that “hooligans,” who were seen beating up the protesters, are under his control, claiming they were brought in by the opposition.

The spontaneous protests started on Tuesday when Vucic announced that Belgrade would be placed under a new three-day lockdown following a second wave of confirmed coronavirus infections.

The protests then mushroomed into wider frustration with Vucic’s increasingly authoritarian rule.

The unrest, considered the most intense since the overthrow of former Serbian strongman Slobodan Milosevic in 2,000, continued although Vucic suspended his decision to enforce a second shutdown.

After initially handling the pandemic relatively well, Vucic and his government have been accused of allowing the crisis to spin out of control in order to hold a June 21 election that tightened his grip on power.

Opponents blame the president for contributing to the large spike in deaths and new cases after he entirely lifted previous very tight lockdown measures. Mass gatherings at soccer and tennis matches and at nightclubs were allowed despite warnings by experts that this could lead to a spike in infections.

Serbian officials denounced the protests as an attempt to overthrow the government and weaken Vucic’s position in the European Union-mediated negotiations on Kosovo, a former province whose 2008 declaration of independence Belgrade doesn’t recognize.

More protests are scheduled for Friday.

Image: Police clashes with protesters in Belgrade, Serbia, on Wednesday, July 8, 2020. On Wednesday, President Aleksandar Vucic backtracked on his plans to reinstate a coronavirus lockdown in Belgrade after thousands protested the move and violently clashed with the police in the capital. (AP Photo/Darko Vojinovic)

Orthodox Easter services hit by virus as many stay home