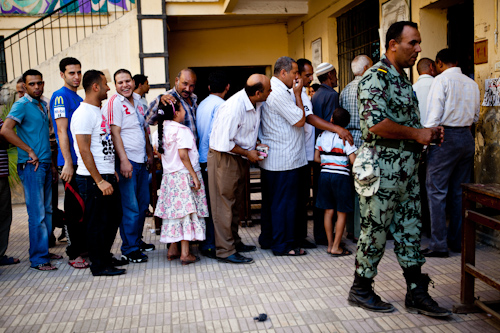 home village in the Nile Delta governorate Sharqiya. He is surrounded by a group of men, all working to mobilize voters.

"We are Shafiq's family. He is our son and many heads of families here spend from their own pockets on campaigning," says Gammal, a schoolteacher who used to be the secretary of the ruling National Democratic Party (NDP) in the village. The party was dissolved by court order last year for "corrupting political life."

Shafiq's grandfather used to be mayor of the village, though the presidential candidate was born in Cairo. He also attended the Military Air Force Academy in the nearby town of Belbeis.

Gammal says he voted for the Muslim Brotherhood in the parliamentary elections "in defiance of the NDP," but after five months in Parliament, the Brotherhood fell short of his expectations. Now, he says, "People would vote for anyone running against the Brotherhood candidate."

However, the village's residents and Shafiq's extended family members remain divided over the two candidates.

As Gammal stands in front of the polling station, he is continuously arguing with supporters of Mohamed Morsy, the Muslim Brotherhood's presidential candidate.

Sayed Salem, a distant cousin of Shafiq, tells Egypt Independent that he voted for Morsy. "There are two options: either Shafiq wins and reinstates the old regime or we try the Brotherhood," he says. For Salem, even the problematic Brotherhood is better than Mubarak's regime. He blames the Supreme Council of the Armed Forces and the media for exaggerating the Brotherhood's weaknesses during the past five months.

Shafiq secured the majority of Sharqiya's votes in the first round of the presidential election, although the Delta governorate is known be a long time stronghold of the Brotherhood and is also Morsy's birthplace. The Brotherhood's Freedom and Justice Party won the majority of Sharqiya seats in the past parliamentary elections, making the fight over the governorate's 3.5 million voters a fierce one.

Many voters blame the decline of the Brotherhood's popularity in Sharqiya on the poor performance of their MPs in dealing with the people's day-to-day problems, accusing them of attempting to control all the state's institutions. The Brotherhood-led Parliament was dissolved last week under orders from the Supreme Constitutional Court.

Although Shafiq is accused by revolutionaries of belonging to Mubarak's regime, especially since many NDP leaders have put their weight behind him, the Brotherhood does not escape the same blame.

"The Brotherhood, not Shafiq, was aiming to reproduce the old regime," says Saeed Hosny whose house in a Sharqiya village is covered by Shafiq posters.

The Brotherhood dominated Parliament and was attempting to take a majority of seats in the committee writing the constitution, as well as the presidency, he says. Hosny, who lives in Qotayefet Mubasher, voted for the Freedom and Justice Party in the parliamentary elections. "I regret it now."

Other people accuse the Brotherhood's MPs of favoring their own members at the expense of the rest of people when it comes to local day-to-day services.

"They only help their own people. They make their party and group members their priority," says Mohamed al-Ayyat, 25. Ayyat told Egypt Independent that he would still vote for Morsy because he is afraid that Shafiq will become a dictator.

Back at Shafiq's campaign headquarters in Ibrahemeyya, Aly Fahmy, the campaign's general coordinator, sits at his desk receiving reports via phone from Gammal and other campaigners across the villages all day to make sure Shafiq is in the lead.

"Send a car to Tarbeya neighborhood right away. Many voters need transportation to the polling station," said Fahmy to one of the campaigners on the phone.

"It's a very fierce competition but we are on top of it," Fahmy says with a broad smile. The wall behind his desk is covered in Shafiq posters.

According to Fahmy, the campaign employed three strategies in their campaigning for Shafiq. First is using cars with megaphones that tour around the villages and neighborhoods to talk about Shafiq's achievements and background. Second, meeting with heads of families and convincing them that Shafiq will secure their interests. Finally, targeting village chiefs and sheikhs who influence the opinion of many voters.

"Many people feel that the state has lost its prestige. The loud voice of protesters took control and Egypt can't be ruled from Tahrir Square," says Fahmy.

On the other hand, those who vote for Morsy in Sharqiya mostly view him as the savior of the revolution.

"Shafiq is the old regime. What was the use of the revolution then? If Shafiq becomes president, it's as if we didn't do anything," said Hoda Shehata rather discretely as she came out of the polling station in order to avoid a clash with the contending groups.

Morsy's campaigners use this same discourse in their campaigning.

"The decision to dissolve Parliament proved that Morsy is the revolution's candidate against the might of the SCAF. Many people are voting for Morsy as a protest," said Mahmoud al-Saadany, Morsy's campaign coordinator in Zagazig, Sharqiya's capital.

Amid the stark polarization of voters, they all believe in their power to define their future regardless of who wins these elections.

"The people and the revolution won't let any president become a tyrant anymore. It's a free democracy now and we can change the president after four years if we don't like him," said Wahid al-Sayed, 43, who voted for Shafiq.

"If Shafiq doesn't achieve the revolution's demands, I will be the first to protest in Tahrir Square"