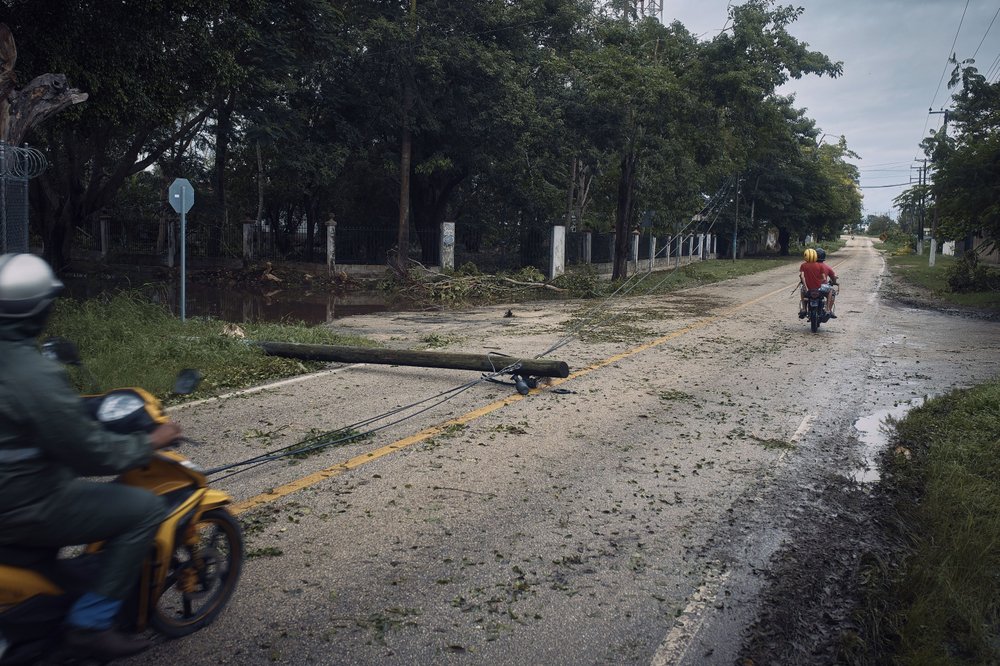 MORGAN CITY, La. (AP) — Louisiana residents still recovering from the devastation of a powerful hurricane less than two months ago braced for another hit as Hurricane Delta steamed north through the Gulf on Thursday after swiping Mexico’s Yucatan Peninsula.

Forecasters warned that the storm could blow ashore Friday with winds of up to 100 mph (160 kph) and a storm surge of up to 11 feet (3.4 meters). They placed most of Louisiana within Delta’s path, including the southwest area of the state around Lake Charles, where Category 4 Hurricane Laura ripped houses from their foundations, peeled off roofs and tore trailers in half on August 27.

Nearly six weeks later, 5,600 people remain in New Orleans hotels because their homes are too damaged to occupy. Trees, roofs and other debris left in Laura’s wake still sit by roadsides waiting for pickup even as forecasters warned that Delta could be a larger than average storm.

“All that debris could become missiles in really strong wind,” said Edwards, who also worried about the “sheer anxiety” the storm could cause already traumatized residents.

“We don’t want a hurricane to hit anywhere, but we know that the area that is least prepared and ready for a storm happens to be southwest Louisiana,” he said.

Edwards said President Donald Trump approved his request to declare a federal emergency, which frees up federal resources. This is the sixth time in the Atlantic hurricane season that people in Louisiana have been forced to flee the state’s barrier islands and sail boats to safe harbor while emergency officials ramp up command centers and consider ordering evacuations.

Hurricane Delta is the 25th named storm of the Atlantic’s unprecedented hurricane season. Delta hit Mexico as a Category 2 hurricane just south of the resort city of Cancun early Wednesday with high winds and heavy rain, cutting power to more than 260,000 customers and forcing tourists into storm shelters. No deaths or injuries were reported.

Many residents said they have had enough.

“This has to be the worst year that I have experienced,” said Andrius Vitto, 42, a food truck owner from Grammercy who helped feed hungry evacuees after Laura. After learning this week that his native New Iberia, just to the east of Laura’s worst devastation, was in Hurricane Delta’s sights, “the hair rolled up on my arms,” he said. “To see all this happening in one year — you know with the wildfires, with the hurricanes, the rain, all the other stuff in the news — COVID — It’s mind-boggling.”

In Sulphur, across the Calcasieu River from Lake Charles, Ben Reynolds was deciding Wednesday whether to leave or stay. He had to use a generator for power for a week after Hurricane Laura.

While New Orleans has been mostly spared by the weather and found itself outside Delta’s cone Wednesday, constant vigilance and months as a COVID-19 hot spot have strained a vulnerable city still scarred by memories of 2005′s Hurricane Katrina. Delta’s shifting forecast track likely meant no need for a major evacuation, but the city’s emergency officials were on alert.

Tropical Storm Marco looked like it might deliver the first half of a hurricane double-blow with Laura, but nearly dissipated before hitting the state near the mouth of the Mississippi River on August 24.

There are nearly eight weeks of hurricane season left, although forecasters at the National Weather Service office in New Orleans noted in a discussion Tuesday of this week’s forecast that outside of Delta, the skies above the Gulf of Mexico look calm.

“Not seeing any signs of any additional tropical weather in the extended which is OK with us because we are SO DONE with Hurricane Season 2020,” they wrote.

By STACEY PLAISANCE and REBECCA SANTANA

Motorcyclists ride past a power post toppled by Hurricane Delta in Tizimin, Mexico, Wednesday, October 7, 2020. Delta made landfall Wednesday just south of the Mexican resort of Cancun as a Category 2 storm, downing trees and knocking out power to some resorts along the northeastern coast of the Yucatan Peninsula. (AP Photo/Andres Kudacki)