The nephew of Singapore’s prime minister, who faces contempt of court proceedings for comments he made suggesting the city-state’s courts were not independent, said he would not be returning to Singapore.

The office of Singapore’s attorney general said on Friday it would begin contempt of court proceedings against Li Shengwu, a US-based academic, over Facebook posts he made on July 15. The legal move is the latest twist in a family feud over the fate of the house left by the late Singapore founding father Lee Kwan Yew that gripped the nation last month.

In his post, Li, nephew of Prime Minister Lee Hsien Loong and a son of Lee’s brother, Lee Hsien Yang, described the Singapore government as “litigious” and its courts as “pliant”.

Li, 32, is currently a junior fellow at Harvard University and told Reuters on Saturday from the United States he expected to start an assistant professor position with the university in the fall of 2018.

He said he would defend himself through legal representation in Singapore but would not return to the country.

“I have no intention of going back to Singapore. I have a happy life and a fulfilling job in the U.S.,” he said in an interview.

Li said the prosecution against him was “politically motivated”.

“The Attorney General’s Chambers explicitly mentioned both my family relationships and recent political events in their cease and desist letter,” said Li.

“I would like to spend my time doing research, but have somehow been swept into my uncle Lee Hsien Loong’s personal political vendetta.”

Spokespeople for the Prime Minister’s Office were not immediately available for comment on Saturday.

In a statement on Friday, the attorney general’s chambers said it had previously instructed Li to remove the post and issue a letter of apology acknowledging that his comments about the judiciary were baseless.

It said since Li had failed to meet those requirements by the stipulated deadline of 0900 GMT, Friday, which had been pushed back from July 28 at Li’s request, it had filed the contempt proceedings in High Court.

Earlier on Friday, Li said on Facebook he had amended his original July 15 post to clarify any misunderstandings. However, he said he did not believe the post was in contempt of court.

Li’s July 15 post was shared on a privacy setting that allows content to only be viewed by his Facebook friends. He said on Friday the intent of that post was to convey the “international media were restricted in their ability to report” on a recent feud between Prime Minister Lee and his siblings “due to the litigious nature” of the government.

“It is not my intent to attack the Singapore judiciary or to undermine public confidence in the administration of justice,” he said.

The public spat between the Lee siblings, children of Lee Kuan Yew, flared in June over the future of the family home, in which Lee Kuan Yew, who died at the age of 91 in 2015, lived for most of his life.

Lee Hsien Yang and sister Lee Wei Ling accused their elder brother of abusing power to try to save the house as a historic monument in defiance of his father’s wishes. That prompted the prime minister to call an extraordinary special sitting of parliament in July to “clear the air” over an issue that some people say has tarnished Singapore’s image. 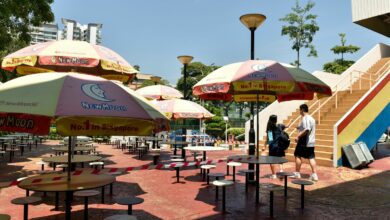