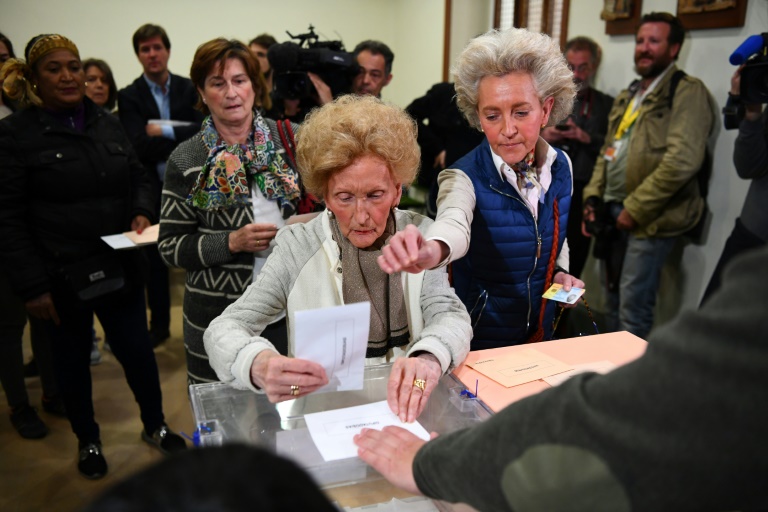 Spain voted Sunday in an uncertain snap general election marked by a resurgence of the far-right after more than four decades on the outer margins of politics.

Opinion polls give outgoing socialist premier Pedro Sanchez a win but without the necessary majority to govern alone, meaning he will have to seek alliances in a political environment that has soured since Catalonia’s failed secession bid.

The most significant new development of these elections is the emergence of far-right party Vox, which burst onto the scene in December regional polls in southern Andalusia and looks set to make its first-ever entrance into the national parliament.

Polls predict it could take more than 10 percent of the votes in a country that had no far-right party to speak of since the death of dictator Francisco Franco in 1975, in what is likely to cause further concern in Europe.

After a tense campaign, voter turnout as of 2 pm (1200 GMT) stood at 41.48 percent, up from 36.87 percent in the preceding polls in 2016, election authorities said. Turnout was notably higher in Catalonia, rising nearly 11 percentage points.

Retired construction worker Carlos Gonzalez said he had cast his ballot for the Socialists because they were a “moderate option”.

Vox “is going backwards, to the past. It’s not the future because the future is a united Europe,” he told AFP at a Madrid polling station.

Sanchez, who took power in June after ousting conservative prime minister Mariano Rajoy in a no-confidence vote, has warned against Spain replicating what happened in Finland’s elections two weeks ago.

There, the far-right Finns Party came second, closely tailing the leftist Social Democrats, after polls initially predicted it would end up in fifth position.

In Spain, polls also forecast that Vox, with its ultra-nationalist rhetoric that advocates the “defence of the Spanish nation to the end,” will come in fifth place.

But analysts believe it could do better, saying there may be many “hidden” Vox supporters who lie when asked by pollsters who they will be voting for.

“There is a real, true risk,” Sanchez said this week, warning that a right-wing government supported by Vox could emerge in Spain after the elections, even if opinion polls say this is unlikely.

Founded by a former member of the conservative Popular Party (PP), with a strong stance against feminism and illegal immigration, Vox has risen thanks to its hard line against separatists in Catalonia.

The region in northeastern Spain was the scene of a secession attempt in 2017 that sparked the country’s biggest crisis in decades and caused major concern in Europe.

Since then, the crisis has continued to cast a pall over Spanish politics.

Sanchez was forced to call Sunday’s early elections after Catalan pro-independence lawmakers in the national parliament, angered at the trial of their leaders in Madrid, refused to give him the support he needed for his 2019 budget.

Right-wing parties have for their part lambasted Sanchez, at the head of a minority government, for his attempts to negotiate with Catalan separatists who still govern the region, accusing him of being a traitor.

“I hope the right wins and restores a bit of order here,” said Teresa Diaz, a 63-year-old pensioner, after casting her ballot in Hospitalet de Llobregat, near Barcelona, the capital of Catalonia.

With no party expected to get anywhere near an absolute majority in what will be the third elections in three-and-a-half years, Spain’s political landscape looks set to continue to be fragmented.

If, as opinion polls predict, Sanchez wins without a majority, he will have to forge alliances with far-left Podemos — as he did over the past 10 months — but also possibly smaller groupings like Catalan separatist parties.

He would rather not have to do that, given right-wing parties’ accusations that he cosied up with the “enemies of Spain” during his time in government.

A possible alliance with Ciudadanos has not been ruled out, even if the center-right party’s leader Albert Rivera has made “chasing” the socialists from power a “national urgency”.