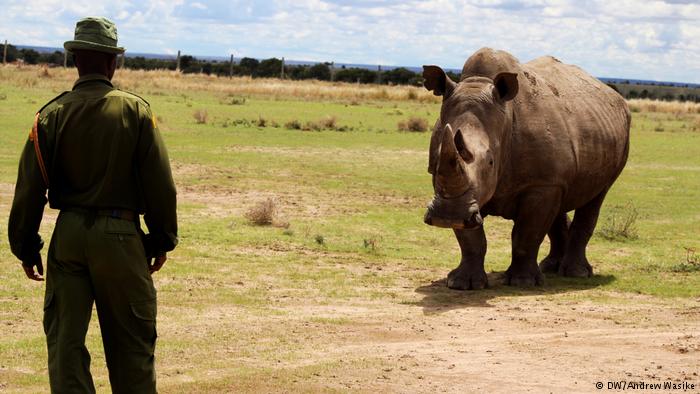 The condition of 45-year-old Sudan was said to have worsened rapidly in the last 24 hours, according to a statement from the Ol Pejeta Conservancy in central Kenya on Tuesday.

Sudan was “being treated for age-related complications that led to degenerative changes in muscles and bones combined with extensive skin wounds.”

Veterinary experts took the decision to euthanize the animal, which by then was unable to stand, on Monday.

Sudan’s death means that only two females of the subspecies remain — his daughter Najin, and granddaughter Fatu. Both live at Ol Peteja.

Sudan had only lived so long because he was kept under round-the-clock armed protection from poachers, the charity Helping Rhinos said on its website. Rhinos are poached primarily for their horns, which are sawn from the heads of dead or fatally injured animals. They are used in traditional Chinese medicine and for dagger handles in Yemen.

“Sudan’s death is one we should wish for all rhinos — a natural death and not one resulting from a bloody mess of a face where his horn once stood so proudly,” said Helping Rhinos, which also posted a video tribute.

Given his status as the last male of his kind, Sudan had become something of a celebrity, being listed last year  on the Tinder dating app as “The Most Eligible Bachelor in the world.”

“He was a great ambassador for his species and will be remembered for the work he did to raise awareness globally of the plight facing not only rhinos, but also the many thousands of other species facing extinction as a result of unsustainable human activity,” said Ol Pejeta CEO Richard Vigne. “One day, his demise will hopefully be seen as a seminal moment for conservationists worldwide.”

Sudan had “significantly contributed to the survival of his species as he sired two females,” the conservancy said. In addition, genetic material was collected before his death, providing hope that advanced cellular technologies might be used to further the species.

Such a development would involve in-vitro fertilizationusing eggs from the two remaining females, stored northern white rhino semen from Sudan and other males, and surrogate southern white rhino females.

A poaching crisis in the 1970s and 1980s wiped out northern white rhino populations in Uganda, the Central African Republic, Sudan and Chad. The last wild population was in the Democratic Republic of Congo, but that succumbed to fighting in the region in the 1990s and early 2000s.

Sudan and other northern white rhino escaped poaching by being moved to the Dvur Kralove Zoo in what was then Czechoslovakia in the 1970s. They were moved back to Africa in 2009, in the hope that the move would give them more favorable breeding conditions.