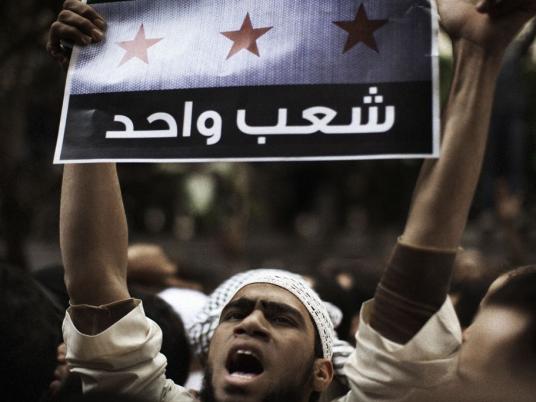 Dozens of countries are attending the "Friends of the Syrian People" conference in Istanbul to try to further isolate Syrian President Bashar Assad, unite the Syrian opposition and bring aid to embattled civilians.

A front-page editorial in the official Al-Baath newspaper called the conference a "regional and international scramble to search for ways to kill more Syrians, sabotage their society and state and move toward the broad objective of weakening Syria."

Damascus has consistently dismissed the country's yearlong uprising as a foreign-engineered conspiracy.

US Secretary of State Hillary Rodham Clinton is attending the conference, as are leaders from Europe, Turkey and Arab countries. All have emerged as harsh critics of Assad's crackdown on dissent.

But reflecting international divisions over the Syria crisis, China and Russia did not attend. The two countries have twice protected the Assad regime from censure by the UN Security Council, fearing such a step could lead to foreign military intervention.

Iran, a close Syrian ally, was not invited.

Syria's uprising began in March 2011 with peaceful protests calling for political reforms. Dissent spread as Assad's forces deployed tanks, snipers and thugs to try to quash it, and many in the opposition have taken up arms to defend themselves and attack government troops.

The United Nations says more than 9,000 people have been killed.

Former UN Secretary General Kofi Annan is pushing to end the violence with a six-point plan that calls on the government to immediately pull its forces out of cities and towns and abide by a two-hour halt in fighting every day to allow humanitarian access and medical evacuations.

The plans also calls for a more comprehensive cease-fire so all sides can talk about a political solution.

Syria has said it agrees to the plan but has dismissed what it actually requires Damascus to do.

Foreign Ministry spokesman Jihad Makdessi has said the government would not withdraw its force from towns and cities engulfed by unrest before life returns to normal there.

Leaders of Syria's scattered opposition have also rejected dialogue with the regime, accusing it of stalling for time and saying it has killed too many people to be considered serious about peace.