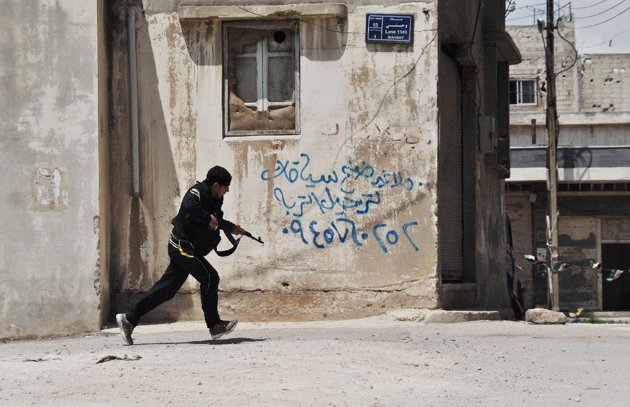 BEIRUT- Syria's main opposition group lashed out Monday at the execution a day earlier of a 15-year-old child at the hands of unidentified Islamist gunmen who accused him of blasphemy.

"The National Coalition condemns every act that violates the Syrian people's values and the principles of the (rebel) Free Syrian Army," the group said in a statement.

"Anyone who breaches treaties and international conventions, and commits any war crimes will stand trial, regardless of who they are," the Coalition added.

The Syrian Observatory for Human Rights reported the execution of a 15-year-old in front of his family in the northern province of Aleppo on Sunday at the hands of extremists who accused the child of blasphemy.

The Observatory condemned the execution as "criminal and a gift to the regime of Syrian President Bashar al-Assad".

On Monday, a network of citizen journalists in Aleppo distributed a video interview with the child's parents.

The boy's mother is shown wearing a white veil, wailing as she describes her loss.

"They killed him in front of me… May God take revenge on them," she said.

"I asked them why they killed him… We are with neither side (in Syria's conflict). We just look after ourselves… Why did you kill my son? Is he a terrorist?"

Activists have frequently reported rights violations in areas such as Aleppo, large swathes of which have fallen out of regime hands and into a security vacuum.