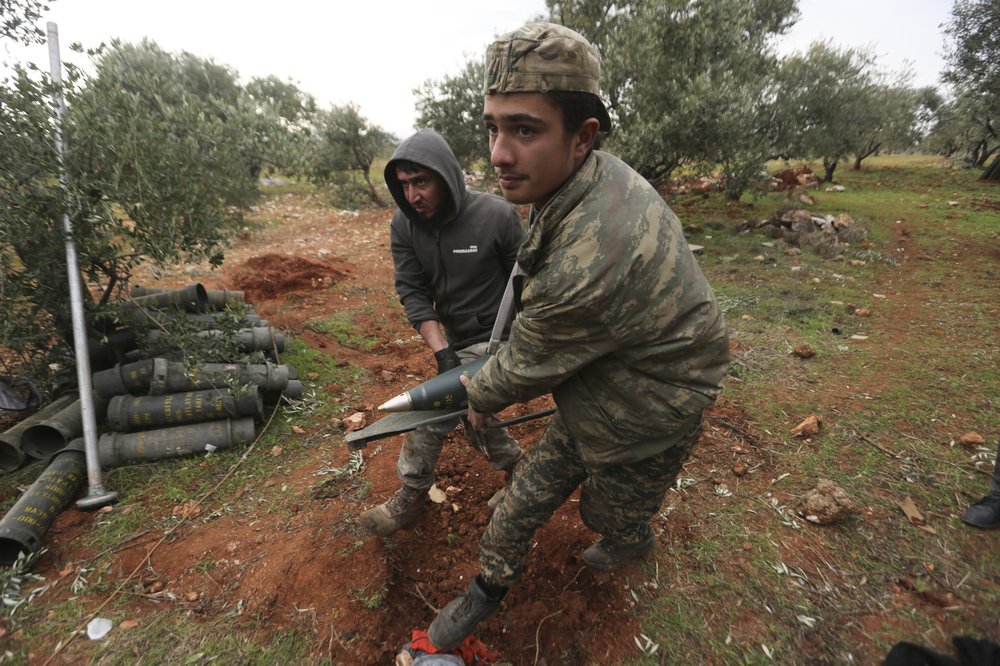 ANKARA, Turkey (AP) — An airstrike on a rebel-held northwestern Syrian city struck a school Tuesday, killing three people, Syrian opposition activists said, as government forces moved forward in their offensive toward a town considered a symbol of the uprising against President Bashar Assad.

The violence came as Turkey’s president announced that a Russian delegation would arrive the following day to resume talks aimed at easing tensions in the northwest Idlib region. The area is the country’s last rebel-controlled stronghold and the Syrian government’s military campaign there, backed by Russia, has created a humanitarian catastrophe with nearly one million people displaced from their homes since Dec. 1.

Most of them are now crowding areas close to the border with Turkey, living in camps, shelters, abandoned homes and in open fields. It is the largest single displacement of Syria’s war, now in its ninth year.

Turkish President Recep Tayyip Erdogan said no consensus was reached for a four-way meeting next month between the leaders of France, Germany, Russia and Turkey meant to address the crisis. He added, however, that Russia’s Vladimir Putin may still come to Turkey next week for a bilateral meeting. Moscow has so far not confirmed a March 5 visit by the Russian president to Turkey.

Tensions have been running high between Turkey and Russia, which support opposing sides of the war in Syria. The Syrian government offensive has shattered a fragile cease-fire agreement that Turkey and Russia reached in 2018 and Turkey has threatened military action unless Syrian forces retreat to positions they held before the advance by the end of February.

“Russia supports Syria at the highest level,” Erdogan told reporters before departing for a visit to Azerbaijan. “Even if they deny it, we have evidence. We are forced to be in this fight.”

Turkish officials had reported small progress in two previous rounds of Turkey-Russia meetings but said the results were not satisfactory.

Turkey had set up a dozen observation posts as part of the 2018 agreement, many of which are now behind Syrian government lines. Ankara also sent thousands of additional troops into Idlib in recent weeks and has frequently engaged in military exchanges with Syrian troops.

At least 16 Turkish soldiers were killed in February clashes during the Syrian government’s push on the last rebel stronghold.

In the provincial capital of Idlib that carries the same name, a school was struck with a cluster bomb-filled rocket, killing two girls and a teacher, according to the Britain-based Syrian Observatory for Human Rights. Idlib-based opposition activist Hadi Abdullah confirmed that three people were killed in Idlib.

To the south of Nairab, Syrian troops captured two new villages raising to 10 the number of areas captured in the province since Monday, according to state media.

The capture of Maaret Tamater and Maaret Seen brings government forces closer to Kafranbel, a major opposition-held town that gained attention in the early years of the Syrian conflict during weekly anti-government protests because of humorous English-language banners carried by protesters.

The banners were initiated by anti-government journalist Raed Fares who was shot dead in the town along with his friend Hammoud al-Juneid in November 2018. Fares was a harsh critic of Islamic militants that control much of Idlib.