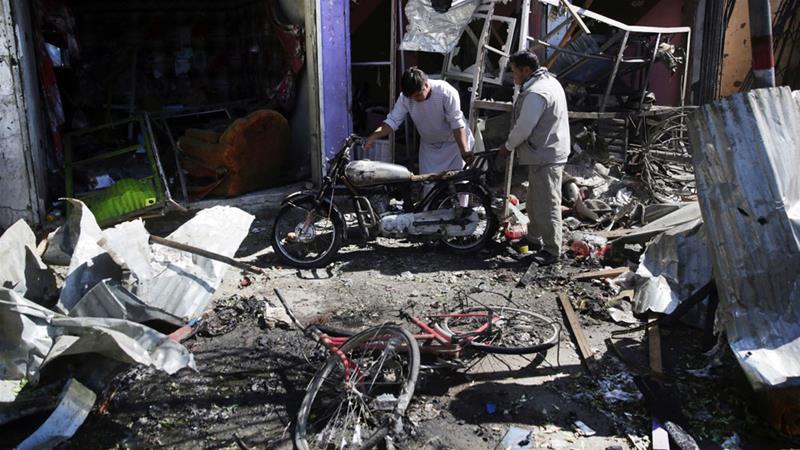 A Taliban suicide attacker detonated a car bomb in the western part of Kabul on Monday, killing up to 35 people and wounding more than 40, government officials said, in one of the worst attacks in the Afghan capital in recent weeks.

Police cordoned off the area, located near the house of the deputy government Chief Executive Mohammad Mohaqiq in a part of the city where many of the mainly Shia Hazara community live.

Monday’s suicide bombing, which targeted government personnel, continued the unrelenting violence that has killed more than 1,700 civilians in Afghanistan so far this year.

The Taliban, which is battling the Western-backed government and a NATO-led coalition for control of Afghanistan, has launched a wave of attacks around the country in recent days, sparking fighting in more than half a dozen provinces.

“I was in my shop when suddenly I heard a terrible sound and as a result all of my shop windows shattered,” said Ali Ahmed, a resident in the area of Monday’s blast.

Acting Interior Ministry spokesman Najib Danish said at least 24 people had been killed and 40 wounded but the casualty toll could rise further.

Another senior official, speaking on condition of anonymity because he was not authorized to talk about the incident with the media, said the toll stood at 35 killed. That was in line with a claim on Twitter by Taliban spokesman Zabihullah Mujahid, who said 37 “intelligence workers” had been killed.

Mujahid said in a tweet claiming responsibility for the attack the target had been two buses that had been under surveillance for two months.

Government security forces said a small bus owned by the Ministry of Mines had been destroyed in the blast but the National Directorate for Security, the main intelligence agency, said none of its personnel had been hit.

Three civilian vehicles and 15 shops were destroyed or damaged in the blast, the Interior Ministry said in a statement.

At least 1,662 civilians had already been killed in Afghanistan in the first half of the year.

Kabul has accounted for at least 20 percent of all civilian casualties this year, including at least 150 people killed in a massive truck bomb attack at the end of May, according to United Nations figures.

The Islamic State group claimed an attack on a mosque in the capital two weeks ago that killed at least four people.

On Sunday, dozens of Afghan troops were under siege after Taliban fighters overran a district in northern Faryab province, a spokesman for the provincial police said.

There was also fighting in Baghlan, Badakhshan, and Kunduz provinces in Afghanistan’s north, and Kandahar, Helmand, and Uruzgan in the south, according to officials.

The resurgence of violence also coincides with the US administration weighing up its strategic options for Afghanistan, including the possibility of sending more troops to bolster the NATO-led training and advisory mission already helping Afghan forces.