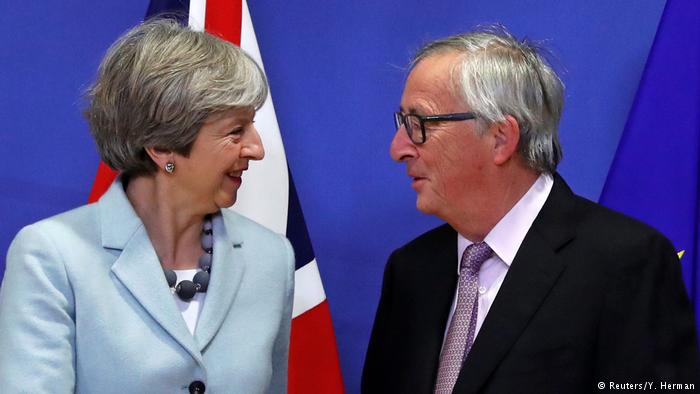 UK Prime Minister Theresa May has called for a security treaty between the EU and Britain “to protect all EU citizens.” European Commission chief Jean-Claude Juncker said security ties between the two will be upheld.

British Prime Minister Theresa May on Saturday said a “bespoke” security agreement between the United Kingdom and European Union was needed to avoid “damaging and real world consequences” for people in both regions.

Speaking at the Munich Security Conference (MSC), May said she recognized that there is currently no security agreement between any third country and the EU that “captures the real breadth and depth” of the UK and EU’s relationship.

“We must now move with urgency to put in place the treaty that will protect all EU citizens wherever they are in Europe…To make this happen will require real political will on both sides,” May said.

The British prime minister emphasized that the UK was still committed to Europe’s security, but if no agreement was reached, speedy extraditions under the European Arrest Warrant “would cease” and information sharing would be hampered.

“It has always been the case that our security at home is best advanced through global cooperation working with institutions that support that, including the EU,” May said.

“As we leave the EU and forge a new path for ourselves in the world, the UK is just as committed to Europe’s security in the future as we have been in the past,” she added.

May said the major challenge for the UK and EU today was “finding a way to work together … to retain the cooperation we have built.”

“The threats we have do not recognize the border between individual nations or discriminate between them,” she said.

Regarding the European Court of Justice, May said the UK would “respect the remit” of the ECJ when working with EU agencies, in return for “respect for our unique status as a third country.”

“But as a country outside the European Union, we will have our own sovereign legal order, so the European Court of Justice will no longer have jurisdiction in the United Kingdom,” she said.

As MSC chairman Wolfgang Ischinger opened up the floor to questions for May, he took the opportunity to make a comment about it being easier if the UK remained within the EU.

May responded saying a second referendum was not an option.

“We are leaving the EU. There is no question of a second referendum … We gave the decision to the British people and they have a right to believe their politicians,” May said.

“People in the UK feel that if they take a decision, governments shouldn’t turn around and say ‘you got that wrong, have another go next time,'” she later added.

EU ‘not at war with the UK’

Responding to a question regarding the role economics would play in security policy, Juncker said the security link between the UK and the EU must be upheld, but that the issues of security and economy should be considered separately.

“I believe, since we are not at war with the UK and since we do not want to take revenge on the UK for what the British people have decided, this security bridge between the UK and the EU will be maintained — we still need it,” Juncker said.

“However you cannot mix up [these questions]. You have to look individually. I do not want to mix up security policy considerations with other considerations,” he added.