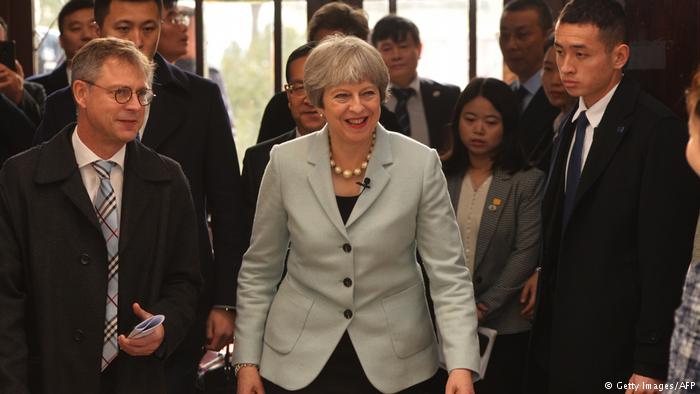 Theresa May has landed in China to seek new trade ties for the UK’s future outside of the EU. May has also promised parliament will approve the final Brexit terms following Tuesday’s leak of a confidential impact report.

British Prime Minister Theresa May touched down in the central Chinese city of Wuhan Wednesday with her sights set on the UK’s future outside of the European Union.

Accompanied by a delegation of 50 British business leaders, May’s visit will focus on hashing out new global trade links ahead of the UK’s divorce from the European Union, slated for March 2019.

“There are huge trade opportunities in China that we want to help British businesses take advantage of,” the Prime Minister said ahead of the trip.

Bolstering ties with China has become increasingly urgent for the UK in the run-up to Brexit. May has pledged to take the country out of the EU’s single market and customs union so that it strike its own trade deals with major economies like China and the US, ideally by the time of the Brexit cut-off date. In 2016, trade between the two countries totaled 59 billion pounds (€67 billion, $83 billion), with the UK exporting just 17 billion pounds-worth of goods and services to China. By contrast, UK exports to the EU that year were worth 236 billion pounds, making up 43 percent of all the country’s exports.

China “is delivering a new source of capital that – with the appropriate safeguards in place – can help us to invest in the future of our country,” May wrote in an op-ed in the UK’s Financial Times newspaper earlier this week. “Together, that means a stronger British economy and more and better jobs for British workers.”

China, in turn, is hoping that London will endorse its Belt and Road Initiative (BRI), an ambitious infrastructure project aimed at reviving the Silk Route trade routes between China and Europe.

May’s visit will see her meet with Chinese Premier Li Keqiang later on Wednesday and with President Xi Jinping the following day, before finishing her trip in Shanghai on Friday.

May desperate to stem Brexit fears at home

May also promised on Wednesday that lawmakers would receive an official analysis of the UK’s final Brexit deal for approval.

On Tuesday, “Buzzfeed” leaked an embarrassing Brexit impact document  that claimed the UK would be worse off, with or without a deal, post Brexit.

Parliament has already been assured that the terms for UK’s withdrawal from the EU would be subject to a vote. However, if lawmakers were to reject the terms of the Brexit agreement, it would leave the UK crashing out of the bloc with no future partnership in place.

May urged not to turn blind eye to rights abuses

While business sits at the top of May’s agenda, the Prime Minister also said she would take the opportunity to discuss a range of other issues with Chinese officials, including the North Korea nuclear threat and climate change.

However, May has already come under pressure to address the political situation in former UK colony Hong Kong and human rights abuses on the Chinese mainland.

In an open letter to the Prime Minister’s office, former Hong Kong governor Chris Patten warned the island was facing “increasing threats to the basic freedoms, human rights and autonomy” that its citizens were promised following its handover back to China in 1997.