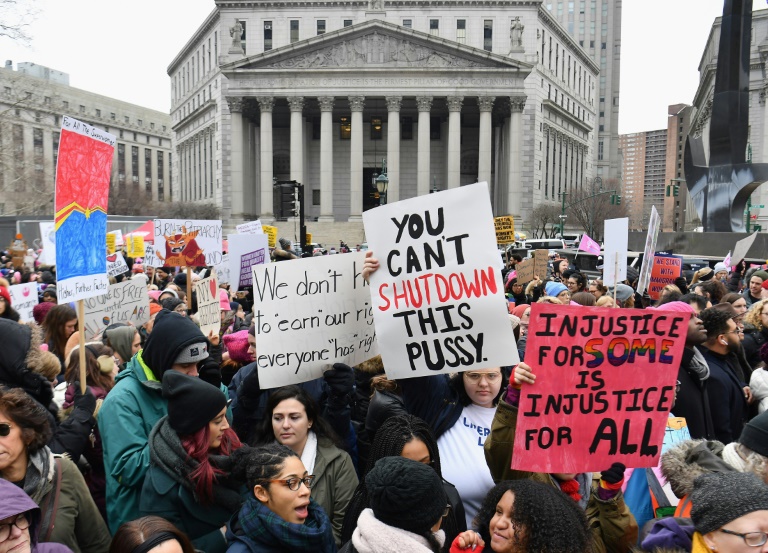 Thousands of women marched Saturday in the US capital and across the country to convey a now-annual message opposing Donald Trump and supporting women’s rights, but internal divisions appeared to steal some energy from the rallies.

In Washington, demonstrators arriving by car, bus or subway converged on the city’s Freedom Plaza and marched defiantly past the nearby Trump International Hotel on Pennsylvania Avenue.

“We need to stand up for women all over the world — for races, gender, sexual orientation,” said Ann Caroline, 27, herself wearing a pink hat.

Some marchers carried posters portraying Trump as a Russian “puppet.” Others decried his comments about women or minority groups, while many demanded his impeachment.

Just blocks away, the president spoke to reporters outside the White House before traveling briefly to Dover, Delaware for a ceremony to receive the remains of four Americans killed in an attack claimed by the Islamic State group in Syria. He made no public comment about the marches.

As in earlier years, thousands of women joined demonstrations in cities across the United States, and around the world, though most turnouts appeared far short of the earlier women’s events.

In New York, several hundred people converged on Manhattan’s Foley Square, near the Brooklyn Bridge. Many more took part in a separate march in Central Park organized by women angered by what they saw as the anti-Semitism of one women’s march leader.

Alexandria Ocasio-Cortez, the newly elected Democratic congresswoman who has emerged as a progressive favorite and a bugbear of conservatives, spoke at both New York rallies.

“Last year we brought the power to the polls, and this year we need to make sure that we translate that power into policy,” she said at the Central Park rally, to loud cheers. “That means we won’t let anyone take our rights away.”

Among the protesters was Nydia Leaf, an energetic, pink-hatted 86-year-old taking part in her third women’s march.
AFP / Angela Weiss Counter-protesters hold signs against the Women’s Unity Rally at Foley Square in New York City, after the movement faced allegations of anti-Semitism

She told AFP she would “keep opposing Donald Trump and his policies. Look at what he’s done at the border, look at the shutdown — every year there is a new atrocity.”

In contrast to the 2017 march, which drew more than three million nationwide, and last year’s event, when hundreds of thousands rallied, Washington police said they expected perhaps 20,000 demonstrators this year.

Fewer than 1,200 marched in Chicago, that city’s Tribune reported. Internal divisions in Seattle resulted in three separate marches taking place, but police said only 4,000 to 5,000 people turned out, compared to an estimated 100,000 in 2017, the Seattle Times said.

Ties to Nation of Islam

The original marches in January 2017 helped spark a rise in women’s political activism, with a record 131 women serving in the new US Congress.

Last year, many women were galvanized by the confirmation of conservative judge Brett Kavanaugh to the US Supreme Court, despite allegations that he committed sexual assault as a teen.

Activists are also motivated by the fight over the Trump administration’s policy — since suspended — of separating undocumented parents from children at the border with Mexico.

But the movement has been riven by controversy, including allegations of anti-Semitism and poor accounting of funds, and weakened, no doubt, by a general sense of political exhaustion.

The anti-Semitism controversy stems from march co-founder Tamika Mallory’s ties to controversial Nation of Islam leader Louis Farrakhan and her failure to condemn disparaging remarks about Jews he made at an event she attended.

Teresa Shook, the first woman to float the idea of a women’s march, has called for the movement’s four co-presidents — Mallory, Carmen Perez, Linda Sarsour and Bob Bland — to resign.

Sarsour pushed back, saying in a statement: “The Women’s March exists to fight bigotry and discrimination in all their forms — including homophobia and anti-Semitism.”

For her part, Ann Caroline called the controversy “heartbreaking,” but added that to march for women’s rights “doesn’t mean that I align myself with the founders’ values.”

Ocasio-Cortez told New York marchers that the November election meant “the start of our advocacy.”

“We just captured the House,” she said, “and now we got to show what we are going to do with it.”

Women's March organizers call for 'A Day Without a Woman'