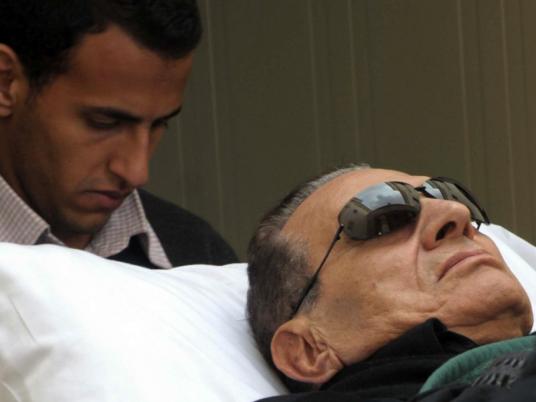 Accusations of high treason made by several public figures against Hosni Mubarak and other formal officials have been referred to the Public Prosecution.

Those accused of high treason include Mubarak, former spy chief Omar Suleiman, former prime minister and current presidential candidate Ahmed Shafiq, and current Prime Minister Kamal al-Ganzouri, as well as prime ministers who served under the ousted president since he assumed office in 1981.

They accused Mubarak of breaching his political and moral obligations by using his vast powers to serve his personal, rather than public, interests.

Mubarak exhibited loyalty to Israel to appease Washington in a way that damaged his country’s sovereignty and security, the petition said, explaining the former president’s decision to release Israeli spy Azzam Azzam.

Mubarak did not have any vision for domestic or foreign policy during his reign, and only wanted to hold onto power long enough to pass on the presidency to his younger son, Gamal, the accusations said. The petitioners also condemned Egypt’s deal to export natural gas to Israel at below-market rates and Mubarak’s approval of Israel’s war on Hizbullah in 2006 and Gaza in 2009, as well as his contribution to maintaining Israel’s blockade of the Gaza Strip.

The petitioners also accused Mubarak of providing military support to the US during the Gulf War and failing to amend what they called “unfair” articles in Egypt’s peace treaty with Israel.

Mubarak would not have committed these crimes without the assistance of government officials who neglected their constitutional responsibilities and merely rubber-stamped his decisions, the petition said.

Mubarak awaits a verdict on 2 June on charges of ordering the killing of protesters during the 25 January uprising that forced his resignation.