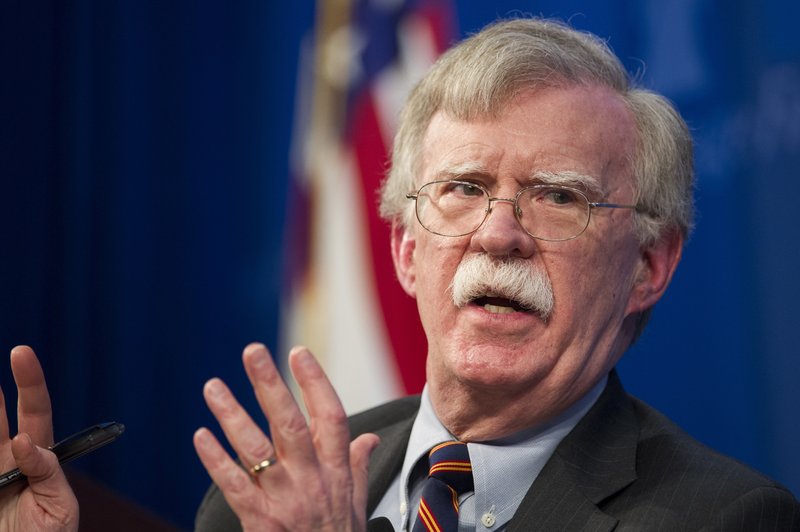 JERUSALEM (AP) — President Donald Trump’s national security adviser, John Bolton, said Sunday that the US military withdrawal from northeastern Syria is conditioned on defeating the remnants of the Islamic State group, and on Turkey assuring the safety of Kurdish fighters allied with the United States.

Bolton, who traveled to Israel to reassure the US ally of the Trump-ordered withdrawal, said there is no timetable for the pullout of American forces in northeastern Syria, but insisted it’s not an unlimited commitment.

“There are objectives that we want to accomplish that condition the withdrawal,” Bolton told reporters in Jerusalem. “The timetable flows from the policy decisions that we need to implement.”

Those conditions, he said, included the defeat of remnants of IS in Syria, and protections for Kurdish militias who have fought alongside US troops against the extremist group.

Bolton’s comments mark the first public confirmation that the drawdown has been slowed, as Trump faced widespread criticism from allies and the resignation of Defense Secretary Jim Mattis for a policy that was to have been conducted within weeks.

Trump announced in mid-December that the US will withdraw all of its 2,000 forces in Syria. Trump’s move has raised fears over clearing the way for a Turkish assault on Kurdish fighters in Syria who fought alongside American troops against IS extremists. Turkey considers the Syrian Kurdish People’s Protection Units, or YPG, a terrorist group linked to an insurgency within its own borders.

Bolton, who is to travel on to Turkey on Monday, said the US is insisting that its Kurdish allies in the fight against the Islamic State group are protected from any planned Turkish offensive. He is to deliver a warning to Turkish President Recep Tayyip Erdogan this week.

“We don’t think the Turks ought to undertake military action that’s not fully coordinated with and agreed to by the United States,” Bolton said. He said in meetings with Turkish counterparts, he will seek “to find out what their objectives and capabilities are and that remains uncertain.”

Trump has stated that he would not allow Turkey to kill the Kurds, Bolton said. “That’s what the president said, the ones that fought with us.”

Bolton said the US has asked its Kurdish allies to “stand fast now” and refrain from seeking protection from Russia or Syrian President Bashar al-Assad’s government. “I think they know who their friends are,” he added, speaking of the Kurds.

He said Chairman of the Joint Chiefs of Staff Gen. Joseph Dunford would continue negotiations with his Turkish counterparts this week to seek protection for America’s Kurdish allies in Syria.

Additionally, Ambassador Jim Jeffrey, who has been serving since August as the special representative for Syrian engagement and was named last week as the American special envoy for the anti-Islamic State coalition, is to travel to Syria this week in an effort to reassure the US’s Kurdish allies that they are not being abandoned, Bolton said.

Bolton said US troops would remain at the critical area of al-Tanf, in southern Syria, to counter growing Iranian activity in the region. He defended the legal basis for the deployment, saying it’s justified by the president’s Constitutional authority, adding “I’m a strong believer in Article II.”

The US is also seeking a “satisfactory disposition” for roughly 800 Islamic State prisoners held by the US-backed Syrian opposition, Bolton said, adding talks were ongoing with European and regional partners about the issue.

Bolton is to have dinner Israel’s prime minister, Benjamin Netanyahu, Sunday evening to discuss the pace of the US drawdown, American troop levels in the region, and the US commitment to push back on Iranian regional expansionism. Bolton was expected to explain that some US troops based in Syria to fight IS will shift to Iraq with the same mission and that the al-Tanf base would remain.

Bolton also was to convey the message that the United States is “very supportive” of Israeli strikes against Iranian targets in Syria, according to a senior administration official, who was not authorized to publicly discuss Bolton’s plans before the meetings and spoke on condition of anonymity.

Bolton on Sunday also toured the ancient tunnels beneath the Western Wall in Jerusalem’s Old City. He watched a virtual reality tour of the historic site and dined there with his Israeli equivalent, as well as US Ambassador to Israel David Friedman and Israel’s ambassador to the US, Ron Dermer.

Visiting American officials typically avoid holding official meetings in parts of east Jerusalem, which is contested between Israelis and Palestinians. Trump himself, however, also toured the area in a previous visit.

Israel annexed east Jerusalem after capturing it from Jordan in the 1967 war, a move not recognized by most of the international community. Palestinians seek east Jerusalem as the capital of their future state.

Bolton warns Syria against use of chemical weapons